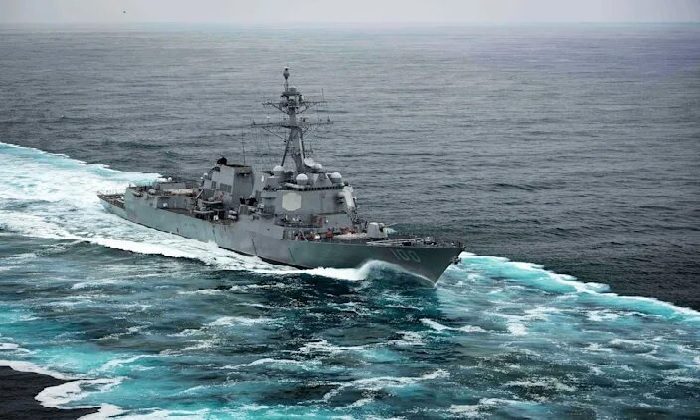 Drones that hovered around U.S. destroyers for hours off the California coast remain unidentified more than a year and a half after the episode, the Navy’s top officer says.

Adm. Michael Gilday, chief of naval operations, spoke about the July 2019 flights Monday at a Defense Writers Group event in Washington. Gilday said the incident — and other similar sightings — were still being assessed.

Asked if the Navy had identified the drones that flew near U.S. warships near the Channel Islands off Southern California, Gilday said: “No, we have not.”

“I am aware of those sightings, and as it’s been reported, there have been other sightings by aviators in the air and by other ships not only of the United States, but other nations — and of course other elements within the U.S. joint force,” Gilday said.

“Those findings have been collected and they still are being analyzed,” he said.

The admiral said there is “a well-established process in place across the joint force to collect that data and to get it to a separate repository for analysis.”

Gilday appeared to be referring to a pending report requested by the Senate Intelligence Committee, which has asked the director of national intelligence, in consultation with the Defense Department, to provide a report by June 25 on unexplained sightings of advanced aircraft and drones documented by the military. The report is supposed to examine whether foreign adversaries are behind the unidentified aircraft.

Asked if the aircraft were “extraterrestrial,” Gilday said he had “no indications at all of that.”

The flights were first reported by The Drive website, based on ship logs and emails released under a Freedom of Information Request. NBC News has obtained the same documents.

As many as six drones flew around the warships at a time in often low-visibility conditions over a number of days, with the drones flashing lights and prompting security precautions onboard.

The drones were able to stay aloft for 90 minutes or more, surpassing the capability of commercially available drones.

According to ship logs, the drones were also able to fly at the same speed as a destroyer traveling at 16 knots in low-visibility conditions, which is defined as less than 1 nautical mile of visibility.

The episode raised the possibility of a serious security breach.

The drone flights took place near San Clemente Island, which is home to sensitive military facilities, including a Navy SEAL training site, a ship-to-shore live firing range and an airfield.

The mysterious drone flights prompted immediate inquiries from investigators and intelligence officers in the Navy and the FBI, including a special agent with the Naval Criminal Investigative Service, the FBI field office in Los Angeles and the director of the Maritime Intelligence Operations Center within the Navy’s 3rd Fleet, according to emails obtained by NBC News.

The emails made it clear that the issue was getting high-level attention, all the way to the office of the chief of naval operations.