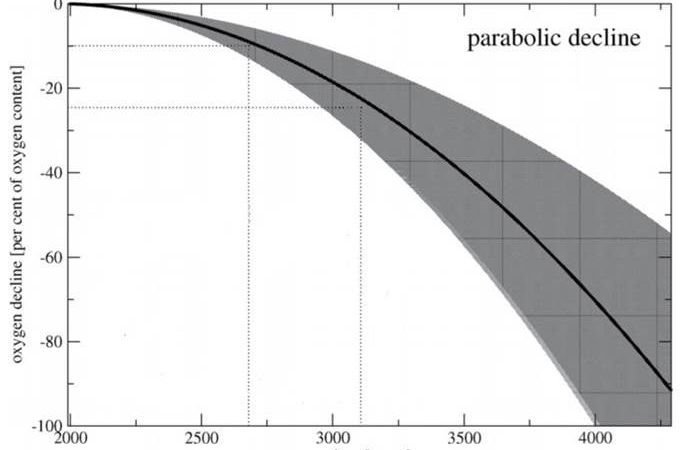 Atmospheric oxygen levels have declined over the past 1 million years, although not nearly enough to trigger any major problems for life on Earth, a new study finds.

The research behind this new finding could help shed light on what controls atmospheric oxygen levels over long spans of time, the researchers said.

“There was no consensus on whether the oxygen cycle before humankind began burning fossil fuels was in or out of balance and, if so, whether it was increasing or decreasing,” said study lead author Daniel Stolper, a geochemistat Princeton University in New Jersey.

In the new study, researchers calculated past atmospheric oxygen levels by looking at air trapped inside ancient polar ice samples. Specifically, they looked at samples from Greenland and Antarctica.

The new estimates suggest that atmospheric oxygen levels have fallen by 0.7 percent over the past 800,000 years. The scientists concluded that oxygen sinks — processes that removed oxygen from the air — were about 1.7 percent larger than oxygen sources during this time.

Although a drop in atmospheric oxygen levels might sound alarming, the decrease the researchers found “is trivial in regard to ecosystems,” Stolper told Live Science. “To put it in perspective, the pressure in the atmosphere declines with elevation. A 0.7 percent decline in the atmospheric pressure of oxygen occurs at about 100 meters (330 feet) above sea level — that is, about the 30th floor of a tall building.”

There are two hypotheses that may help explain this oxygen decline over the past million years, Stolper said.

“The first is that global erosion rates may have increased over the past few to tens of millions of years due to, among other things, the growth of glaciers — glaciers grind rock, thereby increasing erosion rates,” Stolper said.

“Alternatively, when the ocean cools, as it has done over the past 15 million years, before fossil fuel burning, the solubility of oxygen in the ocean increases. That is, the oceans can store more oxygen at colder temperatures for a given concentration of oxygen in the atmosphere,” Stolper said. Oxygen-dependent microbes in the ocean and in sediments can then become more active and consume this oxygen, leaving less of the element in the atmosphere, he added.

Future research can identify what geological processes are consistent with these findings “and thus help to identify the major processes that control atmospheric oxygen levels,” Stolper said.

These findings also reveal what might be a strange contradiction, because it could be assumed that atmospheric carbon dioxide levels should rise as oxygen levels fall — “for example, right now we are consuming oxygen and breathing out carbon dioxide,” said study senior author John Higgins, a geochemistat Princeton.

However, previous research has found that atmospheric carbon dioxide levels have not, on average, changed over the past 800,000 years, Higgins noted. “At first glance, these two sets of observations, both from gases trapped in ice cores, are paradoxical,” he said.

One way out of this conundrum is a well-known but relatively untested concept that suggests “that on timescales longer than a few hundred thousand years, atmospheric carbon dioxide and Earth’s temperature are regulated via a ‘silicate weathering thermostat,'” Higgins said.

The scientists detailed their findings online today (Sept. 22) in the journal Science.