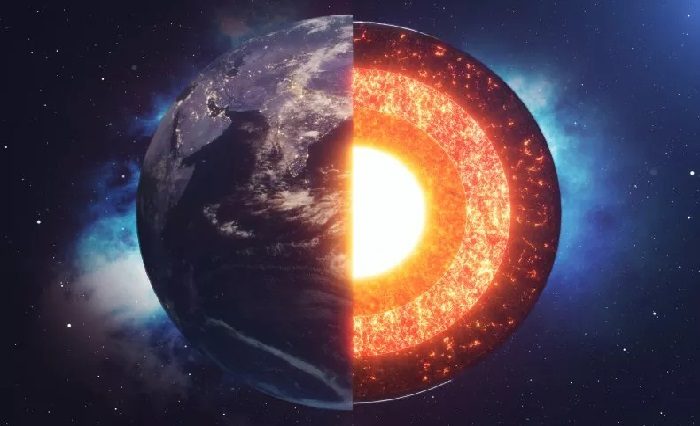 Earth’s Core is in a Weird Superionic State: ‘Quite Abnormal’

“The latest findings could have implications for our understanding of processes that relate to Earth’s core. These include volcanism, earthquakes and Earth’s magnetic field, the authors said.”

BY ORLANDO JENKINSON
via Newsweek
Image Caption/Credit:
Stock image shows artist’s 3D render of a cross section of the Earth. The inner core of the planet reaches temperatures as hot as the surface of the sun and drives key phenomena like the magnetic field and earthquakes.
ROST-9D/GETTY IMAGES

Earth’s inner core is likely a weird composition of superheated elements making it both liquid and solid at the same time, a study has suggested.

The extreme temperatures and pressures found at the center of the Earth were once thought to cumulate in a solid inner core made mostly of iron. This core gives the planet its magnetic field that shields us from solar radiation.

However, research published by scientists with the Institute of Geochemistry at the Chinese Academy of Sciences (IGCAS) in the journal Nature said that various “lighter” elements were likely present at the center of the Earth in a stew of superheated solid and liquid states known as “superionic.”

The materials found in the inner core of the Earth behave in this way due to the extreme conditions found there. Including huge pressure, the temperature at the center of the Earth is believed to be over 10,000 degrees Fahrenheit—as hot as the surface of the sun.

Researchers used the study of earthquake data, known as seismology, to reach their conclusions. The scientists also used quantum mechanics theory, which helps explain how atoms and particles behave at the microscopic level, to create simulations that mimicked the intense pressures and temperatures found at the inner core. Their simulations showed how some alloys transformed into a superionic state when placed under conditions found in the Earth’s inner core.

The findings add to a paper published in Physics of the Earth and Planetary Interiors in December 2021, which also used earthquake readings to suggest that the inner core was likely composed of elements in several different states including “mushy” material.

The latest findings could have implications for our understanding of processes that relate to Earth’s core. These include volcanism, earthquakes and Earth’s magnetic field, the authors said.

“It is quite abnormal,” He Yu, the study’s lead author, said in a statement. “The solidification of iron at the inner core boundary does not change the mobility of these light elements, and the convection of light elements is continuous in the inner core.”