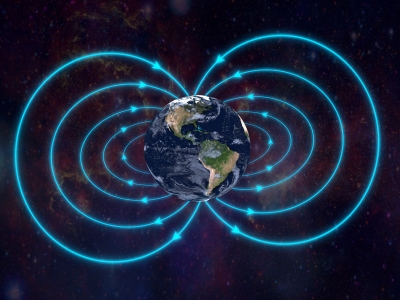 Anyone watching a compass needle point steadily north might suppose that Earth’s magnetic field is a constant. It’s not. Researchers have long known that changes are afoot. The north magnetic pole routinely moves, as much as 40 km/yr, causing compass needles to drift over time. Moreover, the global magnetic field has weakened 10% since the 19th century.

A new study by the European Space Agency’s constellation of Swarm satellites reveals that changes may be happening even faster than previously thought. In this map, blue depicts where Earth’s magnetic field is weak and red shows regions where it is strong: 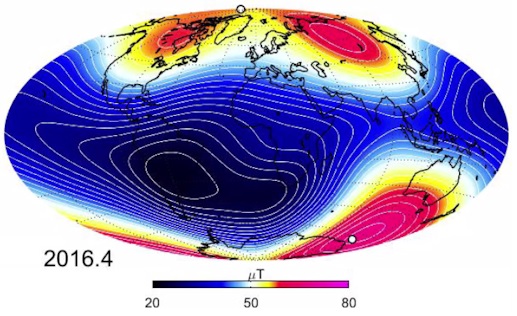 Data from Swarm, combined with observations from the CHAMP and Ørsted satellites, show clearly that the field has weakened by about 3.5% at high latitudes over North America, while it has strengthened about 2% over Asia. The region where the field is at its weakest – the South Atlantic Anomaly – has moved steadily westward and weakened further by about 2%. These changes have occured over the relatively brief period between 1999 and mid-2016.

As remarkable as these changes sound, they’re mild compared to what Earth’s magnetic field has done in the past. Sometimes the field completely flips, with north and the south poles swapping places. Such reversals, recorded in the magnetism of ancient rocks, are unpredictable. They come at irregular intervals averaging about 300,000 years; the last one was 780,000 years ago. Are we overdue for another? No one knows.

Swarm is a trio of satellites equipped with vector magnetometers capable of sensing Earth’s magnetic field all the way from orbital altitudes down to the edge of our planet’s core. The constellation is expected to continue operations at least until 2017, and possibly beyond, so stay tuned for updates.