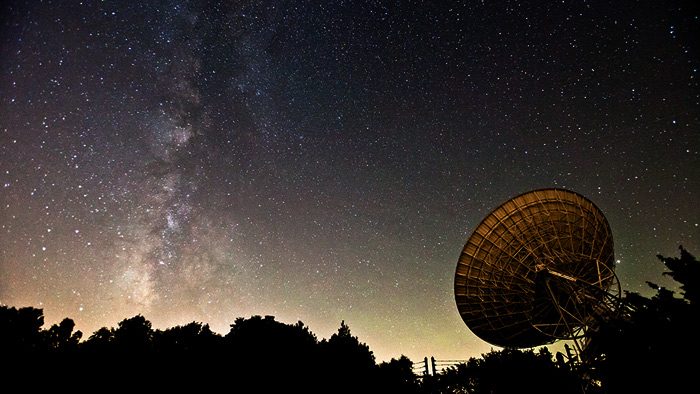 One of the more intriguing unsolved modern mysteries is the fast radio burst (FRB) phenomenon. Over the last several years, radio telescopes on Earth have been detecting more and more very brief, very powerful radio signals which originate from deep space. While astronomers have been able to locate the source of several of these signals, the exact mechanisms of their production remain a mystery. Of course, it has been speculated that they might be attempts at communication made by advanced alien races, or even that they might be a form of alien spacecraft propulsion for deep-space travel.

While it would be nice if these signals were indeed being beamed at us by an alien race, there are possible natural explanations.

Whatever these radio bursts happen to be, astronomers believe that similar signals might indeed be used for communication across vast distances of space. While we haven’t determined that any of them might be a collect call from deep space, one astrophysicist has just published a study which sought to determine whether such signals could indeed encrypt information and if our squishy little human brains could decode them. Turns out we can – with the help of social media, naturally. It is the weird future, after all.

This crowdsourced experiment was conceived by Rene Heller from the Max Planck Institute for Solar System Research, who encrypted seven different pages of information into a simulated alien fast radio burst signal, which can be heard here. The signal’s electromagnetic frequency was set to 452.13 MHz, a figure derived from multiplying pi by the emission frequency of neutral hydrogen atoms. That same frequency was used in Carl Sagan’s Contact, as the values are commonly found throughout the universe. Heller released the message to social media and challenged the public to decrypt it, calling his experiment the “SETI Decrypt Challenge.” The following rules were attached:

Suppose a telescope on Earth receives a series of pulses from a fixed, unresolved source beyond the solar system. The source is a star about 50 light years from Earth. The pulses are in the form of short/long signals and they are received in a very narrow band around an electromagnetic frequency of 452.12919 MHz. A computer algorithm identifies the artificial nature of the pulses. It turns out the pulses carry a message. The pulses signify binary digits. Suppose further that you were, by whatsoever reason, put in charge of decoding this message. If you successfully decrypted the message, you should be able to answer the following questions: What is the typical body height of our interstellar counterparts? What is their typical lifetime? What is the scale of the devices they used to submit their message? Since when have they been communicating interstellar? What kind of object do they live on? How old is their stellar system?

Within just a month, Heller was greeted with a high number of successful decryptions, particularly after the challenge was posted to Reddit. 300 complete replies were received, out of which 66 contain correct solutions, half of which appeared to be derived independently without help. The majority of the correct responses were submitted from the two coasts of the United States and western Europe. When decrypted, the message consists of a binary code which specifies dimensions of a grid. When the message’s data are plugged into the grid, it creates a picture:

The images are composed of 0s and 1s and explain basic facts about an “alien” race.

The image shows the first 10,000 prime numbers, a grey alien, a sine wave, the exomoon Kepler 22b, and an image of the Square Kilometer Array telescope, chosen to simulate the device used by the “alien civilization” which sent the message. The message is similar to the Arecibo message, a radio signal designed in part by Carl Sagan which was beamed from Earth to a nearby star cluster in 1974. The experiment’s author is hopeful that these results demonstrate the power of social media in decrypting possible future messages from alien civilizations. That is, if governments decide to let this kind of discovery to be made public at all.