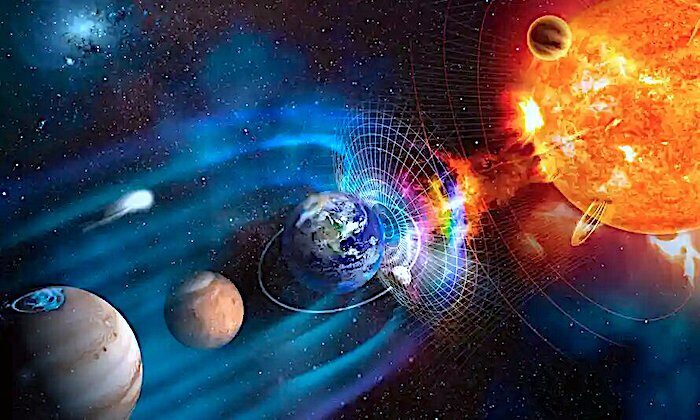 By Nicola Davis
via The Guardian
Headline Image: © Elen11/Getty Images

The flipping of the Earth’s magnetic poles together with a drop in solar activity 42,000 years ago could have generated an apocalyptic environment that may have played a role in a major events ranging from the extinction of megafauna to the end of the Neanderthals, researchers say.

The Earth’s magnetic field acts as a protective shield against damaging cosmic radiation, but when the poles switch, as has occurred many times in the past, the protective shield weakens dramatically and leaves the planet exposed to high energy particles.

One temporary flip of the poles, known as the Laschamps excursion, happened 42,000 years ago and lasted for about 1,000 years. Previous work found little evidence that the event had a profound impact on the planet, possibly because the focus had not been on the period during which the poles were actually shifting, researchers say.

Now scientists say the flip, together with a period of low solar activity, could have been behind a vast array of climatic and environmental phenomena with dramatic ramifications. “It probably would have seemed like the end of days,” said Prof Chris Turney of the University of New South Wales and co-author of the study.

The team have collectively termed this period “the Adams event”, a nod to Douglas Adams, the author of the Hitchhiker’s Guide to the Galaxy in which 42 was said to be the “answer to the ultimate question of life, the universe and everything”.

Writing in the journal Science, Turney and his colleagues describe how they carried out radiocarbon analyses of the rings of ancient kauri trees preserved in northern New Zealand wetlands, some of which were more than 42,000 years old.

This allowed them to track over time the rise in carbon-14 levels in the atmosphere produced by increasing levels of high energy cosmic radiation reaching the Earth during the Laschamps excursion. As a result they were able to date the atmospheric changes in more detail than offered by previous records, such as mineral deposits.

They then examined numerous records and materials from all over the world, including from lake and ice cores, and found that a host of major environmental changes occurred at the same time as the carbon-14 levels peaked.

“We see this massive growth of the ice sheet over North America … we see tropical rain belts in the west Pacific shifting dramatically at that point, and then also wind belts in the southern ocean and a drying out in Australia,” said Turney.

The researchers also used a model to examine how the chemistry of the atmosphere might change if the Earth’s magnetic field was lost and there was a prolonged period of low solar activity, which would have further reduced Earth’s protection against cosmic radiation. Ice core records suggest such dips in solar activity, known as the “grand solar minima”, coincided with the Laschamps excursion.

The results reveal that the atmospheric changes could have resulted in huge shifts in the climate, electrical storms and widespread colourful aurora.

As well as the environmental changes potentially accelerating the growth of ice sheets and contributing to the extinction of Australian megafauna, the team suggest they could also be linked to the emergence of red ochre handprints, the suggestion being that humans may have used the pigment as a sunscreen against the increased levels of ultraviolet radiation hitting the Earth as a result of the depletion of ozone.

They also suggest the rise in the use of caves by our ancestors around this time, as well as the rise in cave art, might be down to the fact that underground spaces offered shelter from the harsh conditions. The situation may also have boosted competition, potentially contributing to the end of the Neanderthals, Turney said.

The Earth’s magnetic field has weakened by about 9% over the past 170 years, and the researchers say another flip could be on the cards. Such a situation could have a dramatic effect, not least by devastating electricity grids and satellite networks.

Richard Horne, the head of space, weather and atmosphere at the British Antarctic Survey, who was not involved in the work, said the chemical changes in the upper atmosphere predicted by the study chimed with what had been measured at Halley research station in Antarctica during strong but short-lived events in which energetic particles were emitted from the sun.

But could the environmental effects have been as severe as the team predict? “Maybe not as extreme, but it gives you pause for thought,” said Horne, noting that it was unlikely the Earth’s magnetic field would disappear completely.

Dr Anders Svensson of the University of Copenhagen, however, said that ice cores from Greenland and Antarctica do not show evidence of any dramatic climate change that occurred around the time of the Laschamps excursion, but that did not rule out it having an impact. “Changes in the ozone layer and the impact of increased UV radiation on humans is not something we can confirm or reject from ice cores,” he said.

Chris Stringer, who studies human origins at the Natural History Museum in London, said the work was important. He said the greater use of caves as shelter was plausible, but that the link to a rise in cave art was less convincing because paintings of pigs were apparently being produced in Sulawesi in Indonesia well before the Laschamps excursion.

“The authors also make a link with the physical extinction of the Neanderthals around 40,000 years ago and I think it could certainly have contributed to their demise. But they did survive longer and ranged more widely than just Europe, and we have a very poor fix on the timing of their final disappearance across swathes of Asia.”

Dr Richard Staff, a research fellow in quaternary geochronology at the University of Glasgow said the study was exciting, and noted that it could lead to further investigation into the environmental and evolutionary effects of other, larger dramatic downturns in the Earth’s magnetic field strength further back in time.