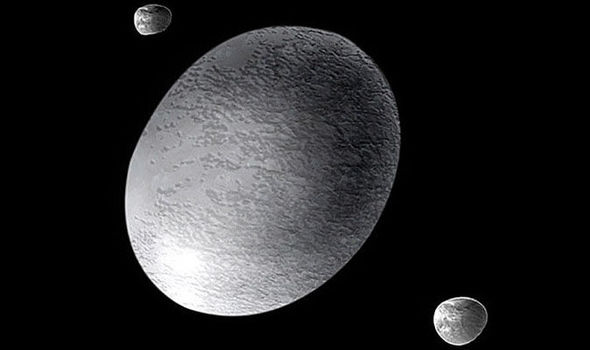 Fast-Rotating EGG PLANET with Temperatures of -241C Exists Behind Pluto

The odd egg-shaped dwarf planet known as Haumea which spins incredibly quickly fast is orbiting the sun past Pluto.

The tiny planet is something of an anomaly as its equatorial diameter is twice as long as its polar diameter.

This ratio of lengths, 2:1, is the most extreme world astronomers know of.

It is also the fastest rotating planet in the Solar System, with a day on Haumea only lasting just 3.9 Earth hours. 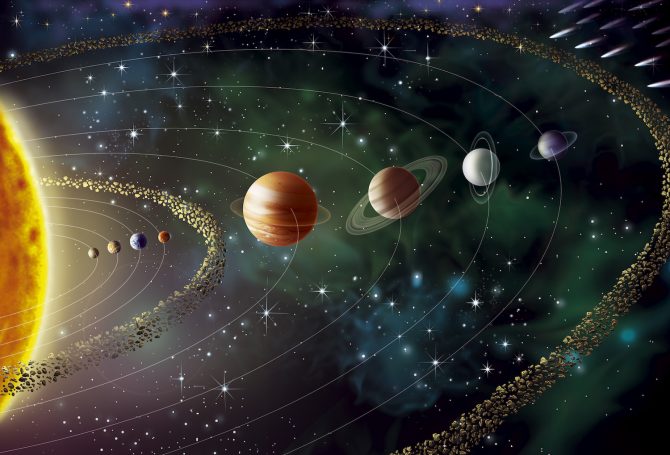 Haumea is located in the far out asteroid belt

However, it takes an astonishing 283.3 Earth years for the dwarf planet to complete an orbit of the Sun.

Nasa said: “The quick spin elongated the dwarf planet into the unique shape astronomers discovered in 2003.

“It is roughly the same size as Pluto. Like Pluto and Eris, Haumea orbits our Sun in the Kuiper Belt, a distant zone of icy objects beyond the orbit of Neptune.

“It is possible a massive impact billions of years ago set off Haumea’s spin and created its moons.

“Haumea’s known moons are Hi’aka and Namaka. Astronomers believe Haumea is a made of rock with a coating of ice.”

Although it is the flattest object that scientists have discovered to date, astronomers believe that some planets in the universe could almost be like a pancake, with an equatorial to polar diameter ratio of 5:1 if the planet is made entirely of uranium.