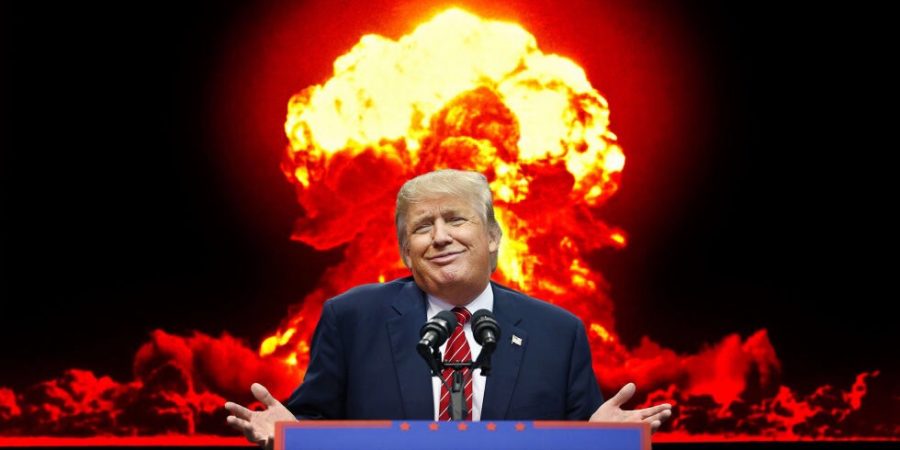 Inside his football field-size warehouse an hour’s drive southeast of Dallas, Gary Lynch is busy trying to keep up with orders for his solid-steel bomb shelters. 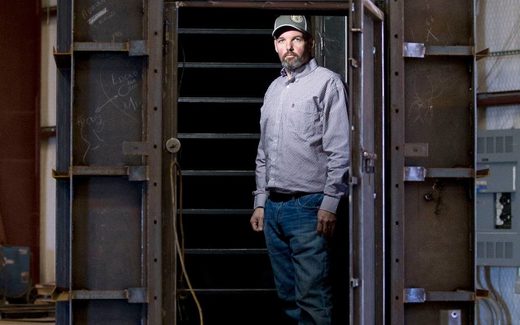 He offers visitors a tour of a 600-square-foot model under construction for a Saudi customer.

Right now, it’s just a steel shell, he said, but when the work is done it will be a luxurious underground bunker with a master bedroom, four bunk beds, a composting toilet, a living room with satellite television capability, filtered air and water, and a storage closet with room for months of food.

Lynch explains that orders for his most expensive shelters, which can cost as much as several million dollars, have increased since the November election.

“It definitely has picked up a little as Donald Trump emerged as president,” said Lynch, general manager of Rising S Co. on the outskirts of the rural city of Murchison. Lynch said some customers even half-jokingly say they’re trying to protect themselves from a “Trumpocalypse” or “Trumpnado.”

“There’s some people who maybe even voted for Donald Trump and may be worried some of the riots are going to get out of hand and there’s going to be social or civil unrest,” he said.

“Then you’ve got people who didn’t vote for him and are thinking that now that he’s president maybe he’s going to start a war. There’s definitely been some renewed interest from people since the election.”

Doomsday prepping — the act of stockpiling food and other essentials in a reinforced, often-underground shelter — used to be mostly associated with Libertarian-leaning Americans who feared their own government would turn on them.

But now that Trump has taken office, some centrists and left-leaning folks also are building bomb shelters under their homes and businesses, apparently fearing either civil strife or war with an external enemy.

Sales of Rising S’s most luxurious shelters have jumped 700 percent in recent months, he said. Lynch didn’t provide specific data on how many units he typically sells, but he said Rising S Co. recorded about $14 million in sales during the past year.

Although Lynch credits Trump’s surprising rise to power for the latest sales spike, he said a similar jump in sales occurred eight years ago when President Obama took office.

He has been building shelters for 13 years.

“When a Republican is president, the left wants to buy a bunker,” he said. “It’s the opposite when a Democrat is president.”

The phrase “#Trumpocalypse” has taken on a life of its own on social media such as Twitter.

And a quick search online shows many other examples of people taking advantage of Trump’s knack for controversy to sell their fare.

For example, in Pearsall, south of San Antonio, a Craigslist seller named Dan was offering used buses for $3,000 to $5,000, and explaining on his advertisement that “They make good Trump Bunkers and Bomb Shelters.”

“You Know Who’s Finger will be on the Button,” the ad continues. “Make America Great Again. Buy a Bus. All are welcome. Pro Donald. Pro Hilary. (sic) Can we all be friends again?”

America has a long history of building bomb shelters, going back to the days of the Cold War with the Soviet Union shortly after World War II.

In the 1950s and 1960s, thousands of home owners built underground escape rooms — something that was encouraged by President John F. Kennedy, a Democrat who presided over the 1962 Cuban Missile Crisis that nearly brought the U.S. and Russia to nuclear blows.

America’s bunker mentality is the stuff of movies and historical lore. The desire for blast-proof walls, filtrated air and water, and composting toilets is deeply embedded in the national psyche.

And, although it’s an issue that typically only comes up during a leadership change, domestic strife or a global crisis, the desire to be safe from harm — to have a place where loved ones can hunker down indefinitely — seems to always burn in the nation’s collective belly.

It’s a different story with storm shelters, similar structures that can be built either underground or as a “safe room” within a home. Storm shelters tend to grow in popularity after a major disaster such as the tornado in 1997 that killed 27 people in the Central Texas city of Jarrell, or the one two years later that killed 36 people in the Oklahoma City area.

According to the Lubbock-based National Storm Shelter Association, which applies its official seal to shelters that meet high construction and design standards, “sales are half what they were three years ago,” executive director Ernst Kiesling said.

After a major incident such as a tornado or hurricane, Federal Emergency Management Agency money can sometimes be made available to offset some of the cost of shelter construction, depending upon how states and cities use the federal funds.

But the demand for shelters usually only lasts about as long as the cleanup, Kiesling said.

“After an incident, there will be an upsurge among the public, but it it will subside rather quickly,” he said.

Storm shelters can be underground, or they can be built at ground level in a home. They can be made of steel, fiberglass or other materials.

Although they typically don’t have the long-term accommodations for people to live in indefinitely, like a bomb shelter, storm shelters can also provide residents with a “safe room” to escape dangers such as gunfire or a home intruder.

But usually it’s concerns about enemies of the state — whether foreign or domestic — that motivates someone to install a bunker in their home or business.

Peter Westwick teaches a class on the atomic age at the University of Southern California, and he sometimes shows his students a photo that he took just a few years ago of a commercial building in Los Angeles called Atlas Survival Shelters. The otherwise-nondescript metal building featured an outside display of a bright yellow bomb shelter the size of fuel truck.

The photo illustrates how little has changed about Americans’ concerns for the long-term security of their republic since the 1950s, he said.

“I sometimes use a picture I took of a shelter manufacturer here in L.A., just off the 5 freeway, to show these fears haven’t gone away,” Westwick said in an email. “But they have changed, to a broader doomsday/survivalism instead of just nuclear fear.”

Of the current interest in shelters, Westwick said, “I think you could indeed say that the losing side in election often takes a catastrophic view of the outcome. You might consider the migration to the Idaho, Montana, Wyoming region by conservative or Libertarian adherents following Obama’s election.

“There’s an issue here with whether the survivalists fear an external enemy (e.g. the Soviet Union, albeit aided by Communists in American society) or an internal one (e.g. the Idaho survivalists apparently fearing their own government and fellow citizens).

“The current fears seem to be more of Trump provoking an external enemy, whether another state or stateless terrorists,” he said.

Steve Huffman, founder of the Reddit social news aggregate site, acknowledged in a recent New Yorker story that he is obsessed with surviving a catastrophe.

In that same article, many other wealthy elite from New York, San Francisco and other tony places say they’re stocking up on gas masks, motorcycles (more nimble and fuel-efficient than cars during a crisis) and other essentials to escape from the expected confusion and panic that likely would envelope and overtake those who had failed to prepare.

But bomb shelters don’t have to break the bank.

Some manufacturers offer closet-size underground bunkers for as little as $5,000.

At Rising S Co., Lynch said he and his roughly 40 employees can’t sell anything that cheap. They use the finest, Alabama-made steel and an air purification system with a patent pending on its design — and materials like that come at a cost.

Rising S Co.’s shelters also feature a water purification system that can be designed to pull water from an underground well, a municipal water system or a storage tank.

But Lynch said he can set up customers with an entry-level shelter approximately 4 feet by 6 feet for roughly $10,000.

In fact, he has one of those basic models under construction right now in his warehouse off Texas 31 in Murchison, right alongside the underground virtual palace his crew is building for that wealthy Saudi customer.