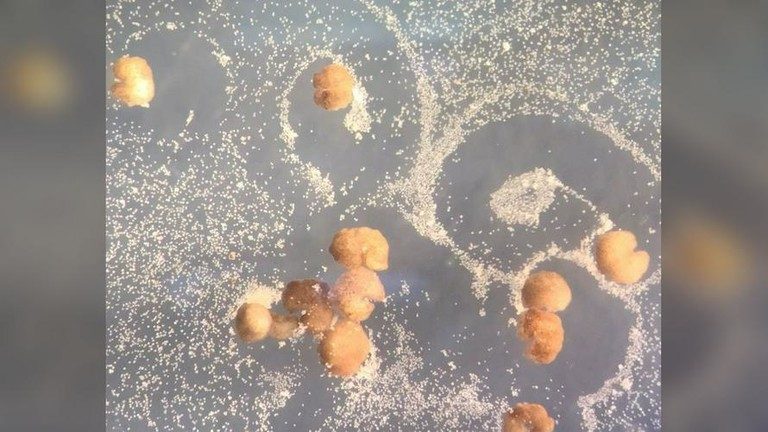 “The Pac-Man shaped “parent Xenobots” ended up giving rise to not just one, but several generations…”

Miniscule biological machines developed by scientists from the cells of frogs – commonly referred to as Xenobots – can now self-replicate, according to a new scientific report.

The Xenobots were made public in a report last year, which suggested the self-repairing technology could be used to replace degradable materials such as concrete, steel, and plastic. Then, in March, it was revealed that the organisms had been improved to be able to remember their surroundings and assemble into a single swarm.

Now, an article published in the PNAS journal on Monday suggests that the Xenobots are able to self-replicate.

Joshua Bongard, one of the co-authors of the new report, claimed that “with the right design” the organisms “will spontaneously self-replicate,” and proposed that the technology could be used to tackle future pandemics and speed up vaccine production.

Sam Kriegman, a lead author of the study, described the process as an entirely new form of self-replicating, noting that “no animal or plant known to science replicates in this way.” The Xenobots were conditioned to procreate by a supercomputer which came up with just the right shape of ideal ‘parents’ after months of laboring at the task, the researcher said. Even though the design, which bears some similarity to Pac-Man, looked counter-intuitive and too “simple,” it proved to be extremely progenitive.

Bongard explained that the speed of replication plays a crucial role for the practical applications of the bots.

“If we can develop technologies, learning from Xenobots, where we can quickly tell the AI: ‘We need a biological tool that does X and Y and suppresses Z,’ —that could be very beneficial,” Bongard explained.

While Bongard insisted that the benefits of the supposedly breakthrough technology outweigh the risks, several reports have raised ethical concerns surrounding Xenobot technology. It has even been suggested that they could be turned into a military bioweapon and assassination tool.