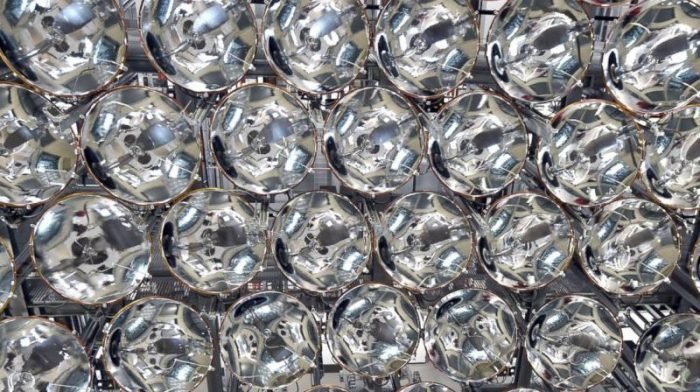 Synlight is the largest collection of film projector spotlights ever assembled in one room, and scientists in Germany are turning them all on at once in the pursuit of efficient and renewable energy.

This experiment involving the world’s “largest artificial sun” is taking place in Jülich, a town located 30 kilometers (19 miles) west of Cologne, and it was designed by scientists from the German Aerospace Center (DLR). The device features 149 industrial-grade film projector spotlights, and each one boasts roughly 4,000 times the wattage of the average light bulb.

When this artificial sun is turned on, it generates light that’s 10,000 times as intense as natural sunlight on Earth. Swiveling the lamps and concentrating them on one spot can produce temperatures of around 3,500 degrees Celsius (6,332 degrees Fahrenheit), which is three times as hot as the heat generated by a blast furnace.

LET THERE BE LIGHT

Every day, a huge amount of energy hits the Earth in the form of light from our Sun. While we do already have ways to harness the Sun’s energy, such as through solar panels, much of it still remains untapped. Scientists hope their experiments with Synlight will illuminate ways to tap into that wasted energy.

The experiment is not without its risks and costs, however. “If you went in the room when it was switched on, you’d burn directly,” Bernard Hoffschmidt from the DLR told The Guardian. To avoid that, the experiment will take place inside a protective radiation chamber. This artificial sun consumes a vast amount of energy when powered up, as well — a four-hour operation eats up as much electricity as a four-person household would use in a year — so it is expensive.

This will all be worthwhile, however, if the Synlight experiment leads to more efficient and cleaner energy for the future. The first goal is to determine the optimal setup needed to use sunlight to power a reaction that produces hydrogen fuel — a potential clean fuel source for cars and airplanes. “We’d need billions of tonnes of hydrogen if we wanted to drive [airplanes] and cars on CO2-free fuel,” Hoffschmidt explained. “Climate change is speeding up so we need to speed up innovation.”

In the future, the facility may be used to test the durability of space travel parts when blasted by solar radiation, so not only could Synlight help us deal with our energy crisis here on Earth, it could help us explore worlds far beyond our own, too.