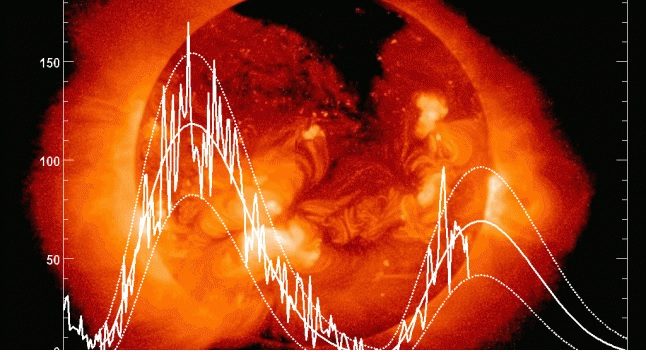 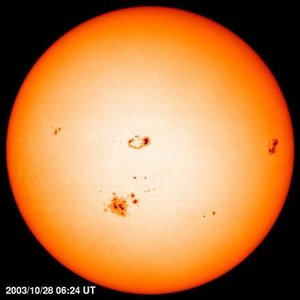 © NASA
On our star, the Sun, the sunspots are seen in a belt around the equator. Sunspots are cool areas caused by the strong magnetic fields where the flow of heat is slowed.

In the time before the current period of faith-based science, much good work was done on the role of the Sun in controlling climate. One of the best monographs from that time of innocence is Hoyt and Schatten’s The Role of the Sun in Climate Change, published by Oxford University Press in 1997. That book starts with this paragraph:

About 400 years before the birth of Christ, near Mt. Lyscabettus in ancient Greece, the pale orb of the sun rose through the mists. According to habit, Meton recorded the sun’s location on the horizon. In this era when much remained to be discovered, Meton hoped to find predictable changes in the locations of sunrise and moonrise. Although rainy weather had limited his recent observations, this foggy morning he discerned specks on the face of the sun, the culmination of many such blemishes in recent years. On a hunch, Meton began examining his more than 20 years of solar records. These seemed to confirm his belief: when the sun has spots, the weather tends to be wetter and rainier.

So the idea that sunspots and the solar cycle control climate is at least 2,400 years old. In the modern era, the appreciation of sunspots started again in 1610 with telescopic observations by Galileo, Thomas Harriot and others. The solar cycle was discovered by Samual Schwabe in 1843 after 17 years of observations, though William Herschel’s correlation of sunspots and the wheat price in England dates from 1801. A 2003 paper by Pustilnik and Din entitled Influence of Solar Activity on State of Wheat Market in Medieval England confirmed Herschel’s observation.

The idea that the Sun controls climate is easy enough to understand. In fact the Earth’s climate is exquisitively sensitive to changes in solar output, as shown in Nir Shaviv’s 2009 paper Using the Oceans as a Calorimeter to Quantify the Solar Radiative Forcing. Professor Shaviv found that the total radiative forcing associated with solar cycles variations is about 5 to 7 times larger than just those associated with the TSI variations.

We know what causes individual sunspots – something to do with magnetic flux tubes rising to the solar surface due to bouyancy. But the cause of the solar cycle itself had remained a mystery until the recent publication of the second edition of Evidence-Based Climate Science, edited by the indefatigable Don Easterbrook. The first edition, published in 2011, contained a paper by Ed Fix, retired B-52 pilot from Ohio, entitled The Relationship of Sunspot Cycles to Gravitational Stresses on the Sun: Results of a Proof-of-Concept Simulation, which demonstrated the modulation of the solar cycle by the gas planets. The second edition expands on that with a co-authored paper (Ed and myself) entitled Aspects of Solar Variability and Climate Response which details the relative contribution of those planets.

It has long been suspected that the solar cycle is largely influenced by Jupiter due to the closeness of the average length of the solar cycle of 11 years and the orbital period of Jupiter of 11.86 years. In 1984, Schwentek and Elling noted that “the clearly dominant spectral band in sunspot number, the solar cycle of 10.8 years, is given by the configuration period of Jupiter and Saturn (19.859 yr) times the ratio of their distances from the Sun (0.545).” Just over a decade later, Attila Grandpierre confirmed that whatever was causing the solar cycle must be extrinsic to the Sun – which leaves the planets as the causative agent.

Ed Fix’s 2011 paper was important because it provided a physical explanation for solar cycle behaviour. Many of the then observation-derived rules for explaining the fundamental properties of the sunspot cycle had not been quantified until that paper. To a large extent, existing solar science is based on non-mathematical observation, evidenced by Dikpati’s and Hathaway’s various predictions of solar cycle amplitude. The 2011 paper’s treatment of the sunspot cycle as an ideal spring driven by changes in radial acceleration provided a new paradigm. At the same time, this new model is consistent with the solar dynamo theory.

Ed Fix’s model explains why, for extended periods, successive increases in solar cycle amplitude are seen before the system gets out of phase and phase destruction occurs. Individual Hale cycles are not discrete magnetic events. The quantum of flux preserved in the system is the basis for the amplitude of the following cycle. Thus the sunspot cycle memory effect is explained.

The model also explains the Waldemeir effect – that strong cycles reach a maximum of amplitude in the shortest period of time. It also explains the amplitude-period effect (the anti-correlation between the peak amplitude of a cycle and the length of the preceding cycle) and the amplitude-minimum effect (the correlation between cycle amplitude and the activity level at the previous minimum). Ed Fix’s model hindcasts almost perfectly and that very close match, despite the model’s simplicity, suggests that a lot of confidence could be placed in what it is predicting.

Some have doubted the planetary basis of the solar cycle due to the weak effects of the individual planets on the Sun. That is certainly borne out by the work done for the 2016 paper. Figure 1, from that paper, shows that by itself Jupiter has little effect on solar variability:

Figure 1: Simulation model with Jupiter only compared to the full model

Similarly, Figure 2 running the model with only Saturn shows a similarly low amplitude response though with Saturn’s 29 year orbital period instead of Jupiter’s 12 years:

Figure 2: Simulation model with Saturn only compared to the full model

So, if Jupiter and Saturn have little effect on the Sun by themselves, as predicted by many, what does cause the solar cycle? This is the mystery that has not been explained until now.

It turns out that the interaction of Jupiter and Saturn causes most of the solar cycle. The effect on the Sun of these two planets is synergistic rather than additive as shown by Figure 3. It has been said that mathematics is the language of physics. What has been elucidated by this paper is the mathematical basis of the solar cycle.

Figure 3: Simulation model with Jupiter and Saturn compared to the full model

Where to from here? Well, there is another big mystery remaining about the Sun. The hemispheres have different activities that are preserved on a multi-cycle basis. That is shown in the following figure:

It seems that the next step will be to make a 3D version of Ed Fix’s model.