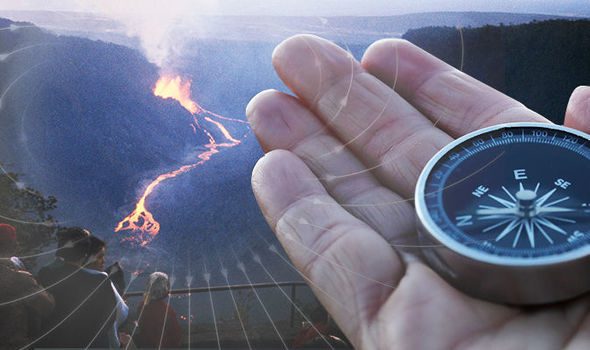 I wonder if this has any connection to the numerous UFO sightings that are reported near volcanoes..

Mount Kilauea, Hawaii’s erupting volcano, has a magnetic field which flows in the OPPOSITE direction to the rest of the planet, scientists have discovered.

The bizarre finding, which sends compasses into an uncontrollable spin, had scientists baffled – while locals linked it to Hawaiian folklore which attaches deep spiritual significance to the massive volcano which is almost one million years old.

But now the reason for the magnetic volte-face has been explained – and it’s even more mind-blowing.

According to geologists the molten rock below the Mount Kilauea caldera contains vast amounts of iron and is effectively a sea of floating magnets.

But the sea of iron magnets below Mount Kilauea were now cooled and trapped in the now solid rock – with their poles facing the opposite way to everything else on the planet.

Studies into lava flows both below and above the Earth’s surface are slowly unlocking the reasons why the planet’s field flips every so often.

Brad Singer, a geology professor at the University of Wisconsin-Madison, who investigates lava flow magnetic fields, said: “When the lava flows erupt and cool in the Earth’s magnetic field, they acquire a memory of the magnetic field at that time.

“It’s very difficult to destroy that in a lava flow once it’s formed. You then have a recording of what the paleofield direction was like on Earth.”

He added that the flip occurs during periods of declining strength of the Earth’s magnetic field and that the planet was rapidly approaching another one.

Co-researcher Kenneth Hoffman California Polytechnic State University at San Luis Obispo and UW-Madison who has been researching field reversals for over 30 years.

Hoffman and Singer are focusing on rocks that contain evidence of times that the main north-south field has weakened, which is one sign that the polarity may flip direction.

Singer said: “Current evidence suggests we are now approaching one of these transitional states because the main magnetic field is relatively weak and rapidly decreasing.

“While the last polarity reversal occurred several hundred thousand years ago, the next might come within only a few thousand years.

“Right now, historic records show that the strength of the magnetic field is declining very rapidly. From a quick back-of-the-envelope prediction, in 1,500 years the field will be as weak as it’s ever been and we could go into a state of polarity reversal.

“One broad goal of our research is to provide some predictive capability for what could happen and what could be the signs of the next reversal.”