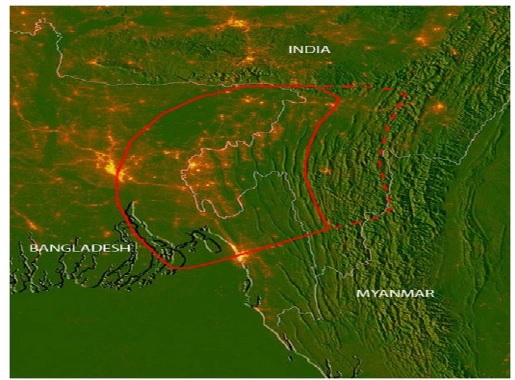 A massive fault could trigger a cataclysmic earthquake beneath Bangladesh, parts of east India and Myanmar, new research suggests.

The hidden fault, which has been buried under miles of river sediment, could release an earthquake of magnitude 8.2 to 9.0 in one of the most densely populated regions of the world, the study found. And because researchers discovered the system relatively recently, they have no estimates for when such a megaquake could occur.

“We don’t know if it’s tomorrow or if it’s not going to be for another 500 years,” said study co-author Michael Steckler, a geophysicist at the Lamont-Doherty Earth Observatory at Columbia University in New York City.

In the low-lying, waterlogged country of Bangladesh, the mighty Ganges and Brahmaputra rivers meet and form the world’s largest delta, eventually draining into the Bay of Bengal. The flow of these two massive rivers deposits a gigaton of sediment every year, the researchers said. This constant overlay of sediment obscured the geology below the Ganges Delta. But in recent years, scientists have learned that tectonic plates are colliding beneath the eons worth of sediment.

To get a better picture of how the plates buried deep below the surface were moving, Steckler and his colleagues worked with researchers at Dhaka University in Bangladesh to install ultrasensitive GPS devices throughout Bangladesh between 2003 and 2014. They combined this data with plate-motion data collected from India and Myanmar, creating a map of the entire fault region.

The GPS network revealed that one plate is diving under the other deep beneath the surface in an area encompassing Bangladesh and parts of Myanmar and eastern India. (The two plates are likely the Indian Plate and a part of the Eurasian Plate that some call the Burma Platelet, Steckler said.)

At the upper layers of the fault, the two plates are stuck together, building up strain that could produce a megathrust earthquake if it ruptures, the researchers said. Based on the strain data, the team estimates that the fault could unleash a maximum of a magnitude 8.2 to 9.0 earthquake, they reported today (July 11) in the journal Nature Geoscience.

While an earthquake with a magnitude of 8 or greater has the potential to cause damage anywhere in the world, this particular region may be especially vulnerable. The researchers estimate that about 140 million people live within 60 miles (100 kilometers) of the fault, including the 17 million people who live in the crammed megalopolis of the Greater Dhaka Area in Bangladesh.

“I’ve seen them pumping sand to build up the ground level to build a 20-story building,” Steckler told Live Science. “If there’s an earthquake [that ground is] going to liquefy and the building is just going to fall over.”

Not only would the region be incredibly vulnerable to widespread building collapse, but overcrowding could make it difficult to rescue people who survive the initial quake, Steckler said.

“Right now, the streets are clogged with traffic such that it’s impossible to drive around Dhaka on a normal day,” Steckler said. “If you fill the streets with debris, it’s really going to be impossible to get supplies and rescue equipment and things like that around.”

However, right now, the team has no idea if the region is likely to experience a major earthquake anytime soon. The researchers have some evidence of a temblor in 1762 further south from the study area, as well as a quake that may have caused a major river between Bangladesh and Myanmar to switch the direction in which it flowed, but beyond that, the river sediments have buried the geological evidence, and there isn’t historical evidence to provide clues about how frequently these quakes occur.

Countries in the region face many immediate problems — including terrorist attacks, poverty, climate change and corruption — so it’s difficult for politicians to justify expensive seismic retrofitting for a quake that may never come, Steckler said.

To better characterize the region’s risk, the team is building a more detailed map of the shape of the fault, as well as looking at historical tsunami data to understand how often megathrust earthquakes occur, Steckler said.