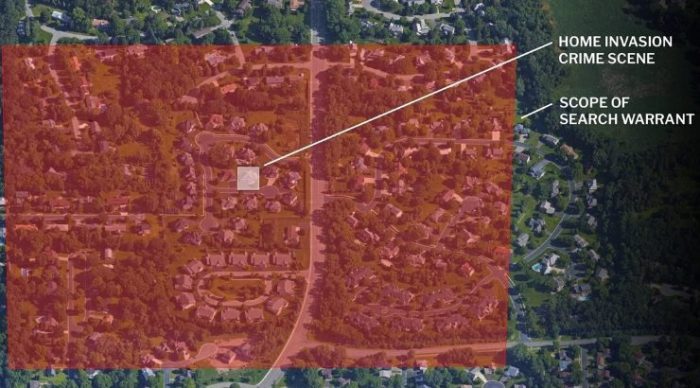 The Gainesville Police Department suspected an innocent man was involved in a burglary so naturally they requested that Google give them all of his location data.

Google’s legal investigations support team wrote to Zachary McCoy telling him that local police were demanding information related to his Google account. Google replied and said it would release the data unless McCoy went to court and tried to block the request, NBC reported.

The man then searched his case number on the Gainesville Police Department website where he found a one-page report on the burglary of an elderly woman’s home ten months earlier on March 29, 2009. Unfortunately for McCoy, the crime occurred less than a mile from the home that he shared with his two roommates.

Caleb Kenyon, McCoy’s lawyer, said he was subject of a “geofence warrant.” A geofence warrant is essentially a virtual dragnet over crime scenes where police request to sweep up Google location data drawn from users’ GPS, Bluetooth, Wi-Fi, and cellular connections from everyone who is near a crime scene.

From this blanket of surveillance law enforcement then try to figure out which phones may be tied to suspects or possible witnesses. According to journalist Tony Webster, “Law enforcement officials say it’s a promising new technique.”

McCoy used an exercise-tracking app, RunKeeper, to record his rides. The app relied on his phone’s location services, that were then fed to Google. He looked up his route on the day of the burglary and saw that he had passed the victim’s house three times within an hour, part of his frequent loops through his neighborhood.

“It was a nightmare scenario,” McCoy recalled. “I was using an app to see how many miles I rode my bike and now it was putting me at the scene of the crime. And I was the lead suspect.”

McCoy ended up fighting back and winning, resulting in the police dropping their warrant request with the help of his lawyer.

But this isn’t the first time a blanket surveillance warrant has been used, last year in New York law enforcement used a “geofence warrant” against the Proud Boys, a group of pro-Trump rightwing extremists after they allegedly beat up four leftist protesters, believed to be associated with Antifa, outside an Upper East Side event. The four protesters refused to cooperate with police, and authorities were unable to identify them.

As part of their attempt to find their identities, prosecutors sent Google a warrant for phone records near the conflict. However, they ended up collecting multiple innocent people around the area under their dragnet as well, even though they had nothing to do with the crime. Exactly like what happened with McCoy.

And in just one year, 22 Google reverse location search warrants were issued in the state of Minnesota alone.

This type of warrant has privacy and civil liberties advocates concerned. They’re noting that the search has constitutional issues due to protections from unreasonable searches. However, police argue the information alone is not enough to justify charging someone with a crime. But in another case in Arizona, a man was mistakenly arrested and jailed for a murder he didn’t commit, which was largely based on Google data received from a geofence warrant.

“Normally we think of the judiciary as being the overseer, but as the technology has gotten more complex, courts have had a harder and harder time playing that role,” said Jennifer Granick, surveillance and cybersecurity counsel at the American Civil Liberties Union about another case of using geofence surveillance. “We’re depending on companies to be the intermediary between people and the government.”