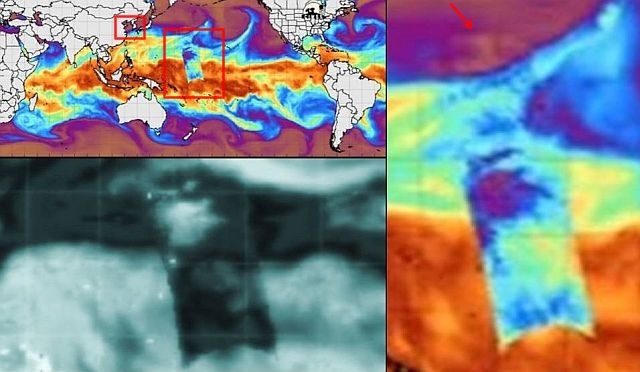 An arc first appears in the data then it extends into this large pulse-like energy beam. It was observed in the Central Pacific aimed in the direction of the Korean/Japan Peninsula on April, 19 2017.

MIMIC picks up radiation and Microwave pulse energy imagery and what we see here is not a solar event or a glitch but this energy pulse is man-made.

If you look at the front of the wave it seems the energy pulse comes straight from a cloaked dish-shaped object which appears and disappears in a split second.

Here is a technology at play which can manipulate the weather or can produce earthquakes in a certain region and they want things to heat up to create a natural disaster of some type like an earthquake, typhoon, tsunami, etc.

Could it be possible, rather than to start a war with North Korea using conventional or nuclear weapons, if you look at the specific spot where the pulse appears that specific North Korea will be hit by a natural disaster soon?

A false flag event is imminent? Waiting to see what happens!

Watch the video below to see the capture of the detected beam.