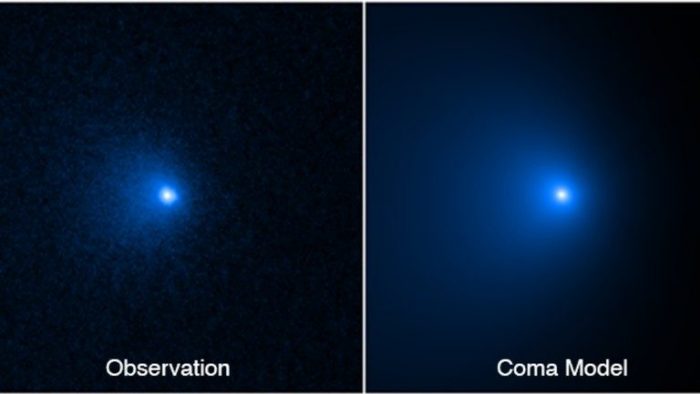 “”We’ve always suspected this comet had to be big because it is so bright despite how far away it is. Now we confirm it is.””

In February, it was reported that the Hale-Bopp had been officially exceeded in size by the new largest comet observed, the Bernardinelli-Bernstein comet, named in honour of the two scientists who discovered it.

NASA has determined the size of the largest comet seen, with the Hubble Space Telescope estimating it to be some 80 miles across, which is bigger than the state of Rhode Island.

According to the American space agency, the comet is shooting through the universe at a speed of 22,000 miles per hour, travelling right from the edge of the solar system and heading right towards Earth.

However, there is no need for mankind to panic just yet, as the Bernardinelli-Bernstein comet “will never get closer than 1 billion miles away from the Sun”, which is somewhere near planet Saturn. Even this point will not be reached by the comet until 2031.

“This comet is the tip of an iceberg for many thousands of comets that are too faint to see in the more distant parts of the solar system,” said David Jewitt, a professor of planetary science and astronomy at the University of California, Los Angeles (UCLA). “We’ve always suspected this comet had to be big because it is so bright despite how far away it is. Now we confirm it is.”

In February, the discovery of this new biggest comet was revealedon the preprint website arXiv. Now, the article about it is published in The Astrophysical Journal Letters.

The new record-breaking comet is believed to be coming from the Oort Cloud – a nesting ground of thousands of comets that is located somewhere on the edge of the solar system. Bernardinelli-Bernstein provides a valuable glimpse at the size distribution of comets in the Oort Cloud, and therefore its total mass.

The previous record holder among comets was C/2002 VQ94, or the Hale-Bopp comet, estimated to be 60 miles across. It was discovered in 2002 by the Lincoln Near-Earth Asteroid Research (LINEAR) project, according to NASA.