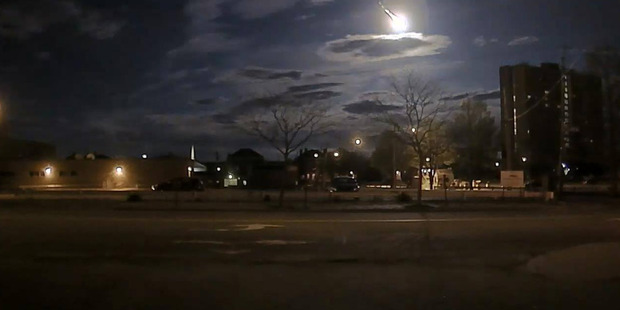 Could the mystery boom have been caused by a meteor, like this one recorded by a dashcam in Portland, in the United States? (seen in the headline image above)

A loud boom which shook houses and alarmed pets in the Bay of Islands is likely to remain a mystery, with a meteor a possible explanation.

Whatever it was, it was strong enough to be picked up by a seismograph used to monitor earthquakes but almost certainly came from the sky.

Residents in Oromahoe, Ohaeawai, Puketona, Kawakawa and Opua reported hearing what sounded like a loud explosion about 6.15pm on Sunday. Others reported a “blinding flash” around the same time.

Serena Jenkins, who lives at Oromahoe, said it was loud enough to shake her home.

“It was amazing. It felt like something had crashed into our house. We went outside straight away but we couldn’t see anything.”

The mystery boom was a hot topic on social media. Theories put forward on the Northland Grapevine Facebook page ranged from blasting at Puketona quarry – the Northern Advocate checked, but they don’t do blasting on Sundays or in the evening – to aliens, thunder or a sonic boom triggered by a meteor.

There were no Fire Service callouts in Northland around that time, ruling out an explosion or fire.

Tauranga residents reported a similar explosion-like noise at 3am on Sunday loud enough to rattle windows, spook pets and prompt a flurry of 111 calls.

In Tauranga’s case, however, the sound was easily explained. According to MetService there were three almost simultaneous lightning strikes at 3.06am on Sunday, creating one particularly loud peal of thunder.But the Bay of Islands boom cannot be explained as easily.

MetService meteorologist Brian Mercer said there were no lightning strikes in Northland on Sunday. His instruments did not always pick up cloud-to-cloud lightning but they were rarely loud enough to be heard, so a thunder storm was unlikely to have been the cause.

Whangarei Planetarium director Peter Felhofer said a meteor the size of a fist would heat up intensely as it entered the atmosphere, creating a flash of light lasting up to a few seconds, before detonating.

However, if it was an exploding meteor powerful enough to shake houses he would have expected it to be much more widely noticed and reported. It would also have been picked up by the national network of seismographs used to measure earthquakes.

The Advocate called GNS Science in Wellington, where a scientist kindly trawled through Sunday’s records from seismographs at Omahuta Forest, Waipu Caves and Great Barrier Island.

Spokesman John Callan said the Waipu Caves seismograph picked up an unidentified 13-second burst of energy just after 6.14pm on Sunday. It was not possible to determine the cause but it was not an earthquake because that would have been picked up by multiple instruments.

Mr Felhofer said the GNS finding indicated the source of the boom was aerial, lending weight to the meteor theory.