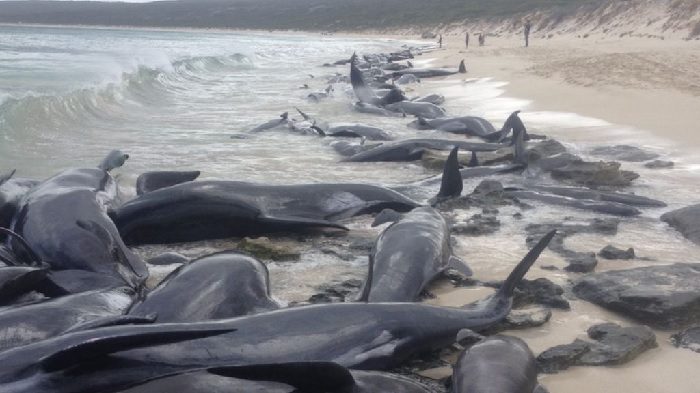 Mass Stranding of Over 140 Whales in Australia, A Few Rescued

Sad stuff, this appears to be one of the more bizarre events in nature. Not sure if this is more a modern issue or if it has been happening throughout time but hopefully we can come up with a way to help them avoid this.

More than 140 short-finned pilot whales died after a mass stranding on a beach in Western Australia on Friday.

A group of around 150 whales became stranded at Hamelin Bay, around 300 kilometers south of the state’s capital city Perth.

Six surviving whales had been returned to the sea as of 7.00 p.m local time (7.00 a.m. ET), Western Australia’s Parks and Wildlife Service said.

“Unfortunately, most of the whales beached themselves on dry land overnight and have not survived,” Incident Controller Jeremy Chick said.

Chick said moving the whales by nightfall was logistically challenging because of the rocky beach terrain and rough seas.

“Once we have moved the whales out we will monitor the situation closely as it is possible the whales will come back into shore and re-strand. This has often been the case in previous mass strandings,” he said.

Authorities said more than 100 local volunteers arrived on site to assist trained vets and officers from Sea Search and Rescue and the Department of Primary Industries and Regional Development.

Melissa Lay, manager of the Hamelin Bay Holiday Park, told Reuters on Friday that it was the second mass stranding she had seen during her 15 years in the area.

“There are some that are still alive but barely,” Lay said. “The last time it happened, none survived.”

Short-finned pilot whales have a dark coloring with a pink underbelly and are known to inhabit tropical and subtropical waters.

Authorities said it was not uncommon for migrating short-finned pilots to get stranded.

The largest mass stranding of whales in Western Austraila took place in 1996, when 320 long-finned pilot whales stranded themselves in the coastal town of Dunsborough.

The incident prompted authorities to issue a shark alert over concerns the carcasses could attract the predators to the shoreline.

It remains unclear why whales and other marine mammals get stranded, but experts say it can be a combination of factors, from old age, illness or injury to accidental navigation errors.

“One of the most common patterns with mass strandings is that one or two whales will initially strand. These animals will send out distress signals and members from their pod may attempt to help or mill slightly offshore. A receding tide will then catch these animals out and soon the whole pod will become stranded.”