If you’re looking for something to take your mind off of the presidential election, this might do the trick. A giant crack has been discovered in the Earth’s magnetosphere – our first line of defense against those pesky cosmic rays that bring down electrical power grids, mess up global positioning systems, garble communications and make your skin look like the last rotisserie chicken in the grocery store oven at closing time. What’s worse, the crack opened over a year ago and we’re just learning about it now. Have you forgotten about who’s running yet?

What happens when that kind of cosmic force meets Earth’s magnetosphere?
According to the report published recently in Physical Review Letters, the protective sphere surrounding the planet was severely dented from 11 to four times the radius of the Earth. Simulations created by the GRAPES-3 researchers showed that the magnetosphere cracked during the two-hour bombardment, allowing lower energy galactic cosmic ray particles to enter the atmosphere. 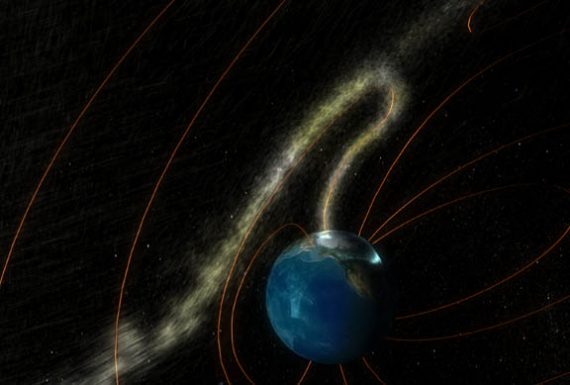 Didn’t anyone notice this on June 22nd, 2015? The data shows a strong geomagnetic storm occurred at the time, causing an aurora borealis and radio blackouts in high-latitude countries near the poles, but nothing disastrous. Did we take a cosmic bullet in an area that only caused a flesh wound? The study suggests this, along with a warning.

The simultaneous occurrence of the burst in all nine directions suggests its origin close to Earth. It also indicates a transient weakening of Earth’s magnetic shield, and may hold clues for a better understanding of future superstorms that could cripple modern technological infrastructure on Earth, and endanger the lives of the astronauts in space.

OK, we’re all concerned occasionally about astronauts on the ISS and Elon Musk doesn’t want the passengers on his Mars ships to arrive at the Red Planet extra-crispy, but what about us on Earth? We all know what kind of problems a loss of the electrical and communications grid can cause and none of us want to wake up to the smell of frying skin. But what’s really disconcerting is that it’s taken over a year for the news of this crack in the magnetosphere to come out. Why did it take so long? What else haven’t we been told about it?

Still worried about the election?