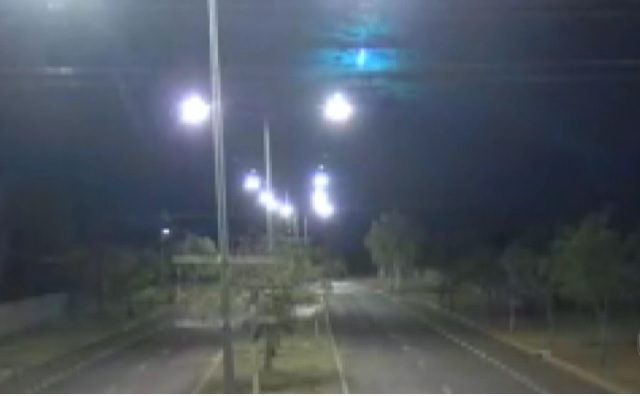 A meteor has lit up the Northern Territory night sky with a flash that created “daylight” in Alice Springs and a noise that shook windows.

“We were a bit dubious about it,” he said.

But then we started looking around our CCTV and the one in Tennant Creek sees this beautiful purple light coming down.

Police received only one report from a town camp resident, saying the light lasted for about five seconds and there was a “massive thunder noise and rumbling like an earthquake”.

Police began making enquiries with other agencies, but then eventually turned to their own cameras.

“We’ve got two CCTV cameras in Alice Springs that actually caught it, but one in Tennant Creek that shows it travelling through the sky as it hurtles towards the ground,” he said.

Superintendent O’Brien said he was surprised more people didn’t make reports to police, but put it down to it happening late on a Sunday night and the region having had thunderstorms over the weekend.

Talkback callers told ABC Alice Springs the light and sounds were intense.
Once caller, Alex, said he saw the light through his bedroom window.

“It was a bright light through the window, went dull a bit and then very bright, a quick flash but really bright, sort of a brilliant golden yellow,” he said.

“You could see everything, and I thought ‘Gee that seemed to be really close’.”

Another caller, Sally, said the noise sounded “like a big giant stomping on the ceiling”.