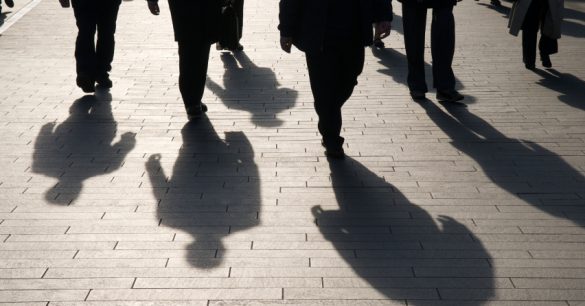 As someone who writes books, gives lectures, and posts articles here at Mysterious Universe, I get a lot of feedback. For the most part, it comes from people who want to share their experiences, ask questions, or offer their opinions on the things I have written about. Occasionally, however, I’ll find myself on the receiving end of a communication (or several) from someone claiming an “Insider”-type background. A whistle-blower, in other words. It doesn’t happen as often as more than a few have assumed. I don’t get asked to meet people “in the know” in underground parking areas at midnight. And, I have never been invited to view a bunch of dead aliens held in a secure, fortified bunker. And…well, you get the picture.

There have, however, been a few occasions when my path has crossed with that of enigmatic characters whose backgrounds did indeed place them in the world of certain, covert activities – all connected to UFOs, in one way or another. This occurred most graphically when I was researching and writing my books, On the Trail of the Saucer Spies, Body Snatchers in the Desert, and Final Events. But, Body Snatchers was published back in 2005, Saucer Spies in 2006, and Final Events in 2010. In other words, more than quite a while ago. Beyond that, and aside from the occasional tidbit, I really don’t get “Deep Throat”-type figures knocking on my door.

But, just a few days ago, it happened again. In this case, it came in the form of a “Unknown Caller” phone-call in the early afternoon.
The elderly man at the other end of the line said that he had read my books Men in Black and Women in Black and wanted to share something relevant. It all revolved, he said, around the notorious Philadelphia Experiment of 1943. So, before I got on with the story, here’s a bit of background on that controversial event (or non-event, depending on your opinion).

Back in 1955, Morris K. Jessup’s book, The Case for the UFO, was published. It was a book that delved deeply into two key issues: (a) the theoretical power-source of UFOs, and (b) the utilization of the universal gravitational field as a form of energy. Not long after the publication of the book, Jessup became the recipient of a series of extremely strange missives from a certain Carlos Miquel Allende, of Pennsylvania. In his correspondence, Allende (a very unreliable and discredited figure) commented on Jessup’s theories. He also gave details of an alleged secret experiment conducted by the U.S. Navy in the Philadelphia Naval Yard in October 1943. Thus was born the highly controversial saga of what has become known as the Philadelphia Experiment.

According to Allende’s incredible tale, during the experiment a warship was rendered optically invisible and teleported to – and then back from – Norfolk, Virginia in a few minutes. The incredible feat was supposedly accomplished by applying Albert Einstein’s never-completed Unified Field theory. Allende elaborated that the ship used in the experiment was the DE 173 USS Eldridge; and, moreover, that he, Allende, had actually witnessed one of the attempts to render both the ship and its crew invisible from his position out at sea on-board a steamer called the SS Andrew Furuseth.

If Allende was telling the truth, then the Navy had not only begun to grasp the nature of invisibility, but it had also stumbled upon the secret of teleportation of the type demonstrated years later – in fictional, on-screen format – in The Fly. On these very matters, Allende made the disturbing claim that the experiment rendered many of the crew-members as mad as hatters. Others, supposedly, vanished from the ship while the test was at its height, never to be seen again. Others reportedly suffered horrific and agonizing deaths.

For the record, I don’t believe at all that a number of the crew were plunged into the future – that’s just complete rubbish. Nor do I believe that, for years afterwards, the surviving sailors would briefly vanish from view, then return from their states of temporary invisibility. But, I am open to the possibility that perhaps some kind of experiment may have gone ahead. It may have provoked bizarre hallucinations and made it appear as if extremely strange things were afoot on the ship. We’re talking about a far more down to earth experiment, but which had unforeseen effects on the minds of a very small number of the crew. Why I think that is something I will discuss in another article, in the next couple of weeks.

All of which brings us back to the matter of Mr. “Unknown Caller.” Like me, he had no time for the teleportation- or time-travel-based scenarios. But, what he did believe was certainly as controversial. Perhaps, even more so. He claimed that in the early 1980s he was given the opportunity to read U.S. Navy files that told the “real” story of the Philadelphia Experiment. He was extremely cagey on verifiable facts (no surprises there, I have to say…), but maintained that the experiment had a bearing on the aforementioned MIB and Women in Black. I asked: “In what way?”

His reply was that the experiment – the precise nature of which he would not comment on – created what he called “a shift” that allowed those aboard to see certain things that, in a normal state, they, you and I would not see. But, which are supposedly around us all the time. We’re talking about the MIB, WIB and even what have become popularly known in recent years as the Shadow People. So the tale went, the stories of crew-members vanishing, or becoming fused into the metal of the ship itself, were very wide of the mark. They were, I was assured, wildly distorted accounts of the crew seeing MIB, WIB and Shadow People walking through walls, becoming invisible, and then reappearing. But, that it didn’t take long before the “truth” of the matter became a tale of vanishing sailors.