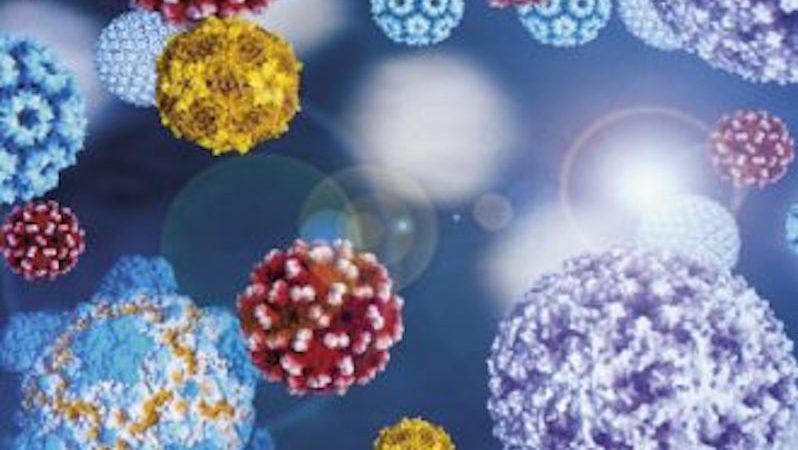 Why do people commonly go out of their way to do something nice for another person, even when it comes at a cost to themselves—and how could such altruistic behavior have evolved? The answer may not just be in our genes, but also in our microbes. 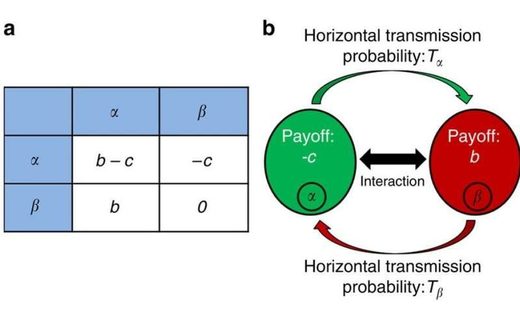 © Lewin-Epstein et al. Nature Communications
(Left) The payoff matrix and (right) an illustration of horizontal transmission probability of microbes between hosts. Using this model, researchers have found that microbes may induce their hosts to help other hosts, benefitting the microbes and the other hosts, but not always the original hosts.

In a new paper, researchers Ohad Lewin-Epstein, Ranit Aharonov, and Lilach Hadany at Tel-Aviv University in Israel have theoretically shown that microbes could influence their hosts to act altruistically. And this influence could be surprisingly effective, with simulations showing that microbes may promote the evolution of altruistic behavior in a population to an even greater extent than genetic factors do.

“I believe the most important aspect of the work is that it changes the way we think about altruism from centering on the animals (or humans) performing the altruistic acts to their microbes,” Hadany told Phys.org.

It’s already well-known that microbes can affect the behavior of their hosts, with a prime example being how the rabies virus increases aggressive behavior in infected individuals. Research has also shown that the microbiome—the community of microorganisms that inhabit our gut—can even manipulate the hosts’ social behavior by infecting neurons and altering neurotransmitter and hormone activity.

Against this backdrop, the researchers in the new study have proposed that microbes may induce a person to help others because the close physical contact (for example, food-sharing, co-sheltering, and grooming) increases the transmission of the microbes from one person to another. So when someone does something nice for us, we are not just the recipient of a kind act, but also of their microbes.

To show that this idea can have a prevailing effect on a population over time, the researchers designed simulations of interacting individuals, some with altruism-inducing microbes, and some without. Then using a prisoner’s dilemma payoff scheme, the researchers investigated what happens to this population, its microbes, and its altruistic behavior over many generations.

The results showed that, as long as horizontal transmission (between individuals) of microbes is allowed, altruism-inducing microbes can take over the population, leading to microbe-induced altruism. This result occurs even when only a very small percentage of the population initially carries these altruism-inducing microbes. The simulations also revealed that the evolution of altruism is successful because the microbes have a chance to either meet genetically related microbes in the recipient or infect and transform some of the recipient’s microbes into relatives.

In a variation of this model in which altruism can also be induced by host genes, the researchers found that genetically encoded altruism does not evolve, but microbe-induced altruism continues to evolve whether or not genetic factors are present. Further simulations showed that, although there are some cases in which altruism encoded in genes can persist, microbe-induced altruism persists more often. Overall, the results suggest that microbes may play a dominant and previously overlooked role in the evolution of altruistic behavior.

If microbes do exert such large sway on altruistic behavior, then it raises other intriguing questions, such as whether antibiotics, probiotics, and foods affecting the microbiome may influence the altruistic behavior of their hosts. In the future, the researchers plan to address these possibilities, as well as to test the theory.

“We are now collaborating with experimental biologists in order to empirically validate the predictions of our theory,” Hadany said.