This image captured by a space watcher from the UK shows what looks like a ‘structured’ space craft in the vicinity of Europa, the sixth-largest moon in the Solar System.

This is the moment a UFO appears in space near the largest planet in the solar system.

According to space watchers this image is proof once and for all that there is alien life out there and in a part of space that humans haven’t quite been able to reach.

This footage posted by Secure Team shows the images that were captured on a Canon 650D camera with a 7D-300mm telescopic lens mounted on a tripod in someone’s back garden.

The video shows a close up of the image sent to the UFO watchers by British man Louis Read who was so amazed at his find he sent it for a second opinion.

According to the film the space craft comes close to Europa, one of planet Jupiter’s 63 moons , and has never been seen in the sky until now. 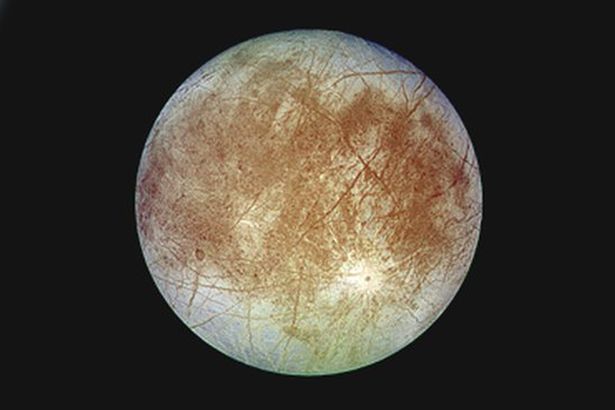 Aliens: Jupiter’s moon Europa is said to have had a visit from the UFO

After spotting the unusual site the experts then increased the exposure and say they think it is either one giant alien structure or could be a fleet of UFOs going about their business.

Secure Team are convinced there is a life on Jupiter – a planet made up of gas and ice – and they believe that there could be an ‘under water’ word that plays host to a variety of life forms.

NASA and other space agencies have yet to travel as far as Jupiter in their quest for information about what happens in the Solar System – but they are planning to send a probe out there.

Currently they are involved in a series of experiments on the red planet Mars – and currently have their Curiosity Rover beaming back images on a regular basis.