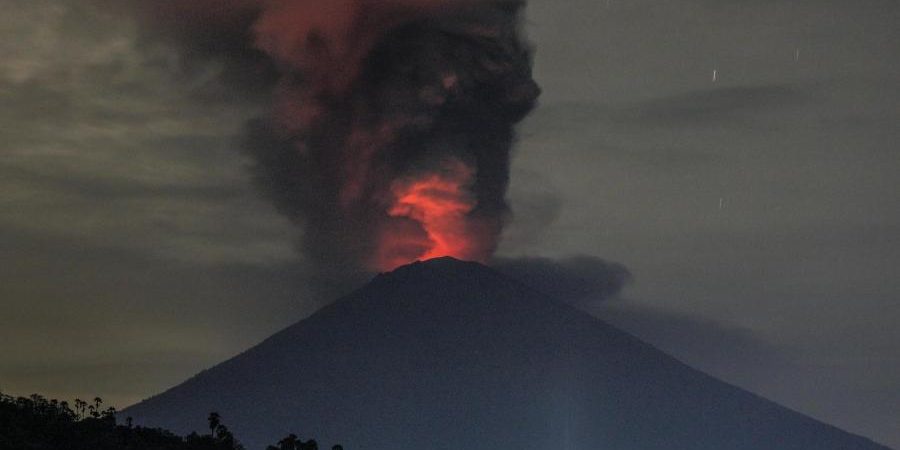 Nighttime flashes in Japanese weather satellite imagery around Mt. Agung as a new eruption began on 27 November 2017. The flashes occur at 19:50, 20:10, and 20:30 UTC. The city lights have been added separately from previous observations from a different satellite, to assist in nighttime geolocation; the village lights of Besakih, on the southwest slope of Mt. Agung, can be seen within the dashed circle.

Thinking this was just sensor noise, I examined other areas for similar flashes, and saw none. But after reviewing nighttime imagery over the last week, I saw similar behavior during the early stages of the eruptions on Nov. 25 & 26. The flashes appear first, and then the ash cloud appears. Since the eruption plume does not show up in nighttime imagery until it has reached a sufficient altitude to be cold enough to show up in infrared sensors, it seems the lightning is more prevalent early in the eruption (assuming that’s what this is). [See UPDATE below…probably not lightning].

So, there might be a new eruption of Agung in progress. Last I checked the news, however, I saw nothing. [UPDATE: After my original post, Foxnews started streaming video of a new eruption in progress as the sun was rising.]

UPDATE: It appears that the flashes are not lightning, but are either (1) hotspots in the 3.9 micron portion of this product, a channel which is also used to detect wildfires, or (2) some portion of the eruption cloud that has low emissivity at 3.9 microns. Evidence for the latter possibility is that if you look at the early stages of a different volcano eruption in GOES-12 imagery documented here, there is a hotspot (in this case, color-coded as dark) in the 3.9 micron imagery, but then two bright flashes appear as the eruption begins.

[This post has been edited from the original as I have discovered the flashes are likely not lightning, but some other phenomenon.] 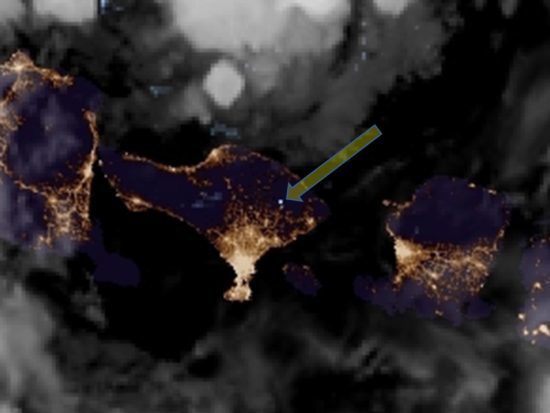