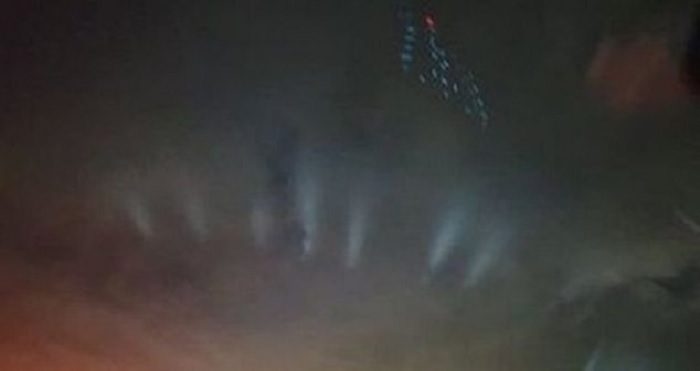 Mysterious Lights Witnessed in the Sky over UK

“We were just driving and saw these weird lights in the sky, I couldn’t really explain it…”

A woman who had been traveling with her partner along the M6 recently photographed something unusual in the sky.

Kelly Thompson and Stuart Marshall had been driving between Liverpool and Manchester on November 18th at around 6:45pm when they spotted something in the sky above them.

The phenomenon, which consisted of dots, lines and streaks, had the appearance of something being projected upwards from the ground, however there was no sign of anything within the vicinity of the lights that could explain what was producing them.

“We were just driving and saw these weird lights in the sky, I couldn’t really explain it,” said Kelly.

“At first I thought it was something projecting into the sky from the floor but I kept looking everywhere and couldn’t see anything.”
“When then drove directly under them and I took pictures because I couldn’t explain it. I was baffled. I was in the car with my partner and he could see it too and was wondering what it was.”

After the encounter, she checked online to look for possible explanations but could find none.

“I started trying to Google what I had seen, but it’s hard to put into words, you know,” she said.

“I also spoke to my friends about it and the first thing they said was ‘oh, it’s a UFO’, but I’m on the fence with that kind of thing.”