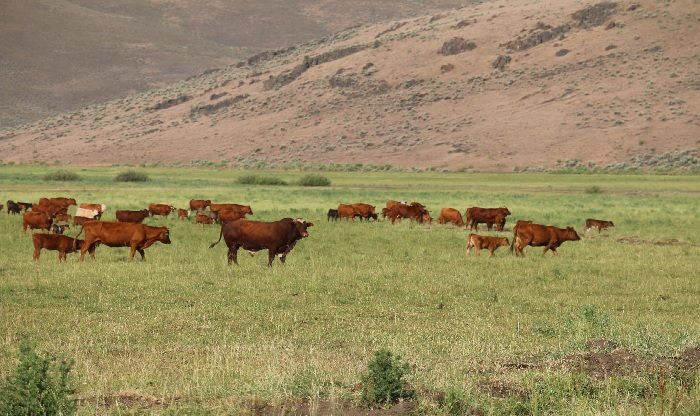 When the first dead bull turned up at the end of July, it didn’t raise an alarm at the Silvies Valley Ranch.

Cattle sometimes die suddenly on the ranch’s 140,000 acres in Harney County — struck by disease or felled by a broken leg and unable to find a way out of the rugged, forested terrain.

But by the time ranch hands discovered four more dead bulls within 24 hours, they knew they were likely dealing with deliberate, premeditated killings.

They’re still baffled by the circumstances. There were no wounds. No signs of a struggle. And the bulls’ genitals and tongues had been carefully removed.

The killing and mutilation of the 4 and 5-year-old Hereford bulls in the prime of their productive lives has since spurred a multi-agency investigation in eastern Oregon, but detectives have turned up no leads and haven’t yet even settled on a cause of death.

“How somebody put these bulls on the ground at what would be arguably a fairly close range — and to do it in a way that didn’t leave any signs, no trace evidence, no footprints, no struggle marks from the animal, no broken limbs — I have no idea,” said Colby Marshall, vice president of the Silvies Valley Ranch.

The mystery deepens because there’s no obvious reason someone would want those animal parts. They aren’t prime targets for black market sales, authorities said.

The deaths are eerily similar to a rash of livestock killings and mutilations across the West in the 1970s, when hundreds of cows and bulls turned up dead, also of seemingly unknown causes and with their genitals and tongues missing.

Back then, theories ran the gamut from a government conspiracy and UFOs to natural deaths and scavengers. Today, the circumstances at Silvies Valley Ranch point to humans as the probable culprits because of the precise cuts on the bulls.

Anything else for now is speculation, including ideas of what might have killed a bull without leaving marks. Marshall said he wonders if the killer used poison darts.

“We think that these are very sick and dangerous individuals and they need to answer for this horrible crime,” he said.

Silvies Valley Ranch, about 40 minutes north of the county seat of Burns, has put up a $25,000 reward for information on the bull killings that leads to an arrest and conviction, and the Oregon Cattlemen’s Association has offered its own $1,000 reward.

The investigation has pulled in Oregon State Police as well as the U.S. Forest Service because the cattle were grazing on a federal allotment in the Malheur National Forest.

The ranch is owned by veterinarian Scott Campbell, who bought the enterprise in 2006. Since then, it’s expanded into tourism with a golf course and resort on site, but still maintains around 4,500 head of beef cattle, including around 100 bulls.

The five dead bulls were found on July 30 and 31, in a wooded area about 15 miles from U.S. 395, the nearest major road. They were each about a quarter mile apart, and the first two weren’t found until several days after they had been killed — but Marshall believes the last three were discovered within 24 to 48 hours of their deaths.

The delay in finding the animals is not unusual in such a remote area, where ranchers are tasked with patrolling large tracts of land, said Jerome Rosa, executive director of the Oregon Cattlemen’s Association. Harney County is Oregon’s largest county, covering more than 10,000 square miles where cattle outnumber people 14-to-1.

“These are huge, vast, steep landscapes with lots of rock and trees and brush,” Rosa said. “Ranchers may not see their cattle for long stretches of time.”

This makes the deaths at Silvies Valley Ranch particularly bizarre, he said, because the bulls were worth a lot of money alive, particularly for breeding.

Marshall estimated their value at up to $7,000 apiece and said they would have sired at least 100 calves each over the remainder of their lives.

“Their productive life was a huge economic opportunity for the ranch, and now that’s completely lost,” he said. “We’re talking hundreds of thousands of dollars.” 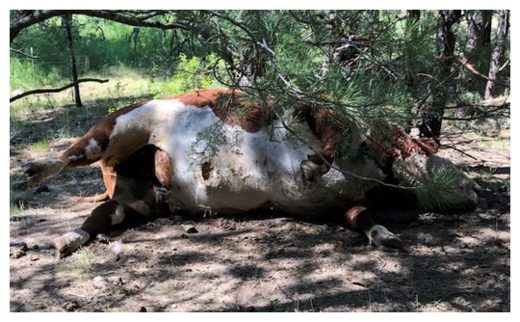 © Silvies Valley Ranch
The five dead bulls were found on July 30 and 31, in a wooded area about 15 miles from U.S. 395, the nearest major road. Their genitals and tongues had been cleanly removed.

Marshall has heard from several other Oregon ranchers who reported similar killings on their property over the past few decades — including cows that had been found with their udders, vulvas and tongues removed.

One of these ranchers, Terry Anderson, found a dead cow on land he was renting near Pendleton in 1980. Its udder had been cleanly removed and Anderson could see no clear evidence of what had killed the animal.

“There was no visible bullet hole or anything there,” Anderson recalled this week. “It was so unusual. It just left you with an eerie feeling.”

The hundreds of cattle deaths in the 1970s — largely concentrated in the Midwest — caused a media sensation as ranchers roiled by an economic crisis blamed a government conspiracy, according to Michael Goleman, a history professor at Somerset Community College in Kentucky who researched the phenomenon.

Because the killings were scattered across different states, investigators reached no overarching conclusion on the cause of the deaths, but Goleman said some people believed the government was conducting weapons tests on the cattle.

Facing pressure from ranchers, the FBI opened an investigation in 1979 into the deaths of 15 cattle in New Mexico, ultimately concluding that there was no evidence of intentional mutilation by humans and the animals had likely died of natural causes.

Since then, scattered reports have made headlines, including the discovery of several mutilated cows in Kansas in 2016 and five cows in 1990 that had been killed and dissected on a farm in Washington. Goleman said conspiracy theorists have pinned the blame on everything from satanic cults to aliens.

But Silvies Valley Ranch isn’t placing its bets on paranormal activity, though Harney County Sheriff’s Deputy Dan Jenkins said he’s gotten a few suggestions that Sasquatch may be responsible. He’s received around 20 calls from around the western U.S. since news about the deaths started spreading.

Jenkins, the lead investigator on the case, said the lack of physical evidence at the crime sites — no footprints, no tire or ATV tracks — means authorities are relying on witnesses to call in to the tip line and report any suspicious activity they might have seen in the area.

In this case, poisoning is unlikely, given the number of bulls involved and the plants in the area, he said. Larkspur typically flowers earlier in the year, while hemlock, another deadly plant, grows only around rivers and streams — not the dry forests where the bulls were found.

Plus, the fact that all five cattle killed were bulls, Bohnert said, is statistically unlikely to occur in nature — they make up only about 4% to 6% of a herd.

That leaves human activity as the most likely cause, he said. Adding to the evidence is the surgical precision with which the genitals and tongues were removed. Scavengers would leave obvious signs of tearing with teeth, claws or beaks, he said.

Bohnert said he has heard rumors of bull testicles being considered an aphrodisiac, and both tongues and genitals can be eaten — the famous “Rocky Mountain Oysters” come to mind. But he could think of no reason why someone couldn’t just legally buy the animal parts.

Yet the human explanation comes with its own difficulties.

Taking down a 2,000-pound bull is no easy feat, and Marshall said there were no signs of a struggle — the bulls were all lying on their sides as if they had just fallen over and died.

He said he could only think that some kind of toxic dart might kill a bull from a distance. But he has no proof of it and may never find it. It’s not clear if a dart would leave a detectable imprint.

In the meantime, tissue samples taken from the carcasses are still being analyzed for toxins and no results are available yet, Marshall said. Even with the tests, the killings may remain an enigma. The bulls had been left to decompose for several days, making a toxicology screen difficult to do, he said.

Until a suspect is found, ranch employees are on high alert, particularly those who patrol vast areas alone on ATV or on horseback.

Rosa said the news had also concerned other ranchers — but that greater awareness could also lead to faster answers in the tight-knit ranching community.

“The neighbors and the folks that are in those areas know each other,” Rosa said. “And when there’s someone strange or different that’s out and about, they take notice of that, and they let each other know.”