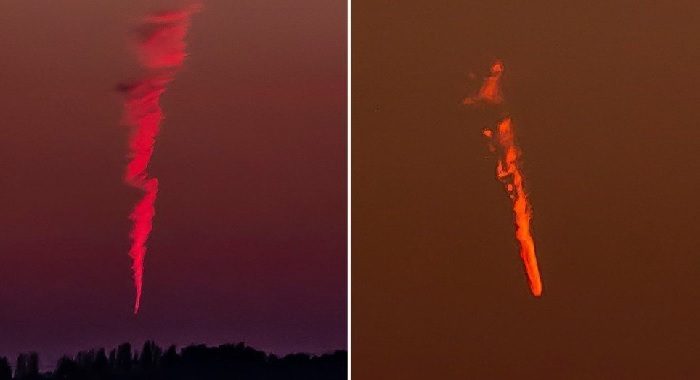 People in Cambridgeshire have been left scratching their heads over a mysterious plume of smoke that appeared over the county.

A large flaming object was spotted spiralling in the sky at around 8pm by Gerry Underwood, 55.

He was sitting outside his canal boat in Stretham, having a little fire, when he spotted the trail. He said: ‘It looked like a very thick chemtrail to start with. It looked like a short, skinny cloud. It wasn’t moving quickly at all. I’m pretty sure it wasn’t a meteorite, because they are gone in seconds.

‘We have seen hundreds of shooting stars, but this definitely wasn’t that either. This was coming down very slowly and spiralling. It started to glow orange as you can see in the pictures.

‘There were flames coming out of the back of it as well. It was really unusual.’

Gerry took several pictures of the burning entity dropping through the sky, in which a huge trail can be seen behind it as it descends into the distance.

Gerry said he was watching the unidentified object fall through the sky for ‘between 10 and 20 minutes,’ as it was coming down so slowly.

Eventually, the burning mass disappeared behind the trees in the distance.

Gerry said he was looking towards Huntingdon as he watched it descend, but stressed the object might have landed ‘well beyond that.’

He said: ‘The sheer size of it is what’s got me. When you look at the pictures, they show the trees in the foreground and it’s way beyond that, it was very big.

‘It landed beyond the horizon, that’s how big it was – we couldn’t see it land.’

Gerry said: ‘We see a lot of strange things down the river, but that’s the first time we’ve ever seen something like that.’