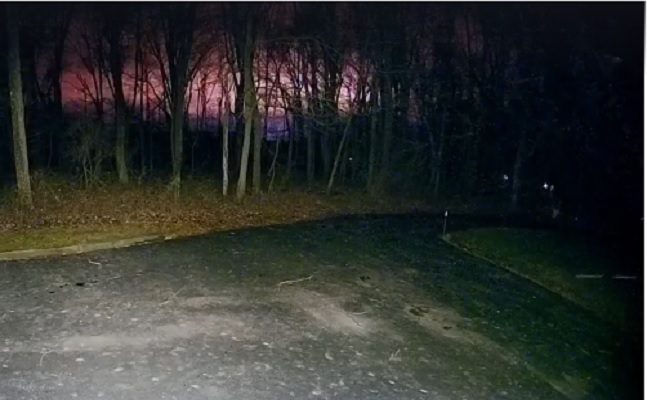 Mystery Flashes, Vibrations and ‘Humming’ in Ohio Spark Talks of Aliens and UFOs

A strange series of color flashes that turned the night sky reddish in Bethel, Ohio, has gotten international attention, as people scramble for a good explanation.

So far, nobody seems to have one, even after a week of debate.

A doorbell video, posted on Facebook by Tim Walker, shows a series of rapid flashes that changed in color and size over 20 seconds, from white to a red that filled the horizon.

It was recorded Jan. 12, just before 7 p.m., as Walker was rolling a trash bin outside his home about 30 miles southeast of Cincinnati.

“Anybody else see this tonight?” he wrote on Facebook. “The sky was flashing pink and purple – super bright. Thought it might be lightning, but it’s fairly cold (40 degrees), and there was no thunder. …It was crazy — super bright.”

It’s been a week and Walker told McClatchy News Monday that “we have not gotten any explanation yet on what this was.”

He says he and his daughter, Carolyn, were frightened by the flashes, which looked “like something you would see in the military,” Fox News 19 reported.

“I was scared,” Carolyn Walker told the TV station. “I thought it was an explosion when I first saw it, so it made me really nervous.”

Commenters on Walker’s video have also shared concerns, with Kendra Fox pointing out: “This is how every alien world domination movie starts!!”

Walker wasn’t the only one to see it, April Pierce said on Facebook.

“So many people are posting about it in Bethel and Amelia,” she wrote. “Some people said their power even flickered on and off.”

Walker didn’t report hearing an explosion of any kind accompanying the flashes, but Kat Carmosino said she heard a noise that added to the unnerving experience.

“We were in between Amelia and New Richmond, when the power went out there was the light show. The floor was vibrating and there was a humming noise. It was really odd,” she wrote.

The phenomenon has been covered by news outlets in Europe such as The Daily Mail, which said “there has been no logical explanation.”

While a UFO and aliens have come up as ideas, more down-to-earth speculation has included fireworks, a meteor and a transformer explosion. And the UK Express had a headline that asked: “Mystery US Military test exposed?”

Duke Energy told Fox19 that “584 customers lost power for two minutes just before 7 p.m. Sunday,” but a crew sent to inspect the line “found no issues.”