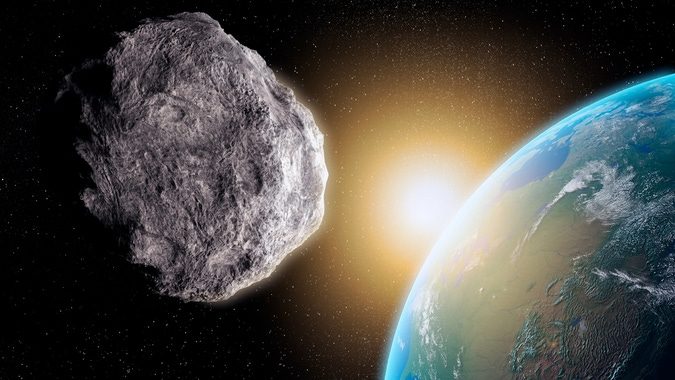 NASA have warned huge asteroids could be heading for Earth totally undetected due to a blind spot in the sky.

Astronomers funded by the US space agency have found objects heading towards us at nighttime from the east can appear stationary because of the way our planet rotates and orbits the sun.

It means they can bypass the extensive network of computerised telescopes and “sneak up” on Earth without warning, according to The Telegraph.

The telescopes algorithm has been created to be on alert for asteroids and so flags up moving objects, to avoid false alarms when supernovas and flare stars pass.

They are programmed to consider that objects heading towards Earth seem to drift west in the sky due to the planet’s eastward spin on its axis.

But when asteroids approach from the eastern sky, Earth’s spin and curved orbit around the sun can make the objects appear stationary.

The chilling revelation, published in the journal Icarus, explained that 50 per cent of impactors heading to Earth from the east are thought to experience periods of slow motion, making them hard to detect.

The team wrote: “Surveys should take extra care when surveying the sky in this direction, and aggressively follow up new slow-moving objects.”

But despite the alarming revelation, Professor Richard Wainscoat, who led the research team at the University of Hawaii, said people “shouldn’t lose sleep” over the prospects of being caught off guard by an asteroid.

He explained: “In the event that we find something that is going to hit the earth we would like to do something about it.

“It’s not a matter of finding them and sitting there and letting it hit.”

The research eerily echoes the storyline of the starstudded Netflix film Don’t Look Up, which sees Leonardo DiCaprio and Jennifer Lawrence spot a devastating comet in the skies set to wipe out the planet.

But Professor Wainscoat assured it should be possible to update the algorithms to overcome the seemingly stationary effect.

After being spotted just 24 hours earlier, it sparked concerns across the astronomical community and led to a revamp of guidelines for asteroid observers.

NASA were then tasked with identifying 90 per cent of asteroids that are bigger than 140 metres and could wipe out a large city if it landed by the US Congress.

In the event that we find something that is going to hit the earth we would like to do something about it. – Professor Richard Wainscoat

They are also working on methods to prevent Earth impacts.

A heavy spaceship program was also launched last year to smash into the moonlet of a comet to knock it off course.

Around 40 per cent of large asteroids that are closely approaching Earth have been catalogued, Professor Wainscoat said.

He continued: “We’ve got a way to go. Once we have catalogued more than 90%, the number that can creep up on us from this direction will be small.”

An earlier NASA report had warned that at least five asteroids are approaching Earth this month – with one the size of a large building.

Researches at the the Jet Propulsion Laboratory discovered the extraterrestrial objects through its Asteroid Watch dashboard, which detects and tracks asteroids and comets that are expected to come in close proximity with Earth.

But all of the forecasted asteroids this year will pass by Earth by a significant distance and is very unlikely they will hit our planet.

There is no known threat of an asteroid colliding with Earth in the next century.

The most hazardous asteroid in the solar system has been named Bennu and there is a one in 1,750 chance of it striking Earth in the next 200 years.