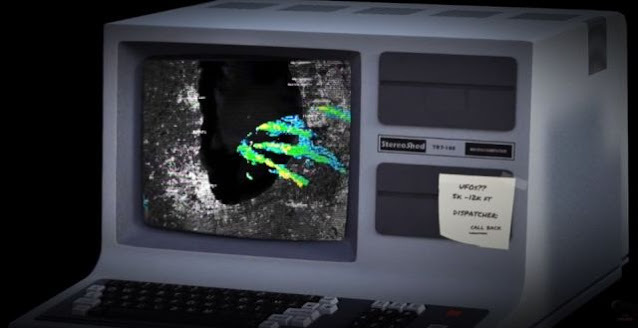 National Weather Service Lake Michigan UFO Tapes: ‘My God, What Is This?’

On March 8th, 1994, civilians in western Michigan on the edge of Lake Michigan called 911 en masse about strange lights in the sky, described as mostly cylindrical, moving up and down in altitude, and having a vertical row of lights on them. They appeared to be coordinated, as one caller described them as moving in a circle.

This was backed up by a National Weather Service radar operator in Muskegon, MI, who was contacted by the 911 dispatcher and asked to look into it. In the tapes in this episode, which are in the public domain, you can hear the NWS official remark at the anomalous and possibly coordinated behavior of the objects, which he reported moved together in a triangle.

He states they were not storms or aircraft, and as time passes, he becomes gradually more distressed, as highlighted by the subtitle overlay.

Interestingly, Project Blue Book had several interesting cases in this area of Michigan, including several that civilians described as “metallic,” but USAF officials deemed them astronomical in nature or insufficient data for analysis.

Is there an anomalous cluster in this area? And can it be predicted? We’re still working on this, as we need to cover MI data with other lakes. We’re building a free tool called Sighting, which will help anyone make new conclusions about UAP flaps and all high strangeness encounters. Beta will be shared soon.