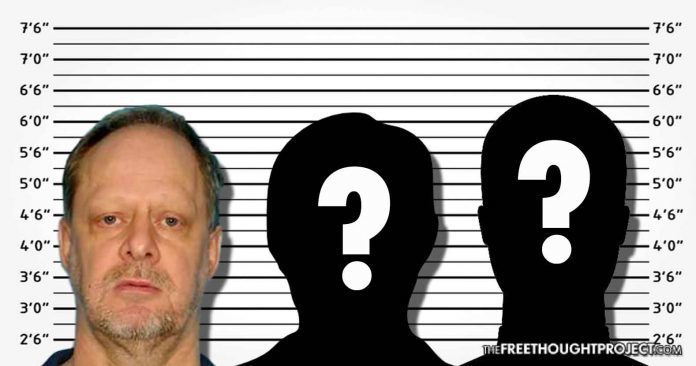 Dozens of new photos were just released from the Vegas shooting investigation which provide a chilling look inside the room and vehicle of Stephen Paddock.

The Las Vegas Metropolitan Police Department finally released a substantial amount of information this week in the form of 28 crime scene photographs. The photos show the alleged shooter’s room, vehicle, security setup, and even the infamous note. While these photos give us more insight into the shooting, they also leave us with many more questions.

The first photos in the series are not too damning, but they do show the extensive preparations taken by the shooter to prevent entry into the room.

The images also show how Stephen Paddox allegedly set up cameras to see if anyone was coming.

How nobody noticed several wires running from a door onto a food service cart, attached to multiple webcams remains a mystery.

When we look at the photos inside the room, this is when the serious questions begin to come up.

There are literally weapons scattered across the entire suite. AR-15 style rifles lay strewn across the floor, on tables, in the hall, on chairs-everywhere.

Adding even more mystery to the case is the random photo of a snorkel mouthpiece which was taped to a longer hose. Perhaps the shooter was preparing for tear gas canisters to be fired into the room. However, we don’t know because police did not release any photos showing where the hose ends. Why is that?

Police finally released a close-up photo of “the note” which was seen in the original leaked images. Why, exactly, police couldn’t confirm what was on the note originally remains a mystery.

Below are photos of the door police smashed in with a battering ram-more than an hour after Paddock allegedly opened fire in the hallway. As TFTP previously reported, because Paddock was a high-roller, the hotel used a special backline to police to warn them about the shooting. It was this backline which was blamed for the slow response by police as they were trying to help the casino keep the incident under wraps.

ENTRY DOOR 32-135 LVMPD A PORTION OF THE DOOR LVMPD

Other images show the massive amount of tools and other very suspicious items in Paddock’s room. The reason these images are so suspect is due to the fact that hotel staff admitted to interacting with Paddock-including going into his room-and said they saw nothing suspicious.

How, exactly Paddock managed to conceal the small arsenal of weapons from housekeeping is just as big of a mystery as to how he got them in the room in the first place without being noticed.

Other than the hotel room, police also released images of Paddock’s minivan. The contents of the minivan raise even more questions.

Paddock had dozens of cylinders of Tannerite. Tannerite is a legal explosive used by gun enthusiasts as a means of reporting a direct hit. Why Paddock had so much of it makes very little sense as Tannerite cannot be set off remotely with an electrical current or fire, or anything other than a bullet. If Paddock was going to set those orange canisters around the concert and shoot them to incite terror, he would have had one difficult time trying to hit them from such a distance.

An email exchange from [email protected], a Microsoft account FBI agents claimed was used by Paddock, was included in an affidavit reported by NPR. The date was July 6, 2017-about three months before the shooting-and while the FBI noted that it is unclear who is behind [email protected], the email account Paddock was contacting, the information included is significant.

In the first message, Paddock claimed that the recipient would have the opportunity to try out the weapons before they purchased them. He then wrote “We have huge selection,” indicating that he was not working alone, and he said he was located “in the Las Vegas area.”

Police also released images of the fuel tank which they claim Paddock may have tried to blow up by shooting it. The images show that the tank was indeed hit with two rounds in randome places.

A chilling image of Paddock’s vantage point was also released.

While these photos are certainly a step forward in finding out what really happened in Vegas, they are not enough. As TFTP reported this week, police have just contradicted themselves once more and reported that there are multiple suspects in the case. However, they gave out no more information.