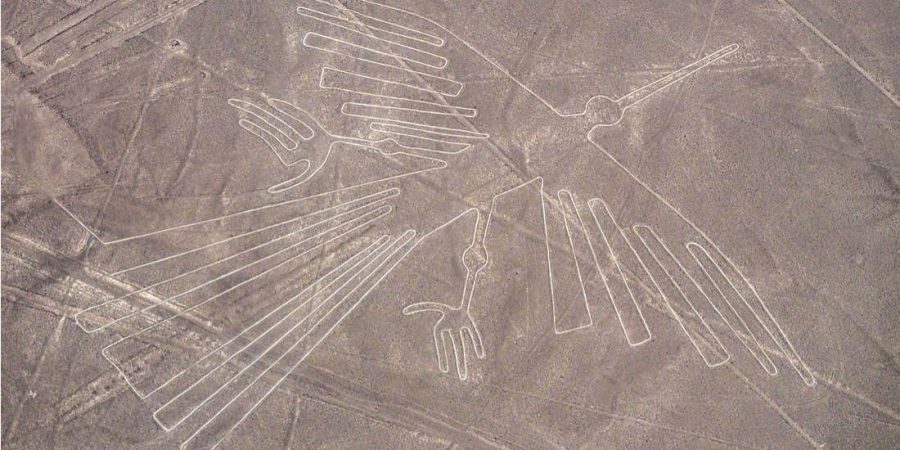 After you read this article you might also like to check out an original article from our archives: How Were the Mysterious Ancient Nazca Lines Created?

The Peruvian culture ministry has announced the discovery of more than 25 pre-Columbian geoglyphs carved into the rocky coastal desert hills of the Palpa Valley.

According to Reuters, the enigmatic ancient designs are believed to have been created by the Paracas culture approximately 2,000 years ago, meaning they had already been imprinted into the landscape for several hundred years by the time that the succeeding culture, the Nazca, created their eponymous lines nearby. Due to the staggering vastness of the high-elevation, barren Sechura Desert that Palpa and Nazca fall within, these immense geoglyphs (some are 70 meters/230 feet long) had remained unknown until ministry teams began deploying aerial drone surveys late last year.

One stunning example appears to depict a woman dancing with a killer whale – an animal that appears to have had an important role in the indigenous groups’ mythologies. Per UNESCO, which designates the area containing the Nazca Lines as a World Heritage Site of outstanding universal value, human figures are rare among the currently described geoglyphs.

“After these anthropomorphic geoglyphs we have other figures in other areas, here adjacent to Palpa where there are also zoomorphic figures of felines, snakes, birds, and also mythical figures,” Johny Isla, the ministry’s lead conservation archaeologist for the area, told the news outlet. 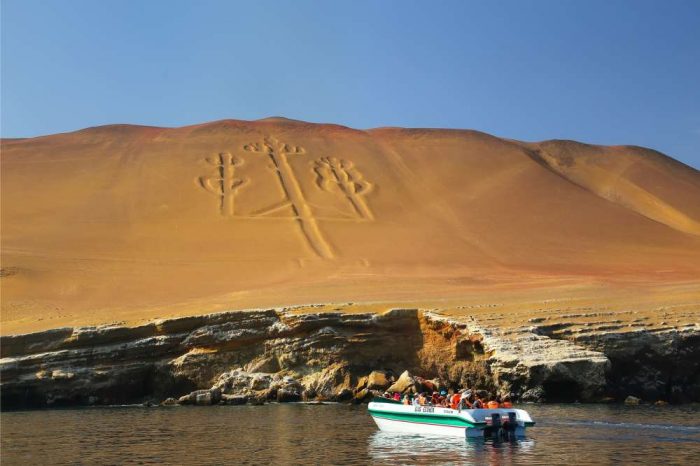 The 150-meter (492-foot) high and 50-meter (164-foot) wide Paracas Candelabra geoglyph is viewed by tourists from the waters of the Paracas Bay. The mysterious symbol, large enough to be spotted from 19 kilometers (12 miles) out at sea, is estimated to have been created by the Paracas people around 200 BC.

Isla also noted that the ongoing drone project has mapped an additional 25 geoglyphs that were familiar to locals. Contrary to popular belief, both the Nazca Lines and Paracas geoglyphs can be seen, at least in parts, from surrounding hilltops, and were thus most likely created by the cultures as social and/or religious landmarks and not by or for alien visitors.

“We still haven’t walked among them, we’ve only taken pictures. This is the first stage of research,” Isla said.

Past work has indicated that societies based in the region produced the wealth of geoglyphs during a 1,000-year period between 500 BC and 500 AD. The designs are drawn into the earth by digging ditches and hollows into the topsoil. Older images that have been attributed to the Paracas (like the one below) also feature ridges and piles of stacked dirt and rocks.

“In total we’re talking about 1,200 years in which geoglyphs were produced” in the region, said Isla.

Thanks to the extreme aridity and lack of wind, these impressively precise arrangements have stayed put over the centuries.

Showing a similar longevity, modern academics are still unable to determine why the Paracas and Nazca groups put in the considerable planning and physical effort required to construct them, despite many years of intensive study, as neither culture left a written record.