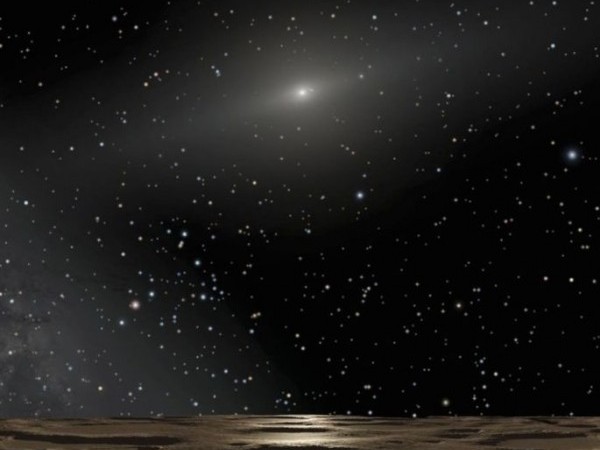 More than 100 times farther from the sun than Earth, this object has been designated V774104. It’s fueling speculation about a Planet X.

Earlier this month, astronomers announced a newly discovered object that is currently the most distant in our solar system. It’s more distant than Eris, Sedna, and 2012 VP113, all former record-holders. The object has been designated V774104, and it lies more than 100 times farther from the sun than Earth. It turned up in our sky – in the direction of the constellation Pisces the Fish – in images taken October 13, 2015 with Japan’s 8-meter Subaru Telescope on Mauna Kea in Hawaii. Astronomers announced it at the yearly meeting of the Division of Planetary Sciences of the American Astronomical Society, held November 8-13, 2015 in Washington D.C.

Astronomers Scott Sheppard (Carnegie Institution for Science), Chad Trujillo (Gemini Observatory) and David Tholen (University of Hawaii) found V774104. They and other astronomers don’t know much about it, other than its present distance and its size. That distance is 103 astronomical units; 1 AU is one Earth-sun distance. That translates to 9.6 billion miles (15.4 billion km).

These astronomers used the object’s brightness to estimate its size. They think it may be about 300 miles (500 km) across, but it also might be up to about twice as large. For comparison, the object Ceres – largest body in the asteroid belt between Mars and Jupiter – is about 600 miles (950 km) across.

What scientists don’t know – and what they want to find out – is the exact orbit of the object. The astronomers will be trying for a follow-up observation soon, but it might take some time – certainly months, maybe a year – before they can pin down its orbit with certainty.

In the meantime, the object is adding to astronomers’ struggle to understand how these distant, fairly substantially sized objects like V774104 came to be located so far from the sun. It’s also adding to the long-controversial, hypothetical case for a planet larger than Earth – a Planet X – at the outer boundaries of our solar system.

Beyond the planet Neptune, there’s the Kuiper Belt. It’s a disk – similar to the asteroid belt between Mars and Jupiter, but 20 times as wide and containing up to 200 times as much mass. It’s thought to extend from about Neptune’s orbit (at 30 AU) to approximately 50 AU from the sun, and it’s thought to contain icy comets and asteroids.

Some objects in the scattered disk may extend into the inner Oort Cloud. Astronomers don’t really understand how these objects came to be in this part of the solar system. Sedna, 2012 VP113 and the newly discovered V774104 may be part of what astronomers have recently begun calling the inner Oort Cloud. The actual Oort Cloud – where long-comets come from – is believed to be an icy shell around our solar system that begins about 2,000 to 5,000 astronomical units from the sun; by comparison, Earth is at 1 A.U. and V774104 is at 103 A.U. Some of inner Oort Cloud objects appear to have very oblong orbits, too, but they go farther out and probably weren’t sent outward by interactions with the gas giant planets. Sedna, for example, is now at about its closest to the sun, 86 AU, but astronomers have determined that its orbit will ultimately take it as far out as 937 AU. V774104 may also turn out to have a very oblong orbit, like Sedna, or its orbit may be more circular.

Within or beyond the inner Oort Cloud … a Planet X? At an article at Space.com in 2014, prior to V774104’s discovery, senior writer Mike Wall said:

Astronomers don’t know much about the origin or evolutionary history of Sedna and 2012 VP113 at this point. The objects may have formed closer to the sun, for example, before getting pushed out by gravitational interactions with other stars — perhaps ‘sister stars’ from the sun’s birth cluster, researchers said. Or inner Oort Cloud objects may be alien bodies that the sun plucked from another solar system during a stellar close encounter.

It’s also possible that 2012 VP113 and its neighbors were knocked from the Kuiper Belt to the inner Oort Cloud when a big planet was booted outward long ago. This planet may have been ejected from the solar system entirely, or it may still be there in the extreme outer reaches, waiting to be discovered.

… certain characteristics of the orbits of Sedna, 2012 VP113 and several of the most distant Kuiper Belt objects are consistent with the continued presence of a big and extremely faraway ‘perturber,’ researchers said.

It’s possible that a planet roughly 10 times more massive than Earth located hundreds of AU from the sun is shepherding these bodies into their current orbits.

This is all very speculative at this point, but the newly discovered V774104 is adding to the speculation. The fact is that astronomers just don’t know much about this very distant realm of the solar system. They’ll be trying to sort out Kuiper Belt, scattered disk and inner Oort Cloud objects in the years ahead.

As for a possible large, unknown Planet X … it’s good to remember that astronomers give the name Planet X to any unknown planet. Percival Lowell famously searched for a Planet X in the early part of the 20th century. Clyde Tombaugh had taken up his search at the Lowell Observatory in Flagstaff, when he found Pluto in 1930. In the popular culture, the name Planet X is also associated with a hypothetical object called Nibiru, which doomsayers insist will collide with or closely pass by Earth sometime “soon.” A Nibiru on a collision-course with Earth is not supported by any scientific evidence; astronomers aren’t talking about Nibiru when they speak of a Planet X.

And so V774104 joins the ranks of interesting outer solar system objects! Bottom line: Astronomers Scott Sheppard (Carnegie Institution for Science), Chad Trujillo (Gemini Observatory) and David Tholen (University of Hawaii) have found another object on the outer fringes of our solar system. It’s been designated V774104, and it lies more than 100 times farther from the sun than Earth. It’s fueling speculation about a Planet X.