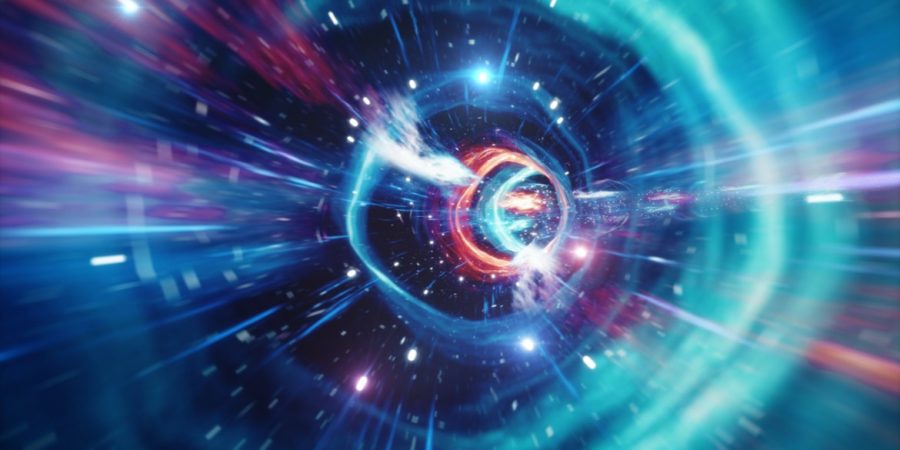 “The simplest way to construct a wormhole is to “extend” the idea of a black hole with its mirror image, the white hole.”

by Paul Sutter
via Live Science
Headline Image Caption/Credit: An artist’s impression of the inside of a wormhole. (Image credit: Shutterstock)

Wormholes, or portals between black holes, may be stable after all, a wild new theory suggests.

The findings contradict earlier predictions that these hypothetical shortcuts through space-time would instantly collapse.

The sea change comes because tiny differences in the mathematics of relativity, which is used to describe such wormholes, end up dramatically changing our overall picture of how they behave.

A game of metrics

First, some background on how general relativity operates. Relativity is like a machine. Put in certain objects — say, a mass or an arrangement of particles — and the machine spits out how that collection will behave over time due to gravity. Everything in general relativity is based on movement in space and time: Objects start at certain physical coordinates, they move around, and they end up at other coordinates.

While the rules of general relativity are fixed, the theory itself provides a lot of freedom to describe those coordinates mathematically. Physicists call these different descriptions “metrics.” Think of the metric as different ways to describe g how to get to your grandma’s house for Thanksgiving. That may be street directions, satellite-based latitude and longitude, or landmarks scribbled on a napkin. Your metric is different in each case, but no matter which metric you choose, you end up at the big feast.

Similarly, physicists can use different metrics to describe the same situation, and sometimes one metric is more helpful than another — akin to starting off with the street directions, but switching over to the napkin to double-check if you’re at the right landmark.

And by “misbehaves,” we mean that metric completely breaks down, and it can no longer distinguish between different points in space and time. But there’s another metric, called the Eddington-Finkelstein metric, that does describe what happens to particles when they reach the event horizon: They pass right through and fall into the black hole, never to be seen again. What does all this have to do with wormholes? The simplest way to construct a wormhole is to “extend” the idea of a black hole with its mirror image, the white hole. This idea was first proposed by Albert Einstein and Nathan Rosen, hence the reason wormholes are sometimes called “Einstein-Rosen bridges.” While black holes never let anything out, white holes never let anything in. To make a wormhole, you just take a black hole and a white hole and join their singularities (the points of infinite densities in their centers). This creates a tunnel through space-time.

The result? A highly misbehaving tunnel.

Once a theoretical wormhole exists, it’s perfectly reasonable to ask what would happen if someone actually tried to walk through it. That’s where the machinery of general relativity comes in: Given this (very interesting) situation, how do particles behave? The standard answer is that wormholes are nasty. White holes themselves are unstable (and likely don’t even exist), and the extreme forces within the wormhole force the wormhole itself to stretch out and snap like a rubber band the moment it forms. And if you try to send something down it? Well, good luck.

But Einstein and Rosen constructed their wormhole with the usual Schwarzschild metric, and most analyses of wormholes use that same metric. So physicist Pascal Koiran at Ecole Normale Supérieure de Lyon in France tried something else: using the Eddington-Finkelstein metric instead. His paper, described in October in the preprint database arXiv, is scheduled to be published in a forthcoming issue of the Journal of Modern Physics D.

Koiran found that by using the Eddington-Finkelstein metric, he could more easily trace the path of a particle through a hypothetical wormhole. He found that the particle can cross the event horizon, enter the wormhole tunnel and escape through the other side, all in a finite amount of time. The Eddington-Finkelstein metric didn’t misbehave at any point in that trajectory.

Does this mean that Einstein-Rosen bridges are stable? Not quite. General relativity only tells us about the behavior of gravity, and not the other forces of nature. Thermodynamics, which is the theory of how heat and energy act, for example, tells us that white holes are unstable. And if physicists tried to manufacture a black hole-white hole combination in the real universe using real materials, other math suggests the energy densities would break everything apart.

However, Koiran’s result is still interesting because it points out that wormholes aren’t quite as catastrophic as they first appeared, and that there may be stable paths through wormhole tunnels, perfectly allowed by general relativity.

If only they could get us to grandma’s faster.

Paul M. Sutter is a research professor in astrophysics at the Institute for Advanced Computational Science at Stony Brook University and the Flatiron Institute in New York City. He is also the host of several shows, such as How the Universe Works on Science Channel, Space Out on Discovery, and his hit Ask a Spaceman podcast. He is the author of two books, Your Place in the Universe and How to Die in Space, as well as a regular contributor to Space.com, LiveScience, and more. Paul received his PhD in Physics from the University of Illinois at Urbana-Champaign in 2011, and spent three years at the Paris Institute of Astrophysics, followed by a research fellowship in Trieste, Italy,