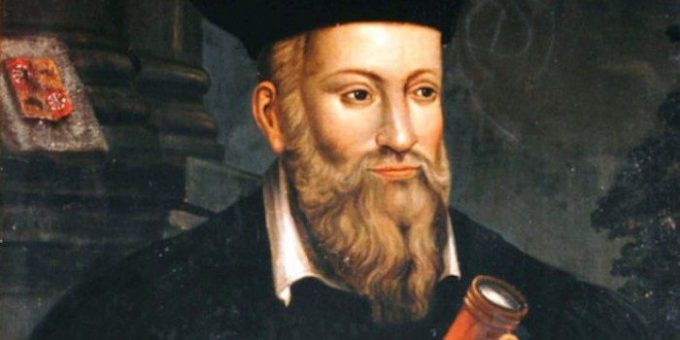 Nostradamus is famous for predicting major world events centuries before they took place, with scholars claiming he predicted Napoleon, Hilter, the JFK assassination and the 9/11 attacks among his prophecies – but did he also predict ISIS, the Zika virus, and a Bernie Sanders presidency?

A newspaper cutting featuring a Nostradamus prediction foreseeing a “Muslim army” marching through Europe went viral in the wake of the Paris atrocities.

It reports on how the French seer predicts the “army” takes power in London after leaving a trail of murder, rape and pillage.

It was first featured in the New Prophecies of Nostradamus 1995-2025.

Website Nostradamus 2242 claims World War III will begin this year as the struggle with ISIS escalates and would end in 2242 – 26 years from now.

It says Nostradamus had been translated as saying: “He will enter wicked, unpleasant, infamous, tyrannizing over Mesopotamia.

All friends made by the adulterous lady, land dreadful and black of aspect.”

The website says: “An amazing quatrain about Iraq’s ordeal and tyranny in the ongoing sectarian violence, particularly on the aftermath of the 2003 US invasion, the surging of Al-qaeda leading to the organisation of ISIS.

“ISIS’ target is Mesopotamia, present day Iraq. ISIS is also the most wealthy terrorist organization in the world, thanks to its numerous contributors.”

A new wave of Nostradamus researchers are claiming the 16th century French prophet also predicted the Zika virus, with previously puzzling quatrains about ‘flying insects‘ and ‘tiny infant heads‘ now being understood to refer to the virus causing havoc in parts of South America.

However it’s not all doom and gloom, with some scholars claiming Nostradamus also predicted a Bernie Sanders presidency.

They say Nostradamus has been translated as saying: “The free land of Liberty made corrupt, ‘twixt criminal and despot he emerged, the progressive King made to them not so arrogant, from loss will have late victory.“

Researchers claim the ‘criminal‘ may refer to Hillary Clinton and the ‘despot’ to Donald Trump – meaning the ‘progressive King‘ may refer to a future President Sanders.

The good news for Americans is that Nostradamus predicts that the land’s “renown, praise, reign, and power will grow” under President Sanders.