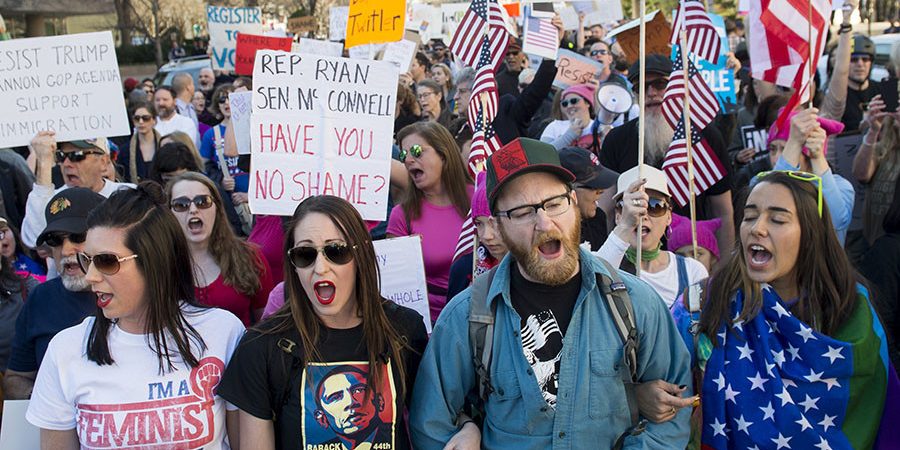 ‘Not my President’s Day’ Anti-Trump Protests Across America

Activists opposed to President Donald Trump gathered across the US for protests dubbed “Not my President’s Day” on a federal holiday commemorating the birthday of George Washington.

Monday protests were scheduled to happen in 29 cities, including New York, Chicago and Los Angeles.

Opposition of President Trump and his administration’s policies has centered on women’s reproductive rights, immigration and climate change.

“A lot of people are angry because he lost the popular vote and is ruling like somebody who won by a landslide,” Ogla Lexell, who along with 20 others helped organize the rallies in Los Angeles, New York and Chicago, told CNN.

She said the rallies are intended to “keep the momentum” between the massive attendance at the Women’s March last month and the upcoming Tax Day March on April 15.

Portland
About 300 people turned up for the anti-Trump rally in Portland, but police clashed with the group early on as protesters blocked the street.

Portland Police Bureau said the traffic blockage was not permitted and anyone who failed to return to the sidewalk would be arrested.

Another Portland event began at Director Park at noon, and police said organizers did have a permit for street closure.

Over one thousand people are protesting outside Trump Tower in Chicago | #NotMyPresidentsday pic.twitter.com/KMzCUJGCUM

Philadelphia
Among the demonstrations in the city of brotherly love, a rally at Thomas Paine Plaza turned into a march to Independence Mall and back.

First Amendment is alive and well in the City of Brotherly Love and Sisterly Affection. This IS what democracy looks like! #NotMyPresident pic.twitter.com/F4dZm9y7LO

Thousands march on the White House on #PresidentsDay! Donald Trump does NOT represent our values #NotMyPresidentsDay #resist pic.twitter.com/lbPGHbLBg9

In Washington, DC, people chanted “This is what Democracy looks like!” while another group chanted “They attack one of us; they attack all of us.”

New York
Thousands made it to Columbus Circle, near the Trump International Hotel and Tower, and the crowd reportedly wrapped around 13 blocks before police dispersed them.

At the #NotMyPresident rally, the chant: "Love! Not hate! Makes America great!" pic.twitter.com/i0cQKngW9G

“While we acknowledge that Donald Trump holds the current title, the policies he’s trying to put in place are not the beliefs shared by the majority of the people,” Nova Calise, a television producer and one of the organizers of New York event told KGW. “We do not accept Donald Trump as our president because he does not represent us.”

Among the chants heard in the LA protest was, “No ban, no wall, sanctuary for all!”

Atlanta
“No ban, no wall!” was also a popular chant in Atlanta, Georgia, where protesters gathered in front of City Hall.

It's okay if you don't bring a sign. Just bring your tuba. 😄 ❤️ it #NOTMYPRESIDENTSDAY #TheResistance pic.twitter.com/3XmUlmMxeM

Supporters from around the world joined in staging their own rallies. Thousands rallied in London, while two dozen protesters met in the Orkney Islands to send postcards to President Trump.

Hundreds of thousands of anti-Trump protesters rally outside Parliament during debate on official visit https://t.co/7VxsUOAsEw pic.twitter.com/VnEy777hLu