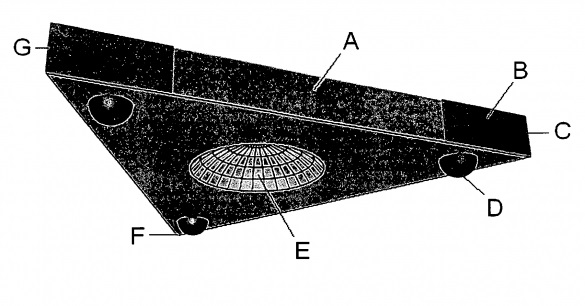 If you’re one of the hundreds, if not thousands, of people who have seen a triangular UFO over the past two decades or so, now you can see what its original design diagrams look like, courtesy of a viewer (Darian Calhoun) of the Talk is Cheap video podcast and Corey Goode, an unusual fellow who tweeted a link to the podcast and his followers took care of spreading it on the Internet. Where did the diagrams come from? The original patent US 20060145019 A1 for a triangular spacecraft that became the TR-3B!

A spacecraft having a triangular hull with vertical electrostatic line charges on each corner that produce a horizontal electric field parallel to the sides of the hull. This field, interacting with a plane wave emitted by antennas on the side of the hull, generates a force per volume combining both lift and propulsion. 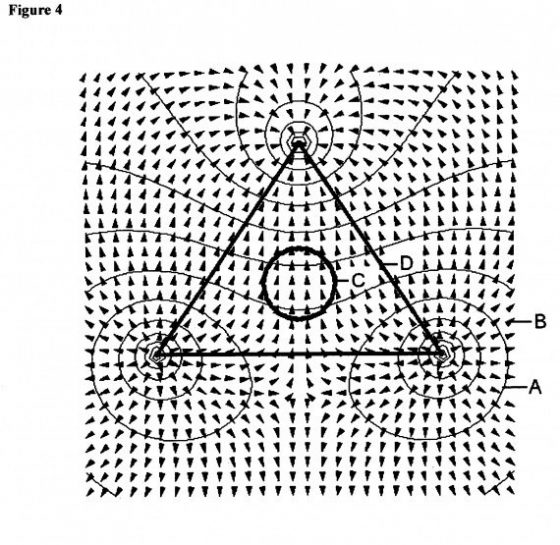 Does that sound like what you saw? The patent, filed on December 20, 2004, by inventor John St. Clair, gets mathematical fairly quickly, but the drawings and abstract make it clear that this is an entirely new spacecraft with a futuristic propulsion system.

This invention relates to a spacecraft propulsion system utilizing a rotating octagon of trapezoidal electrically charged flat panels to create an electric dipole moment that generates lift on the hull. On the interior side of each panel are electrostatically charged rods which produce a planar electric field that emerges from holes in the panel to form an ellipsoidal potential energy bubble on the outside of the hull. The rotating hull dipole moment generates a magnetic moment which, together with the magnetic field gradient developed by the rotating electric field of the electrostatically charged panels, produces said lift force. The potential energy field is enhanced by using a double cladding of hull material with different ranges of permittivities.

Throw in some comments like “This combination of fields produces a spacetime curvature as determined by Einstein’s General Theory of Relativity” and it’s no wonder the military keeps it so well hidden … except for this patent that’s been hiding in plain sight. It’s not clear how “Darian Calhoun” stumbled upon it, but kudos to Talk is Cheap for bringing it out into the open where Corey Goode picked it up. 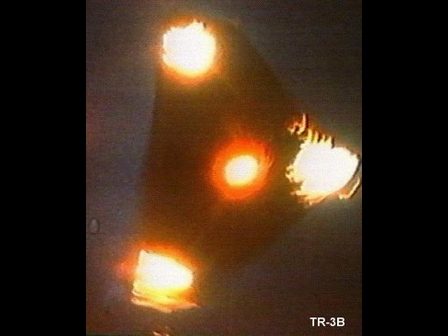 For those not familiar with him, his Sphere Being Alliance biography describes Corey Goode as “an intuitive empath” (IE) who was recruited at age 6 for a MILAB program (indoctrination for black ops program) where he eventually supported a “rotating Earth Delegate Seat (shared by secret earth government groups) in a “human-type” ET SuperFederation Council.”
He claims to have worked in a “Secret Space Program” interfacing with “non-terrestrial beings.” Goode now works in the information technology and communications industry as well as continuing to use his IE ability to communicate with the Blue Avians (of the Sphere Being Alliance) and “interface with multiple ET Federations and Councils” to “deliver important messages to humanity.”

Like the TR-3B patent? There’s obviously more to this. Iit seems strange that the patent just “suddenly” was discovered. Will someone from the military or the government issue any comments, confirmations or disclaimers? They haven’t so far. For now, we’ll just have to wait for more from Corey Goode.