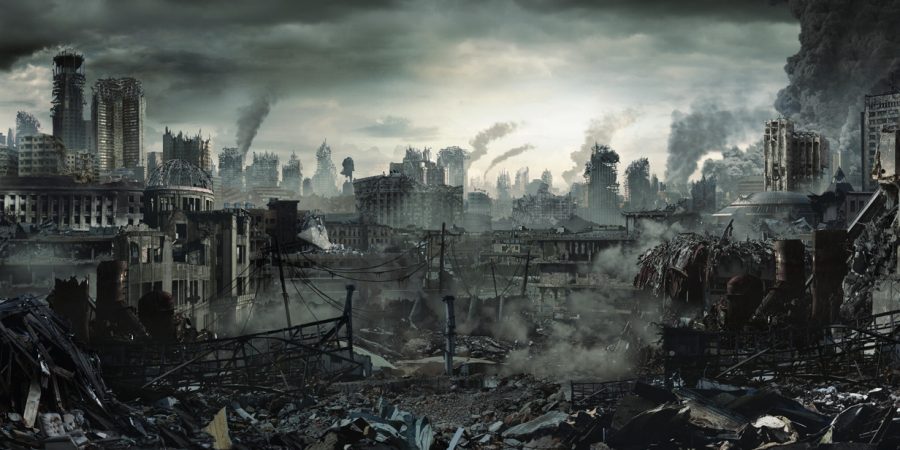 Hell best describes the future of large cities portrayed in a haunting — and rather alarming — Pentagon video obtained by the Intercept.

Titled “Megacities: Urban Future, the Emerging Complexity,” the five-minute video discusses urban warfare in the not-so-distant future, and the imagined difficulties of controlling sprawling populations in the coming utter chaos.

“Megacities are complex systems where people and structures are compressed together in ways that defy both our understanding of city planning and military doctrine,” a stern voice narrates over mildly ominous background music and images of present-day urban blight and violence. “These are the future breeding grounds, incubators, and launching pads for adversaries and hybrid threats.”

But the terrorists depicted in its footage aren’t the stereotypical religious extremists currently the putative focus of a multi-fronted U.S. military campaign — rather, the Pentagon warns, the enemy will be subversive elements arising amid dwindling resources as the stratification of wealth sharpens in the years to come.

“Growth will magnify the increasing separation between rich and poor,” the narrator portends. “Religious and ethnic tensions will be a defining element of the social landscape. Stagnation will coexist with unprecedented development, as impoverishment, slums, and shantytowns rapidly expand alongside modern highrises, technological advances, and ever-increasing levels of prosperity. This is the world of our future — yet it is one we are not effectively prepared to operate within; and it is unavoidable.”

Megacities will host 60 percent of the world’s rapidly expanding population by 2030, the video notes, and urban centers “will be the locus, where drivers of instability will converge” — instability brought by the inability of Earth to support exploding population, as in the lack of fresh water and sanitation, closer proximity of traditionally opposed ideologies, and burgeoning alternative forms of governance necessitated by such cramped living.

Despite these sharply diminishing supplies, rigged electrical grids, and “growing mass of unemployed,” the narrator exhorts, technological advances will continue unabated, furthering the stark contrast between burgeoning alternative societies and — what one must imagine — the elite element looking down on it all.

“Where physical domains can be seen, digital domains will have limitless potential to breed and expand without limit,” the narrator predicts over an image pulled from an Anonymous video. “Digital security and trade will be increasingly threatened by sophisticated illicit economies and decentralized syndicates of crime to give adversaries global reach at an unprecedented level.”

It wouldn’t be a stretch to surmise the video is taking aim at the growing number of cryptocurrencies, hackers, and — frankly — subversive agorist elements already working outside traditional governance and Big Bank-centered financial systems.

As the Intercept points out, the video seemed at first to originate from JSOU, but in actuality was produced by the Army.

“It was made for an internal military audience to illuminate the challenges of operating in megacity environments,” U.S. Army spokesperson William Layer told the Intercept by email. “The video was privately produced pro-bono in spring of 2014 based on ‘Megacities and the United States Army.’… The producer of the film wishes to remain anonymous.”

Understandable, that anonymity, given the hyperbolic — if not terrifying — portrait of the near future painted by flat narration against a backdrop of chaos and gloom.

“Even our counterinsurgency doctrine,” narration continues, “honed in the cities of Iraq and the mountains of Afghanistan, is inadequate to address the sheer scale of population in the future urban reality. We are facing environments that the masters of war never foresaw. We are facing a threat that requires us to redefine doctrine and the force in radically new and different ways.”

“Megacities are, by definition, urban areas with a population of 10 million or more, and they have been a recent source of worry and research for the U.S. military,” the Intercept notes. “A 2014 Army report, titled ‘Megacities and the United States Army,’ warned that ‘the Army is currently unprepared. Although the Army has a long history of urban fighting, it has never dealt with an environment so complex and beyond the scope of its resources.’ A separate Army study published this year bemoans the fact that the ‘U.S. Army is incapable of operating within the megacity.’”

Dystopian though the video might be, it also makes the staggering assumption the fringe elements in these megacities will inherently operate as violent, criminal elements, rather than simply thwarting governance grown too overbearing to function rationally and justly.

In this way, “Megacities” functions quite similarly to current controversial police training — furthering the Us versus Them scaremongering without foundation in reality. Of course, this would be rational in the eyes of its military producer.

“This is a fantasy, the idea that there is a special military science of megacities,” Mike Davis, author of “Planet of Slums” and “Buda’s Wagon: A Brief History of the Car Bomb,” told the Intercept. “It’s simply not the case. … They seem to envision large cities with slum peripheries governed by antagonistic gangs, militias, or guerrilla movements that you can somehow fight using special ops methods. In truth, that’s pretty far-fetched. … You only have to watch ‘Black Hawk Down’ and scale that up to the kind of problems you would have if you were in Karachi, for example. You can do special ops on a small-scale basis, but it’s absurd to imagine it being effective as any kind of strategy for control of a megacity.”

Control, it would seem, is the ultimate goal of the government’s strong-arm military — whether or not alternative subsets coexist peacefully in the shadow of their high rise-dwelling elite brethren.

“The threat is clear. Our direction remains to be defined. The future is urban.”