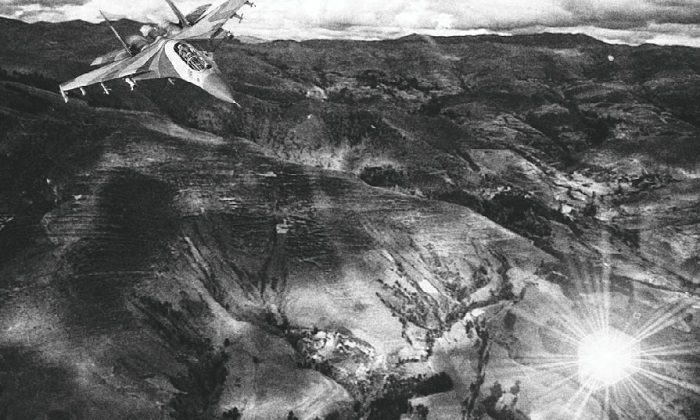 Oscar Santa María recalled his experience, which has been officially recorded by NASA.

Commander Santa María of the Peruvian Air Force (FAP) was a guest on the “Tengo Algo Que Decirte” television program and disclosed further details about his UFO experience on 11 April 1980.

The Peruvian pilot disclosed that what he experienced in the skies over the department of Arequipa was incredible, as he pursued a UFO and opened fire against it for twenty-two minutes.

“No, they didn’t attack me. They were eluding my fire. They seemed to know the range I was able to fire,” said Cmdr. Santa María during the broadcast.

He said that some time later, in 2007, he learned that the case had been officially recorded by NASA.

“They reported it. I had no idea that it had been recorded, but I learned in 2007 that the United States had a record of the case.”

It is known that the Peruvian pilot fired sixty-four rounds, but these had no effect whatsoever against the unidentified flying object. After his experience, Santa María has granted countless interviews and taken part in renowned television programs such as “UFO Hunters”, produced by The History Channel.

Cmdr. Santa María added that he saw another unidentified flying object flying high above the La Joya Base in Arequipa on December 25th, three years after his original experience.

[Translation (c) S. Corrales, IHU with thanks to Guillermo Giménez]

Inexplicata – The Journal of Hispanic Ufology

In case you have never heard about this incident or would like to know about its origins here is an article that will catch you up:

A fighter pilot in the Peruvian Air Force for 25 years, Col. Oscar Santa Maria Huerta, was no novice when he took aim at a threatening balloon-shaped object hovering above his airbase at Arequipa, Peru.

“I approached within shooting range and shot around sixty 30mm shells at the balloon” he said through a translator, “It had no effect at all.”

One of those bullets would have blown up a truck, he said, but the shots he fired did not even make a dent. The object “seemed to absorb the shots,” he said describing the UFO encounter.

Huerta was one of six representatives from Latin American countries speaking at the Congressional-style hearing on UFOs being held this week at the National Press Club.

During his testimony on May 2, he described the events as they unfolded of what would become one of the most memorable days in his life. It began at the La Joya Air Base at Arequipa, Peru around 7:15 a.m., April 11, 1980. There were around 1,800 men on the base that day and a number of Sukhoi 22 fighter jets.

The jets were put on standby for a strange ball shaped object that floated stationary in the sky around 1,800 feet above the ground and approximately 3 miles away. Huerta was sent up to take care of it.

There was sensitive military material at the base at that time and they were concerned the balloon might have been some form of espionage, Huerta explained.

The pilot said he flew straight at the object shooting as he went, but to no effect. When the object began to ascend, he followed it until around 50 miles from the base, the balloon quickly stopped, forcing Huerto to veer suddenly out of its way.

“I decided to ascend quickly and get in an attack position vertically, but I was not able to get it in my sights to fire,” he said. The jet and the craft continued in a game of cat and mouse, flying high over the surrounding area. Twice Huerta had it in lock to fire and each time the craft would move, quickly rising to become level with the jet.

Huerta kept moving up higher and higher until he got to around 63,000 ft. That was when the craft came close enough for him to see what he was dealing with. It was about 30 feet in diameter; the balloon-shaped craft had an enameled, cream-colored dome and a wide, circular silver metallic base. The surface was smooth with no apparent antennae, no wings, no exhaust and no visible means of propulsion.

The craft, he said, seemed to anticipate his every move, noting with relief, that it never retaliated.

“The total 22 minutes of maneuvers is clearly etched in my brain,” he said, “I am convinced there is extraterritorial life. I will never forget my experience.”

The unidentified craft was witnessed by everyone on the base as well, Huerta said, and the event was registered by the U.S. Defense Department. Huerta submitted a copy of the message sent from the U.S. DOD.

The weeklong Citizen Hearing on Disclosure at the National Press Club in Washington, April 29- May 3, is taking testimonies from international researchers, former members of the military, and other witnesses to extraterrestrial encounters. The aim of hearing is to pressure the U.S. government to open its files on documented encounters with extraterrestrial life and UFOs.