Seismic indicators on the surface appear to show that Earth is right on track for Week 4 of the 2016 Earth Orbit Cycle relative to the Black Star that began the first week of February.

The 2016 Week 4 total at 298 is almost identical to what we saw for the 2014 cycle with the 5-magnitude earthquake events just one quake event apart declaring the 18 events for 2015 an anomaly like the 224 value for the 2.5 to 4-magnitude earthquake events. The 273 value for these key indicator earthquake events for the current 2016 cycle is about 50 events above the yearly average that should drop lower over the coming weeks to maintain the 2014/2015 trend through the initial stages of the first earth change uptick period moving forward. My feeling today is that these 2.5 to 4-magnitude indicator quake values will remain on the high end of the scale, because of the two deep magma waves currently stalled along the northwestern and southeastern corners of the Pacific Ocean/Ring of Fire.

We see the single 7-magnitude quake event for Week 4 of the 2016 cycle with the 7.8 Indonesia Quake Event (link) precisely like we saw last year revealing the same pattern. Those following the research should realize that recent Black Star Update Reports made predictions for big quake events on May 1-2 and again on May 14-15 based upon the Moon coming around the Earth in orbit to align with the Black Star now moving through the Libra Constellation relative to the Sun. While the Earth/Moon/Black Star Alignment Earthquake Event pattern remains just a theory, a definite pattern is emerging to suggest that these alignments produce quake events a high percentage of the time during the earth change uptick periods. Now we watch for another big quake event to take place around the Ides Of March and the time I expect Open Border Lobby/Pathway/Illegal Amnesty Marco Rubio to get Trumped in my home state of Florida.

All of that being said, the seismic/volcanic/magnetic North Pole migration indicators combined are in some ways painting a disturbing picture pointing to a series of new patterns trying to develop and change everything for the Project Black Star Investigation now in the sixth year. Earth saw nine (9) new volcanic eruptions this week representing the high-water mark since the investigation started with focus on the regions around the Pacific Ocean/Ring of Fire where these two deep magma waves stalled, during the recent earth change lull period running from the end of November 2015 to the first week of February 2016. The northern region is the area between Japan/Kamchatka and the Alaska Quake Swarm Area with the southern region being the area between Peru and the southern border of Mexico. Remember again that these magma waves began circling the Pacific Ocean/Ring of Fire following the 7.8 Nepal Quake (5.25.2015) and the record-deep 7.8 Japan Quake from a month later at 677 kilometers. My prediction that these 600 kilometer-deep earthquake events would cross the Southern Pacific and into South America came true with the two 7.7 Peru quake events at our backside alignment that were five minutes apart and more than 600 kilometers deep causing disturbances in the transition zone of Earth mantle. These deep quakes cause rising/proliferating magma plumes that expand and rise up to displace heavier magma beneath Earth crust seeking pressure-relief mechanisms in regional volcanoes accounting for the regional volcanism uptick from my recent reports.

The surprise this week is that Earth saw no 6-magnitude earthquake events for the reporting period ending last Saturday and a quick look at EQuake3D shows no 6-mag quake events for Week 5 running to this Saturday seeming to break the two-year trend of five (5) events from 2014 and 2015. This lull in the large-magnitude quake events could be a warning sign that pressures are building at the same time that tectonic/volcanic pressures are shifting from the Asian/Indonesia side of the Pacific Ocean/Ring of Fire over to the Americas with focus on the Cascadia Subduction Zone that is the topic of many articles in the Featured Section of this newsletter worthy your attention. 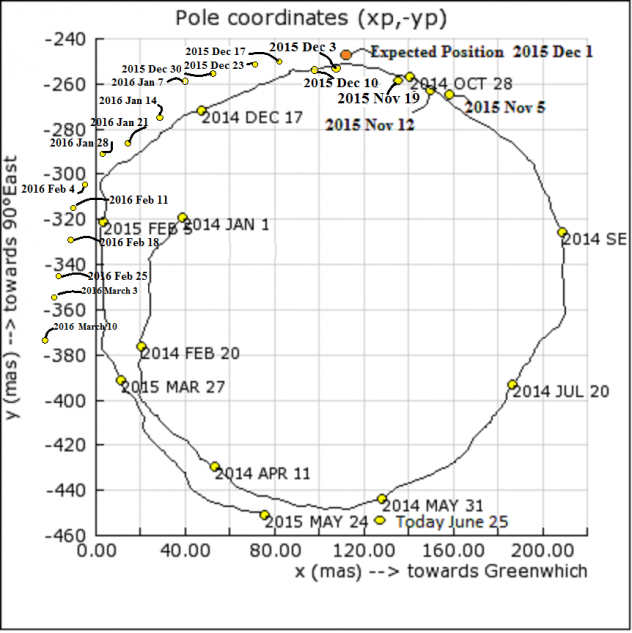 The magnetic North Pole increased velocity this week down and to the left in the chart matching the move for Week 4 for the last two orbit cycles, but the position seems ahead of schedule from what is expected from the predictive modeling. We should expect to see a move back onto the chart near the 2014 and 2015 positions in the coming weeks to remain consistent with movement over the course of the last two cycles. Remember that the leading hypothesis is that the magnetic North Pole is migrating along these series of loops, not because of shifting Earth metals, but because the Black Star represents a third powerful magnetic having an arm-wrestling contest with the Sun for Earth magnetic polarity control. We should see the same 11 to 13-day lag behind the 2015 magnetic pole position exactly like we see for quake events in the growing seismic chart, even though eventually all of the modeling will break down from near Black Star/Earth proximity. A sharp deviation in magnetic North Pole migration pattern movement could very well be the strongest indicator of all that the Black Star is closer to Earth that we realize, which is why recording this key position is important to the larger Project Black Star Investigation.

The top Featured Article for this week includes my email comments to Dr. David Morrison (SETI/NASA) defending my position as a ‘date setter,’ as I have recently come under attack from members of the recognized Planet X/Nibiru Movement like Marshall Masters, John DiNardo and others appearing directly below this Update Report. With those things in mind, key dates to watch include the middle of March for another big Moon-alignment quake event to see if the pattern holds for lunar alignments through the earth change uptick periods. Mars position in orbit relative to the Sun and Earth is very similar to what we saw for the 2012 orbit cycle making me believe the red planet will experience another Mystery Martian Dust Storm like the one starting on March 12, 2012 in combination with the Magnetopause Reversal expected around May 1, 2016. Then we should expect the coming Sun/Earth/Black Star nearside-alignment quake event along the Pacific Ocean/Ring of Fire on May 7, 2016 with Earth crossing Black Star Orbit Path on May 20, 2016. I do not expect Gill Broussard’s March 26, 2016 Planet7X/Earth Crossing Event prediction to come true, as the Black Star is much too far left in the orbit diagram for any March crossing event.

The current earth change uptick period should peak in the first week of May 2016 with three weeks of much higher-than-average quake events across the board revealing the same uptick pattern we have seen since the investigation began in 2011 with the peak coming 11 to 13 days ‘later’ with each Earth Orbit Cycle. We should expect to see Dutchsinse making YouTube video reports on rising/cresting magma levels at Kilauea (Hawaii) in the month of May from near-Black Star proximity, as the Black Star/Earth magnetic portal connection will be at the shortest length through this critical period for the entire 2016 cycle. Another consideration is the solar flare uptick that should manifest once the Sun/Earth/Black Star magnetic portal connections begin converging in the week before the nearside-alignment quake event and again once those connections cross to begin diverging after the big quake event. While I fully expect another Magnetopause Reversal Event to begin in combination with the Martian Dust Storm around May 1, 2016, NASA by now has perfected the false feed aspect of their cover-up operation to ensure this data remains hidden from the general public, according to DHS/DoD protocols/guidelines.

Project heroes for the week include Stephen, Sandra, George and Tina all supporting the Project Black Star research, by subscribing at http://terral03.com to receive full subscriber benefits. Deborah, Tony, JD, Rafael and David renewed their subscriptions from previous years and Randi made another donation to the research. Remember that all newsletter subscribers and contributors can share weekly newsletter links from the 2016 Dropbox Folder with family, friends and anyone you wish in emails, videos are even radio presentations to help others become aware of the earth changes taking place all around us in time to prepare. This is a great help to the investigation for attracting support for the research and future subscribers down the road. My feeling is that providing free links to the weekly newsletters in the YouTube description information is a great promotional tool attracting more project attention and research support, which is why these free links will remain part of the regular program moving forward. Remember that all newsletters are uploaded twice each week with the first upload coming ‘before’ the radio show each Thursday around 2PM Eastern Time. I then record the Black Star Update Report radio show live at Revolution Radio and post that link in the second upload between 5PM and 6PM to ensure all newsletter subscribers and contributors have access to the latest radio show information with each volume of Terral’s 2016 Newsletter. Thank you to everyone supporting the research and making the investigation possible.

Read the Full Report and related articles using a complimentary link to Terral’s 2016 Newsletter Volume 10. Subscribe and support the research at http://terral03.com.