Seismic chart data for the last three years has shown a well-defined earth change uptick for Week 9 and the same pattern is present for the 2016 Earth Orbit Cycle relative to the inbound Black Star now moving with decreased velocity through the Libra Constellation relative to the Sun.

Beyond Week 11, the predictive seismic modeling shows a well-defined lull for Week 12 and then a steady rise in earthquake activity across the board running from Week 13 through Week 15 with higher-than-average global earthquake activity for Week 16. The significant jump in seismic activity is caused by Black Star/Earth near proximity, as our planet is scheduled to pass between the Sun and Black Star on May 7, 2016 representing the center of the coming seismic peak period; generated by the shortening of the Black Star/Earth magnetic portal connection allowing the Black Star to inject increased amounts of solar redirected electromagnetism into our planet translated into heat energy via Earth metals and the induction process.

Earth saw six new volcanic eruption events this week with focus on Indonesia where we have seen many large-magnitude earthquake events including this 4.5-magnitude quake event (here) with an epicenter depth of almost 550 kilometers. The two notable areas with new volcanic eruption events is the region between Kamchatka and Alaska to the north and the region between Ecuador and Mexico where the two deep magma waves appear to be regaining momentum/intensity and expected to eventually converge together at the widening California Quake Swarm Area that has become the US West Coast Quake Swarm Area already spreading north to include the bulging Yellowstone Magma Chamber riddled with increased seismic activity. All eyes should remain focused on the Cascadia Subduction Zone for signs that the deep magma wave has pushed by Alaska to begin the move south to the Continental United States where the region of Seattle, Washington appears to be in the seismic cross hairs moving forward. 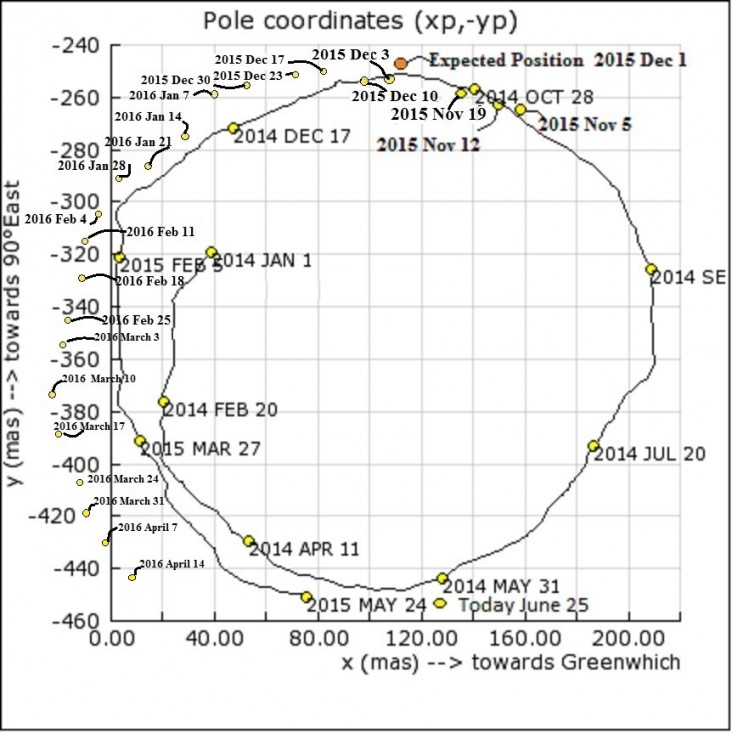 The migrating magnetic North Pole has taken a much-wider path and is covering more ground than we have seen in previous years continuing at a pace that is a week to two weeks ahead of the predicted position. Stargazer sent in a link to this story (here) saying that the magnetic North Pole has made a big turn towards the east among other statements suggesting that this big turn took place around the year 2000, which in my estimation is not supported by the evidence. 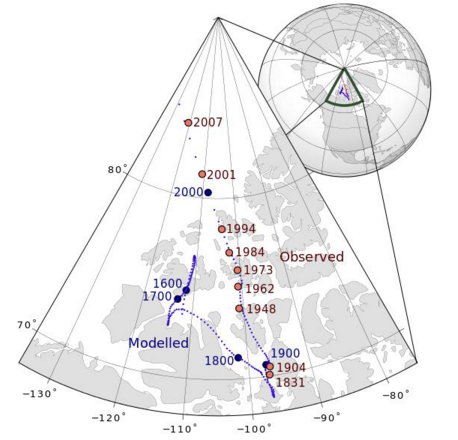 This story (here) includes a map (above) showing magnetic North Pole migration patterns going back to 1600 AD indicating that the big turn took place in the years leading up to 1831 AD and showing the magnetic North Pole migrating ‘north’ towards Siberia that continues today. If someone wants to write in and make the case for something else, then I am all ears. My view is that the magnetic North Pole is migrating towards the largest land mass (Euro/Asia), as the Sun and Black Star wrestle for Earth magnetic polarity control. I fully expect the current migration pattern to reverse itself once the Black Star leaves the inner solar system depending on Earth metal shifts around what could be multiple Black Star/magnetically-induced geological pole shifts that tips Earth over on its axis.

Project supporters for this week include Leah, Gary and Terrance who all subscribed to Terral’s 2016 Newsletter earning full subscriber benefits at http://terral03.com. James, William, Brian and Richard renewed their subscriptions from previous years with Leah also making a donation to the research. Thank you to everyone supporting the research for making the Project Black Star Investigation possible.

Read the Full Report and related articles using a complimentary link to Terral’s 2016 Newsletter Volume 15. Subscribe and support the research at http://terral03.com.