Seismic, volcanic and magnetic North Pole migration indicators all say Earth continues moving through the second and final earth change lull period for the 2016 Earth Orbit Cycle relative to the Black Star positioned in the Libra Constellation relative to the Sun.

Year-over-year weekly seismic values are within predicted/normal parameters for Week 48 of the 2016 Earth Orbit Cycle with only the 5-magnitude earthquake events being above the weekly quake event average generated by the continued deep magma plume activity around the Pacific Ocean/Ring of Fire threatening to push into the Atlantic Ocean spreading to the entire world.

The bounce in weekly 5-mag quake events was predicted last week in light of the fact that Earth saw more than 50 weekly events for Weeks 45-47 to then see a dramatic drop to just 21 events for Week 47 that is below the weekly total average providing strong evidence that a big bounce was definitely in the cards. We expect the 2.5 to 4-mag quake event values to be around 200 for the second week of February at the end of the current earth change lull period, so do not be surprised if this value bounces up in the next couple of weeks; before settling on the lowest weekly value around the middle of February 2017 to begin the next earth change uptick period running through May 2017. The high number of 7+ magnitude earthquake events moving through the lull period is connected to the deep magma plume activity with rebounding magma waves pushing around the Pacific Ocean/Ring of Fire acting as trigger mechanisms for releasing this energy being stored in many cases in the growing deep magma plume formation itself becoming a massive energy-storing reservoir allowing this energy to be released later in the timeline once the two deep magma plume waves collide along the US/Canada West Coast that could happen moving through the peak of the coming earth change uptick period in late April/early May 2017.

Earth saw six new volcanic eruptions this week with primary focus on the northern magma plume wave activity coursing back and forth between Indonesia (origination zone) and there terminal end of the northern magma plume wave now projected to be located in the region between Alaska and the US West Coast already pushing south below the Cascadia Subduction Zone described in my recent Update Report (video) posted atop the Featured Section of this newsletter. Everyone living anywhere west of the Rocky Mountain Ridge in the United States is wise to wake up and take notice of the shifting seismic/tectonic/volcanic pressures shifting from Indonesia through the Americas for devising the best survival strategy possible, because you are in the eye of the coming seismic/volcanic storm already on the horizon. The fact that we continue to see so many 7+ magnitude earthquake events and so many new volcanic eruption events each week in the Pacific Ocean/Ring of Fire represents a bad omen for the US/Canada West Coast moving through the coming earth change uptick period about which everyone has been warned repeatedly over the last two years; as these dominoes were stacked against the region more than a decade ago with many already falling like clockwork. 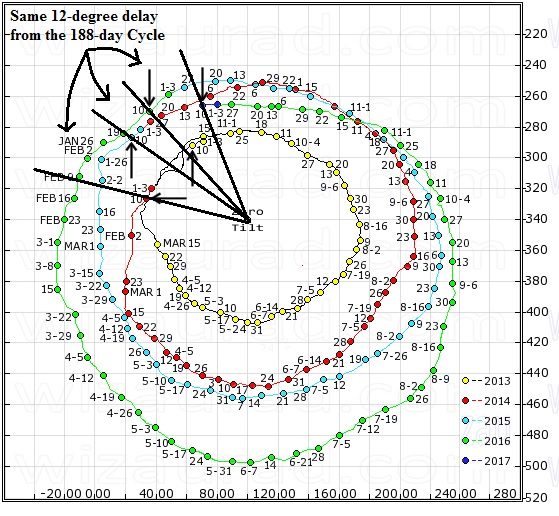 The migrating magnetic North Pole continues circling around the Zero Tilt location trailing last year’s position by the same twelve days we see in the Seismic Charts providing strong evidence that the 188-day cycle has been in place all along pointing to a May 20, 2017 Black Star/Earth magnetically-induced geological pole shift with this model currently having a ten percent chance of accuracy. The older Binary Star Repulsion Modeling says Earth will suffer another nearside-alignment quake event in the first week of May 2017 giving us another orbit cycle to prepare for what is coming from space in expectation of the crap hitting the fan in the spring of

2018. Each survival group leader must examine all the evidence from a range of sources for devising the best survival strategy possible based upon all the information and Group resources. Survival Groups are forming around the world as we speak for neutralizing all Black Star-related threats, by joining forces and resources raising the chances of survival for everyone involved.

Sybil has assumed the responsibilities/duties for running the Medical Operations Team servicing the Ozarks Survival Group Program, as Dr. Laura has been too busy to keep up with Medical Committee activities with too much on her plate. Tom and the Finance/Land Acquisition continues the land acquisition phase of our operation in the Ozarks near our fail safe cavern bugout location and hopefully will wrap up the negotiations soon allowing the Group to transition from the planning stage to the field operation stage of The Ark Mission Project. The first step in being connected to forming survival groups is to hit the subscribe button at http://terral03.com to receive your 2017 Subscriber Notification Email with the special Gmail email address where you write requesting your Threat Assessment Info. You then send me written permission to share your contact information with like-minded survivalists in your area and you will be connected for devising your best survival strategy possible by working together with those already awake about what is coming from space.

Project supporters for Week 2 of 2017 include Diane, Ollie, Marco, Greg, Lucien, Diane, Clifford, Robert, Jeffrey, Allmand, Marshall, Andrew, Fire, Adrian, Debbie, Bob, Guy, Ken, Michael, Robert, Michael, Patricia, Bernard, Ronald, James, William, Stephen, Walter, Sandy, Todd, Juan, Fred, John, Karina, Patricia and Bennet all going to http://terral03.com to receive full subscriber benefits for only 25 dollars per year. Steve, Joshua, Lucy, Tony, James, Tim, Wesley, William, Keith and John renewed subscriptions from previous years with Tom donating to the research. Remember that the first four 2017 Newsletter Volumes are uploaded to the 2016 Dropbox Folder for all newsletter subscribers/contributors allowing me time to send out the 2017 Subscriber/Contributor Notification Emails through this transition period. Survival Groups are growing, so be sure to request your Threat Assessment Information to begin the process of connecting with the forming survival groups in a real safe zone location for neutralizing all Black Star-related threats for when the crap hits the fan. Thank you again to everyone supporting the research for making the investigation and survival group programs possible. Terral

Read the Full Report and related articles using a complimentary link to Terral’s 2017 Newsletter Volume 2. Subscribe and support the research at http://terral03.com.