Seismic indicators say that Earth is nearing the end of the first earth change lull period for the 2016 Orbit Cycle relative to the inbound Black Star now positioned between the Virgo and Libra Constellations relative to the Sun.

Twenty two of the 5-magnitude earthquakes for Week 26 of the 2016 Orbit Cycle is exactly the same weekly total we saw last year for 2015 with far fewer of the 2.5 to 4-magnitude indicator quake events at just 190. We should not be surprised to see the sub-200 value for the smaller-mag quake events, as we saw the same thing for Week 22 and Week 23 of the 2015 Orbit Cycle leading to a bounce; until the minimum weekly values were reached around Week 30; when Earth reached the magical 90-degree outside-orbit position (O). We should expect to see a bounce in these weekly total values, until reaching the minimum values around Week 30, which is typical of what we have seen since the investigation began in January 2011.

Remember that Week 27 produced a 7-magnitude earthquake event for 2015 following the big event in Week 25 like we just saw happen again for the 2016 Cycle, so do not be surprised to see another of the larger-magnitude quake events even near the end of the current earth change lull period where Earth core is cooling down from the lengthening Black Star/Earth magnetic portal connection. We should see two sub-20 weekly total values for the 5-magnitude earthquake events around Week 30 that happened for the same week in 2014 and 2015, which is strong evidence that the lull period is ending and that we should expect a seismic uptick globally all the way around to about Week 45; when Earth passes behind the Sun relative to the Black Star.

Earth saw five new volcanic eruption events this week with focus again on Russia where we are seeing signs of rising magma plumes and pressurized magma seeking a pressure-relief mechanism in regional volcanoes. I am looking for this pressure to shift east into the Aleutians and then into Alaska later in the timeline once the next earth change uptick period moves into full swing mode and Earth core once again heats up from nearing Black Star/Earth proximity. 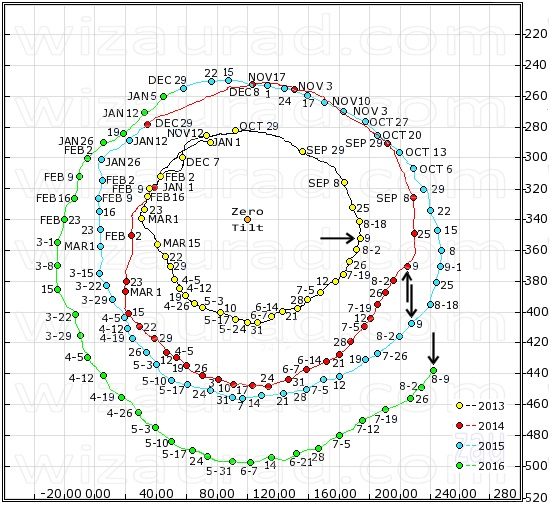 Earth magnetic North Pole made a modest move this week and is now trailing last year’s position by a little more than the expected three days that we see in the Seismic Chart between our nearside-alignment quake events for 2015 ( 7.8 Nepal 4.25.2015) and 2016 (7.0 Vanuatu 4.28.2016). Now we watch the magnetic North Pole to see if we have a 3-day lag in position from last year, or if that number is more like 12 days; which is the average number of days between our nearside-alignment quake events for the last decade since the big 9+ Sumatra Quake on December 26, 2004. I highly recommend you read this information (here) on the changes in the Chandler Wobble with anomalies showing up since this major earthquake event that the author incorrectly attributes to December 25, 2005. Good luck tracking down information on the Chandler Wobble Anomalies since 2006. There is some information here under the Earth’s Wobble Has Stopped subtitle. My interpretation of the evidence is that the Black Star is wrestling with our Sun for Earth Magnetic Polarity Control where our planet now has ‘two’ sources of electromagnetic influence across the entire spectrum, as the Black Star is siphoning solar electromagnetism from the Sun to become even more powerful than the cube of the closing distance.

Many thanks to Sandy and Jason for inspiring me to invest time in generating more seismic chart information to help subscribers recognize the two well-defined earth change uptick periods and lull periods for each Earth Orbit Cycle relative to the Black Star. You should recognize letter designations for outside-orbit position (O), the Sun/Earth/Black Star nearside-alignment quake events (N) and Earth/Sun/Black Star backside-alignment quake events (B) from the Seismic Chart above. Each Earth Orbit Cycle begins when Earth reaches the 90-degree angle relative to the Sun and Black Star like we see here on January 4, 2014. First we see the big Jolt (J in chart) that traditionally begins each new Earth Orbit Cycle once the Black Star/Earth magnetic portal connection begins to shorten, as our planet turns around in natural orbit of the Sun to make the move ‘towards’ the inbound Black Star. The nearside-alignment generally comes around Week 13-14 marking the peak of seismic activity. 2014 (in blue) was our biggest year for seismic activity with 2015 and now 2016 showing fewer events, as our planet is maintaining the appearance of equilibrium easier from the expansion/contraction process having great impact on our planet since about 2004. 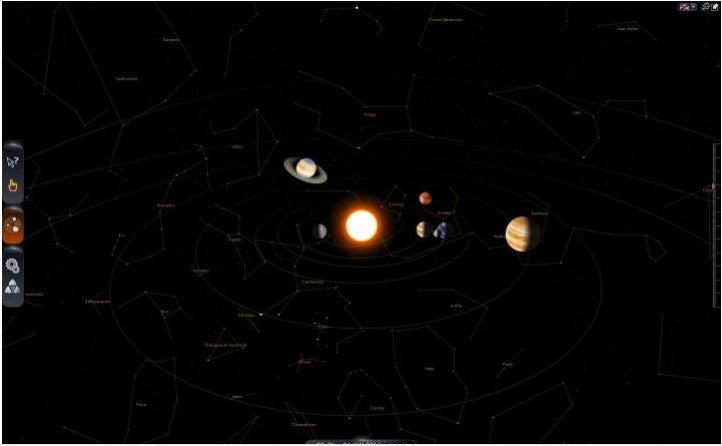 Draw a line from the center of the Virgo Constellation through the Sun to your observer position to then draw a 90-degree perpendicular line (from left to right) to realize Earth and Jupiter are both at outside-orbit position on this important date that started the 2014 Earth Orbit Cycle where the “O” appears in the 2014 Seismic Chart. That key start date for each cycle has moved an average of 12 days ‘later’ each calendar year, because the Black Star is moving left in the orbit diagram like all the planets in prograde fashion and our planet takes that much longer to move around the Sun to begin each new cycle. That is the reason we see 54 weeks for each Earth Orbit Cycle in the Seismic Chart rather than 52 weeks for the calendar year. Jupiter position on this key day began the earth change uptick period for the largest planet in our solar system, as Jupiter continues closing in on Black Star position moving left in the orbit diagram some 30 degrees each year.

This also explains why NASA sent the Juno Probe (NASA) to Jupiter in order to monitor the changes in Jupiter’s environment, as Jupiter’s core continues heating up for the ethane/methane/etc. to change from solids directly into gases that are changing Jupiter’s upper atmosphere and general complexion.

The 5-Magnitude Earthquake Chart (above) shows intense activity in direct proximity to the Sun/Earth/Black Star nearside alignment (N) for 2014 and 2015, which is typical going back to 2011. The anomaly here is revealed for 2016 where these moderate quakes peaked around Week 10. We see the same dips in the chart that begin/end each cycle with the sub-20 values showing up at outside-orbit position (Week 30) that comes each summer. Then we see a spike in activity for the earth change uptick period running from Week 30 to about Week 45, until everything drops off again to begin the next cycle at Week 54.

We see pretty much the same pattern for the 6-mag quake events with great focus around our nearside-alignment quake events (N) from Week 13-15 with an average of more than six weekly events. That weekly average for these moderate quake events then drops to around two near outside-orbit position. The anomaly here came in Week 34 of the 2015 Orbit Cycle with the big 8.3 Chile Quake that generated red values in the Seismic Chart for more than a month, as our planet had zero of the 6-mag quake events globally for the following five weeks. 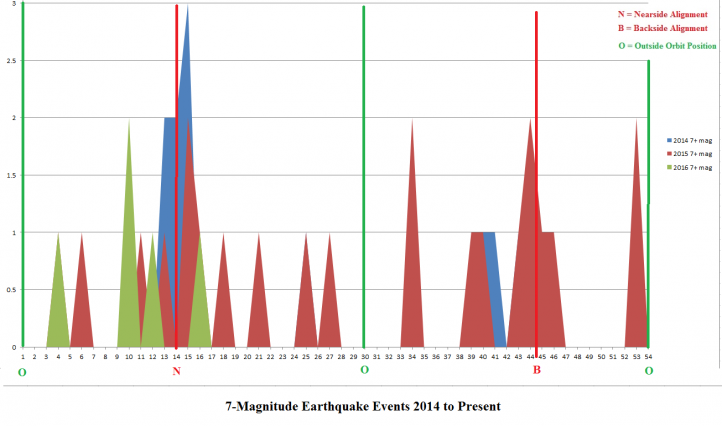 This chart has been shortened to fit on the page, but here is a link to your Dropbox Folder version (here) available for all valued 2016 Newsletter Subscribers and Contributors. If you are not a subscriber to Terral’s 2016 Newsletter with full subscriber benefits, then you might want to visit http://terral03.com and hit the subscription button that costs only 25 dollars per year. A look at this chart shows a big focus around our Sun/Earth/Black Star nearside alignment around Week 14. A look at the 2014/2015 Seismic Chart reveals that we actually had two of the big 7-quakes near our backside-alignment that somehow were not included in this chart; but the pattern remains pretty much the same. Note again that the big quake spike came ‘early’ for 2016, as the 188-day cycle is now broken, as the Black Star is slowing inbound orbital velocity from Binary Star Magnetic Repulsion that has changed everything for the Project Black Star Investigation. Earth must testify more in this case, before we can begin drawing definitive conclusions. The idea is to use this extra time for preparing for the worst-case scenario, while hoping for the very best. Remember again that all of this Seismic Chart information is preliminary and a work in progress. My expectation is to generate a series of Seismic Charts for 2013 to Present with color coding that matches the Migrating Magnetic North Pole Chart Data allowing newsletter subscribers to see the larger picture and the connection between changing Earth magnetics and the seismic pattern from our two well-defined earth change uptick and lull periods for Earth Orbit Cycle relative to the inbound Black Star.

Project supporters for this week include Mark and Melissa who pulled the trigger and subscribed to Terral’s 2016 at http://terral03.com to receive full subscriber benefits for the life of their subscriptions. Melissa is actually a former administrator for Terral’s Research Group disbanded in the spring of 2012 who has been supporting the research since February 2012. Chad and Janis renewed their subscriptions from previous years with Randi making another donation to the research. My thanks again to everyone supporting the Project Black Star Research at http://terral03.com for making the investigation possible. Terral

Read the Full Report and related articles using a complimentary link to Terral’s 2016 Newsletter Volume 32. Subscribe and support the research at http://terral03.com.