Seismic, volcanic and magnetic North Pole migration indicators say Earth is moving through the final stages of the second earth change lull period for the 2015 Earth Orbit Cycle relative to the inbound Black Star now moving through the Libra Constellation just below the ecliptic plane.

Contrary to what many critics are saying, year-over-year seismicity is actually lower than last year with 5-mag quake events remaining about the same. For those wondering, the 7.1 magnitude Alaskan Quake Event (USGS info) took place on Sunday and will be posted for Week 53 once the Seismic Chart is updated next Thursday for Volume 5 of Terral’s 2016 Newsletter. Remember that each Earth Orbit Cycle for the Seismic Chart begins 11-13 days ‘later’ each calendar year giving us 54 weeks for each cycle and the coming 2016 Earth Orbit Cycle relative to the Black Star begins once Earth reaches that magical 90-degree position in winter orbit relative to the Sun and Black Star in the Libra Constellation. The 2014/2015 Seismic Chart will conclude once Week 54 values are added to become final. I will create a PDF of the 2014/2015 Seismic Chart that will be placed in the 2016 Dropbox Folder for the link to be posted in each 2016 Newsletter. A new 2015/2016 Seismic Chart will then be posted with each new volume, as we watch the chart grow each week for the coming year.

The 402 value for the 2.5 to 4-magnitude earthquake events from Week 50 represented an anomaly not predicted by modeling from 2012-2014 weekly values earning the red designation. However, the prediction that this value would drop steadily each week to outside-orbit position is well on the way to being realized. The sharp uptick came from higher-than-expected seismic activity coming from the Oklahoma and Jamaican Quake Swarm Areas and the seismic/volcanic pressure shift associated with the tectonic plate cascade ‘away’ from the North American Crayton towards the Solomon Island Region from that plate breaking in two amid the big earthquake activity focused on February 6, 2013. These are precursor quake events connected to the two subterranean magma waves circling the northern and southern regions of the Pacific Ocean/Ring of Fire, but the activity is subsiding on schedule; as the two magma waves have reduced momentum, because Earth has been moving through this current earth change lull period where the Black Star/Earth magnetic portal connection has been lengthening to reduce Black Star/Earth electromagnetic potential causing Earth core to cool down through this period. All of that will change after the first week of February 2016 once our planet turns around in natural orbit of the Sun to begin heading towards the Libra Constellation.

Earth had just three new volcanic eruptions this week representing the first time we have seen this value below five since our planet passed behind the Sun relative to the Black Star on November 24, 2015 to produce the two 7.7 Peruvian Quake Events at more than 600 kilometers below the surface. The new volcanic eruption event locations include Nicaragua, the Chile/Argentina border and Kamchatka representing the regions where these two subterranean magma waves have stalled along the Pacific Ocean/Ring of Fire. Watch for new volcanic activity to go back on the uptick with the coming earth change uptick period moving from Kamchatka through the Alaska Quake Swarm Area down through the Cascadia Subduction Zone and up from South America to Mexico once these deep magma waves regain momentum, until they eventually converge at the widening California Quake Swarm Area that has pretty much become the US West Coast Quake Swarm Area reaching already into and through Yellowstone. 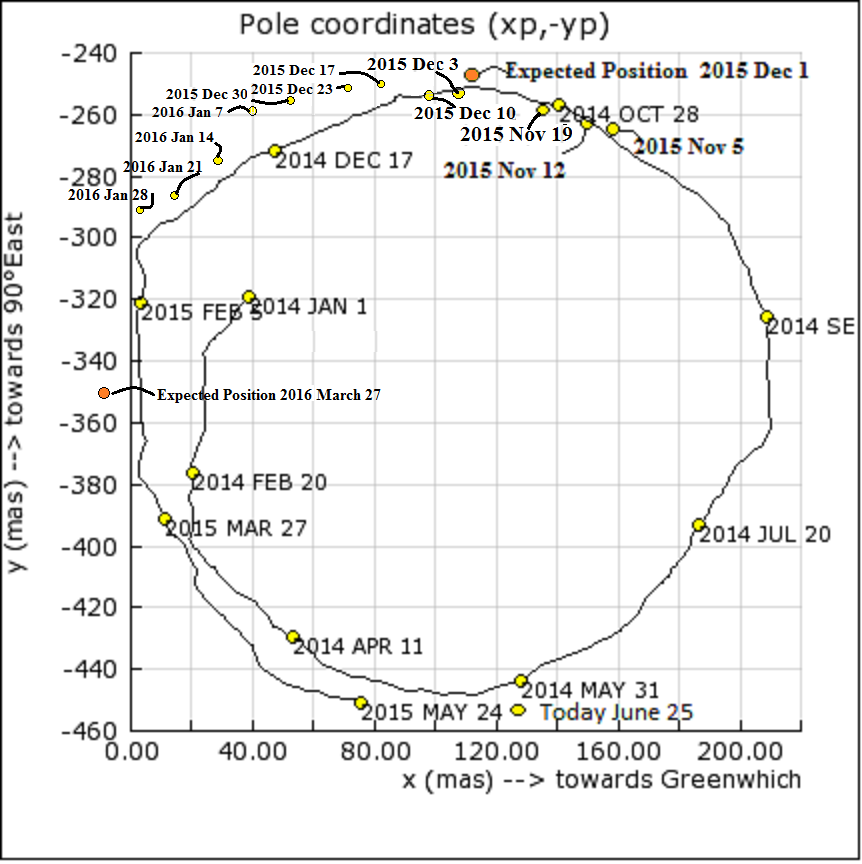 The Migrating Magnetic North Pole Location should cross the 0.00 X (mas) line (on left) here in a few days to then make the big dip towards the Expected Position 2016 March 27 trailing last year’s path location by the expected 11-13 days, because the Black Star has moved that many degrees ‘left’ in the orbit diagram and our planet takes that much longer to come around in orbit. I anticipate being able to draw a straight line from the date starting the 2014 Earth Orbit Cycle (around Jan 5th) and the 2015 Earth Orbit Cycle (around Jan 19th) to the date beginning the 2016 Earth Orbit Cycle in the first week of February 2016 that will intersect the center of this chart representing the average Magnetic North Pole Location for the last three years.

The probable Black Star Event Timeline with future dates appears in the “Help” feature article below submitted by David. We really need to move beyond outside-orbit position for that date to become finalized, before we can rule out inferior models running in the background in favor of the recently-developed Binary Twin Reverse Polarity Repulsion Model explaining how the Black Star has been slowing down reaching the inner solar system to produce a regular seismic/magnetic North Pole migration pattern actually defying the Laws of Physics as we currently know them. Right now the modeling says our planet will experience another Sun/Earth/Black Star nearside-alignment quake event with associated X-class flares on May 7, 2016 within a very small event window. Then Earth sees a Black Star/magnetically-induced Geological Pole Shift on May 20, 2017 with insufficient space in the orbit diagram for a 2018 Earth Orbit Cycle. The second feature article could prove very important to the Project Black Star Investigation with a company called Thunder Energies based very near my location here in Florida. My email to Thunder Energies appears under that feature article and hopefully we hear from them soon. This newsletter volume includes section titles to try and give more structure to article content, which will likely evolve to become better moving forward.

Project supporters for this week include Cathal who renewed his subscription to Terral’s 2016 Newsletter with Randi making a nice donation. Jackie, Roger, Tony and Michael have so far chosen not to renew their subscriptions. Find links to recent radio shows in the Radio Section on the final page of each newsletter. Thanks again to everyone supporting the research making this investigation possible. Terral

Read the Full Report and related articles using a complimentary link to Terral’s 2016 Newsletter Volume 4. Subscribe and support the research at http://terral03.com.