Seismic indicators say that Earth is passing through a mini-lull period within the current earth change uptick period that started in the middle of August and expected to run through November 2017. The Black Star is currently positioned on the right side of the Libra Constellation relative to the Sun, as our planet is expected to pass behind the Sun relative to the Black Star in the third-to-fourth week of November 2017.

The sixteen value for the 5-mag quake events represents only the second time in the last fourteen months that Earth as seen fewer than seventeen of these moderate earthquake events. This 173 value for the 2.5 to 4-mag earthquake events is the second lowest weekly number we have seen since the tectonic dynamic reset following multiple Solomon Island earthquake events that cracked the tectonic plate in two on February 6, 2013, when this weekly value was only 107. The only other week with these kinds of extremely low seismic values came in Week 34 of the 2014 Earth Orbit Cycle that look eerily similar to what we see now for Week 35 of the 2016 orbit cycle.

Click on the Equake3D Image link above and follow along, as I connect the dots to help you recognize what is happening with the seismic patterns. The deep earthquake activity down in Earth mantle transition zone (link) continue in the Fiji Islands region, but the deep quake activity we saw last week in South America has stopped for the time being. The 5-magnitude earthquake events expected to begin off the Mexico West Coast has started farther north than I expected with this event (10.13.2016) just today that followed these three events that you see along a line reaching down towards Antarctica (10.6.2016, 10.7.2016 and 10.8.2016). These 5-magnitude earthquake events appear connected to the rising magma plume phenomenon (LiveScience.com and Vol. 28) shown in this diagram (here). The diagram shows the rising magma plume activity stretching across from Indonesia through Fiji pointing directly at the Chile region in South America. Look at the right side of the rising blob to realize a deep magma wave is rising along this same line from our 5-magnitude earthquake events that I fully expect to continue through the current earth change uptick period, as Earth core is heating up and amplifying the rising magma plumes that have yet to reach Earth crust. While these 5-mag quake events are not yet deep, they are indicators of bulging taking place; as precursor events before a tectonic storm coming on the horizon!

Earth saw five new volcanic eruptions this week with focus on the northern deep magma wave currently pushing between Japan and Kamchatka that should see seismic/volcanic pressures shifting towards the Aleutians later in the timeline. The new volcanic eruption in Mexico is a warning sign that the deep magma wave pushing up from South America through Central America is heading north towards the proliferating California Quake Swarm Area where the 5.2 magnitude earthquake event struck just this morning, which should wake up some of the California/Arizona Geologists to the facts about intensifying seismic/volcanic pressures shifting into the southwestern United States in the coming weeks like these three recent stories from October 2016 (here). My gut feeling is that seismic/volcanic pressures will continue shifting towards the widening California Quake Swarm Area that has already become the US West Coast Quake Swarm Area with more and more News coming about the bulging Yellowstone Reservoir and Magma Chamber like this one from April of this year. 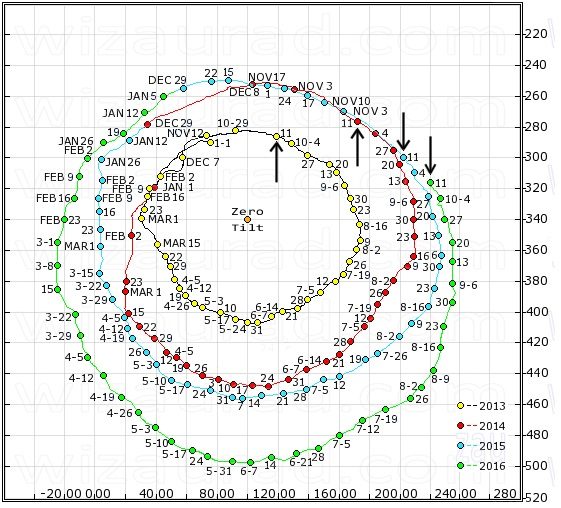 The migrating magnetic North Pole continues following the same path as the last two years moving about the same distance as this same week of 2015. The magnetic North Pole is trailing last year’s position by the same eight days or so that we saw for last week and expected to cross the 2014 (in red) and 2015 (in blue) migration paths by the end of October 2016. We are monitoring the magnetic North Pole migration pattern carefully to see which day the green line reaches the very top of the chart that should be within a week of our predicted Earth/Sun/Black Star backside-alignment quake event currently scheduled for the last week of November 2016. Last year’s prediction date of December 1, 2016 was hit directly on target. If the current migration pattern holds true, then we should see the green line reach the top of the chart around December 5, 2016, about a week after the predicted quake event. We shall see.

My TradCatKnight interview with Eric from Tuesday October 11, 2016 was converted to a YouTube Video (here) with my mp3 recording link here for those interested. There is really no comparison between the Steve Olson WSO interviews and the TradCatNight interview where my message was met by anything but acceptance of the Science-based information proclaiming very clearly that we have an interloper/intruder in the inner solar system. The WSO subs literally flooded me with weeks of new subscribers and supporters for the research with many people writing for threat assessment reports and with permission to share their contact information with other like-minded survivalists. The TradCatNight YouTube Channel has thousands of more subs than Steve Olson’s WSO Channel and my interview with Eric has been watched by more than 50,000 of his subs, but to date the evidence seems to indicate that just one of those subs was interested enough in my Project Black Star Investigation to hit the Subscribe Button at http://terral03.com making me scratch my head and wonder. The primary difference I did notice in the approach of Steve versus Eric is that Steve was more open to the Science and new ideas that he had never seen before, while Eric tended to be more argumentative and defensive of his already-established positions/conclusions based very much on Roman Catholic Church dogma than anything to do with Science at all; rather than taking a neutral stance and allowing all of the information to be shared and allowing the radio listeners to make up their own minds.

Project Supporters for this week include Robert, Samuela, Cass, Martin, Jay, Glenn, Steven, Mike, Wayman, Dewey, Anne, George, Christina, Susi, Crystal, Karen and Trevin. Only Karen subscribed since the TradCatKnight interview with Eric, which means if she is not a TradCatKnight sub who listened to Tuesday’s interview, then my batting average is zero for more than 50,000; which seems statistically impossible (scratching head over the math). Only Blair renewed his subscription from previous years for Week 41 with Robert and Randi making donations to the research. Many thanks to everyone supporting the Project Black Star Research for making the investigation possible. Terral