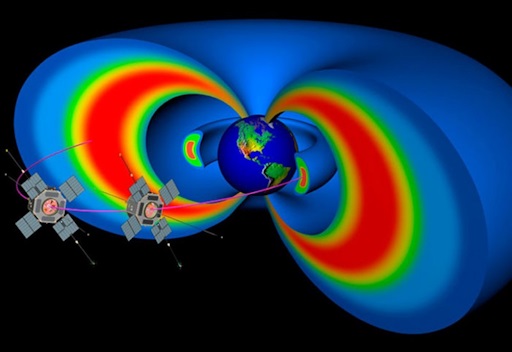 Co-author Phil Erickson of MIT’s Haystack Observatory explains: “As Van Allen discovered in the 1950s and 1960s, there are two radiation belts surrounding Earth with a ‘slot’ between them. Our research is focused on the the outer radiation belt, which contains electrons with energies of a million or more electron-volts. These ‘killer electrons’ have the potential to damage spacecraft, even causing permanent failures.”

During strong geomagnetic storms, the outer radiation belt expands, causing the killer electrons to approach Earth. But NASA’s Van Allen Probes, a pair of spacecraft sent to explore the radiation belts, found that something was stopping the particles from getting too close.

“The penetration of the outer belt stopped right at the same place as the edge of VLF strong transmissions from humans on the ground,” says Erickson. “These VLF transmissions penetrate seawater, so we use them to communicate with submarines. They also propagate upward along Earth’s magnetic field lines, forming a ‘bubble’ of VLF waves that reaches out to about 2.8 Earth-radii–the same spot where the ultra-relativistic electrons seem to stop.” 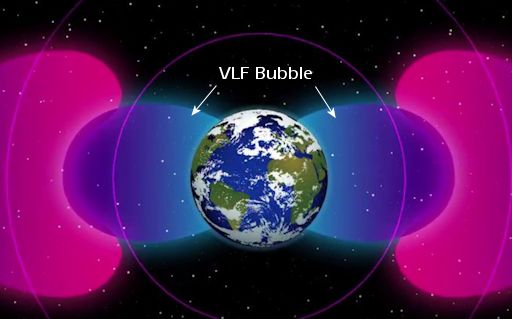 VLF radio waves clear the area of killer electrons “via a wave-particle gyro-resonance,” says Erickson. “Essentially, they are just the right frequency to scatter the particles into our atmosphere where their energy is safely absorbed.”

“Because powerful VLF transmitters have been operating since before the dawn of the Space Age, it is possible that we have never observed the radiation belts in their pristine, unperturbed state,” notes the team, which includes John Foster, a colleague of Erickson at MIT and a key leader of this research, along with Dan Baker at the University of Colorado Boulder.