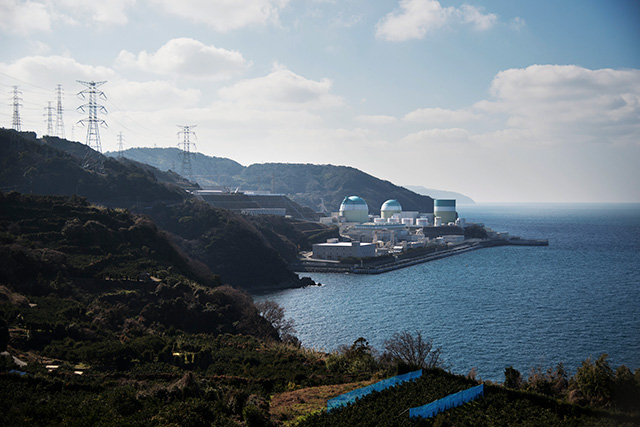 EDITOR’S NOTE: I hope this article is not overlooked. It helps in the fight to stop a very serious and REAL topic from being swept under the rug.

While this statement might sound overdramatic, Gundersen may be right.

Several nuclear reactor meltdowns in the plant, which at the time forced the mandatory evacuations of thousands of people living within a 15-mile radius of the damaged power plant, persist, and experts like Gundersen continue to warn that this problem is not going to go away.

“The fuels are now a molten blob at the bottom of the reactor.”

The March 11, 2011, 9.0 earthquake that destroyed the cooling systems at TEPCO led to hydrogen explosions and reactor meltdowns, and has left exposed highly radioactive materials that Gunderson says are the root of the problem. For now, there is no solution in sight.

“Fukushima has three nuclear reactors exposed and four fuel cores exposed,” Gundersen said. “You probably have the equivalent of 20 nuclear reactor cores because of the fuel cores, and they are all in desperate need of being cooled, and there is no means to cool them effectively.”

This persistent problem reared its head yet again in December 2015, when TEPCO was forced to deal with a massive amount of highly radioactive water generated by having to cool the reactors and exposed fuel cores Gundersen mentioned.

TEPCO must now transfer between 200 and 300 tons of groundwater into highly contaminated reactor buildings, having been unable to devise an effective plan for keeping the groundwater from continuing to flow under the plant.

“The problem is how to keep it cool,” Gundersen explained. “They are pouring in water and the question is what are they going to do with the waste that comes out of that system, because it is going to contain plutonium and uranium. Where do you put the water?”

The company has repeatedly come under fire for periodically dumping large amounts of radioactive water into the Pacific Ocean.

Even though the plant has not been online since it was largely destroyed in 2011, fission products such as uranium continue to generate heat, and therefore require cooling.

“The fuels are now a molten blob at the bottom of the reactor,” Gundersen said.

Shortly after the plant was damaged, TEPCO announced that they had experienced a “melt through,” which means a melted reactor core had melted through some layers beneath it.

That left several highly radioactive blobs that now have water on top of them, hence causing the water to become extremely radioactive. This process of cooling the cores has now generated hundreds of thousands, if not millions, of tons of highly radioactive water that then must be dealt with somehow.

“Most of the time TEPCO seems to be firefighting, discovering leaks here and unexpectedly high levels of radiation there.”

Dr. M.V. Ramana, a physicist and lecturer at Princeton University’s Program on Science and Global Security and the Nuclear Futures Lab, says the problem is the lack of a real long-term plan for addressing the issue.

“Most of the time TEPCO seems to be firefighting, discovering leaks here and unexpectedly high levels of radiation there,” Ramana told Truthout. “In part, this is because TEPCO’s plans do not account for the many possibilities of failure and putting in place backup safety systems.”

Dr. Helen Caldicott, an author and anti-nuclear advocate who has established several foundations that oppose the use of nuclear power and weapons and depleted uranium munitions, told Truthout that the situation in Fukushima is “very serious indeed.”

“There is no way to prevent the radioactive water [from] reaching the western shores of the North American continent and then circulating around the rest of the Pacific Ocean,” Caldicott said. “At the moment, it seems like this is going to occur for the rest of time.”

A declassified report from the US Nuclear Regulatory Commission written immediately after the disaster began states that massive amounts of radiation from the plant were released into the atmosphere early on.

“There are no safe levels of radiation for biological systems.”

As Caldicott warned, radiation from Fukushima along the US West Coast is expected to continue to worsen.

According to a 2013 study by the Nansen Environmental and Remote Sensing Center in Norway, the first radioactive oceanic plume released by Fukushima is likely to hit the US’s West Coast in force in 2017, with levels expected to peak in 2018. According to the report, the majority of the radioactive material from the disaster is expected to stay concentrated along the West Coast through at least 2026.

Even though that plume hasn’t yet hit, the spread of radiation has already been substantial. Professor Michio Aoyama of Japan’s Fukushima University Institute of Environmental Radioactivity believes the amount of radiation that has now reached North America is probably nearly as much as was spread over Japan during the initial disaster.

A recent Woods Hole study shows a 50 percent increase in radiation levels 1,600 miles west of San Francisco, but states that the levels are still far below what the US government considers dangerous.

However, Caldicott takes issue with what the United States considers a “safe” level of radiation exposure.

“There are no safe levels of radiation for biological systems,” she said. “That terminology is used by the nuclear industry to cover their inevitable radioactive releases.”

Ramana believes it could still take decades before the plant’s radiation leaks are even contained.

“I think this is going to take a couple of decades,” he said. “We are still in the early years; it hasn’t even been five years since the disaster started. It has been 30 years since Chernobyl and remediation of that site is still [a] work in progress.”

Disconcertingly, Ramana does not believe there is a “true solution” to the crisis. When asked how TEPCO and the Japanese government are likely to handle the crisis, he said, “What we will get is TEPCO and other Japanese authorities muddling through this completely unprecedented situation.”

Ramana pointed out many reasons why he believes people should pay attention to what is happening in Fukushima, and started by correcting the belief that the disaster “occurred” and is now over.

“March 2011 was just the beginning of the disaster, which is still unfolding,” he said. “As something that is unfolding, one should be concerned about how the situation is being managed.”

He added that since this is an ongoing crisis, people need to remember how challenging it is to deal with a nuclear accident, and that this should cause people to be skeptical of “safe” nuclear power more broadly.

“TEPCO’s actions should serve as evidence that organizations that seek to profit from running a nuclear plant are not always the best ones to manage accidents or cleanup,” Ramana said. “Likewise, its actions prior to the accident, wherein it made decisions that maximize its short-term profits while not making decisions that would have promoted safer operations (or shutting down the reactor), are emblematic of a number of other utilities, all of whom have conflicting priorities. That TEPCO is the organization that experienced such a major accident while others have escaped, at least so far, is at least in part a matter of luck.”

Gundersen told Truthout he had seen data that revealed radioactive hot spots further away from Fukushima than the radiation from Chernobyl had reached after that disaster.

“And the amount of radiation in many of them was the amount that caused areas to be declared no man’s land for Chernobyl,” he said. “You can’t clean all this up. We still have radioactive wild boar in Germany, 35 years after Chernobyl.”

Radioactive water from the Fukushima disaster continues to be released into the Pacific, and spread around the globe.

Of this, Caldicott warned, “There is a system of biological magnification by orders of magnitude at each step of the food chain: algae, crustaceans, little fish, big fish.” That means that the radiation’s impact on the planet’s ecology expands the further it moves up and across the food chain.

Meanwhile in the United States, the nuclear industry continues apace.

“With Three Mile Island and Chernobyl, and now with Fukushima, you can pinpoint the exact day and time they started, but they never end.”

Nuclear operator Exelon Corporation was among Barack Obama’s biggest campaign donors, and is one of the largest employers in Illinois where Obama was a US senator. Exelon donated more than $269,000 to his political campaigns, and Obama appointed Exelon CEO John Rowe to his Blue Ribbon Commission on America’s Nuclear Future.

Yet the Fukushima disaster, which, as Ramana points out, is just beginning, stands as a reminder of the dire consequences of continuing to allow the nuclear industry to grow. This reminder will remain with us indefinitely.

“With Three Mile Island and Chernobyl, and now with Fukushima, you can pinpoint the exact day and time they started,” Gundersen said, “but they never end.”

In Japan, US citizens living there who were located within a 50-mile radius of the Fukushima plant were required to evacuate. Within the United States, more than 120 million people live within a 50-mile evacuation zone of a nuclear plant.

Meanwhile, officials from TEPCO have admitted they are not sure when their company might be able to solve its multitude of problems, and begin to reduce the amount of contaminated water at the plant. When it comes to the nuclear industry, it seems, it is always difficult to determine when a disaster will end – or if it will end at all.