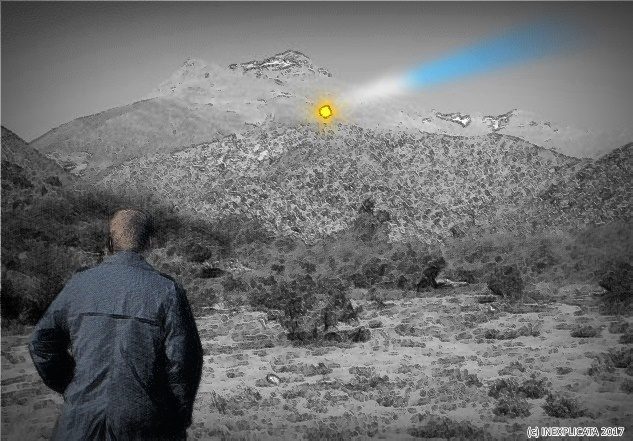 Each year, on October 7, the residents of the Paihuano commune recall one of northern Chile’s most significant and controversial UFO events: the alleged UFO crash against Cerro Las Mollacas.

This mysterious event began on the hot afternoon of 1998 when many witnesses claimed having seen a silvery object colliding only meters away from the summit of this mountain.

From that moment onward, numerous witnesses were interviewed by local and national media and some UFO researchers from the capital city allegedly saw a strange glow on the slopes of Las Mollacas. Raul Flores was among them. He said he had never seen anything so strange before. “I could see the object on the mountain. It resembled a metallic disc reflecting the sunlight with a glint of metal. Others saw it as well. I’m sure of what I saw. It wasn’t the sun shining against rocks or anything similar,” he explained.

Marco Antonio Gallardo, a well-known broadcaster, said the object “[approached the summit] with smoke, it was cylindrical and measured some 3 to 4 meters in diameter, and was red in color.”

On October 9 of that year, a group of civilians and Carabineros officers from the Paihuano barracks reached the site without finding remains of the object or any abnormalities. The place where the UFO allegedly crashed is hard to reach and the trip takes nearly six hours. The Carabineros reached the site again the following day, this time accompanied by personnel from the Serena PAE and according to some witnesses, also by elements from the GOPE (Special Operations Group) based in Santiago. A horse called ‘Calambrito’ died as result of the strain. This was confirmed by Cesar Uribe, a retired Carabinero who now lives in the commune of Coquimbo. Nothing was ever found in the vicinity. However, there was much speculation about the presence of the Chilean army in the area. There was also talk of helicopters or heavy trucks that ascended to the location through the rear of Cerro Las Mollacas.

The first official explanation delivered was that a “stone painted white” was involved. This was immediately rejected by all witnesses, since many had lived in the area for many years and had never seen such a stone.

The other explanation was offered by the Cerro Toledo observatory. Arturo Gomez, an astrophotographer, noted: “Everything points to a bolide, that is to say, a meteorite that did not strike the Earth’s surface, but rather broke into pieces in the upper atmosphere, accompanied by a loud report and brightness.”

Gomez further added that he “fully rejected the possibility that the object that exploded over the Vicuña commune could be a manmade craft, such as space junk, since these devices do not explode or produce light due to their reentry speed. They burn up without further ado.”

Journalistic activity did not stop for many years after the incident on October 7. Correspondents for television stations and live reports were the norm. Many tourists also visited the area, drawn by the story. The interest shown by researchers of the phenomenon caused the communal authorities to issue a decree devoting a week in October to popularization activities on the mystery in local schools and cultural institutions.

Now, 19 years after the event, Juan Castillo, one of the country’s foremost researchers and the author of several books on the UFO subject, told LA REGION that the case should be reopened to carry out a more thorough investigation into the Cerro Las Mollacas event.