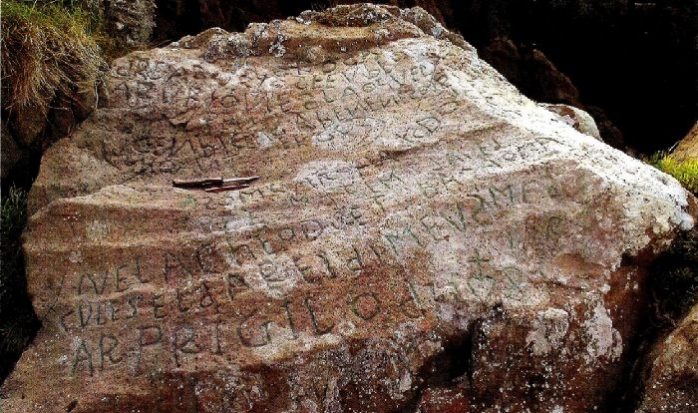 A strange message carved in to a rock in a village in France has led to an offer of a cash reward to anyone who can decipher it.

Situated on a remote beach near the village of Plougastel, the enigmatic inscription features a peculiar combination of reverse, upside-down and foreign lettering that nobody has been able to decipher.

One of the few readable sections of the writing includes two dates – 1786 and 1787 – suggesting that the message was written a few years before the French Revolution.

The text is also accompanied by the image of a ship with sails, as well as a sacred heart symbol.

Some historians have suggested that the writing might have something to do with the construction of naval defenses in the nearby area, however it remains impossible to know for sure.

“We’ve asked historians and archaeologists from around here, but no-one has been able to work out the story behind the rock,” said the town’s mayor, Dominique Cap.

“So we thought maybe out there in the world there are people who’ve got the kind of expert knowledge that we need. Rather than stay in ignorance, we said let’s launch a competition.”

A reward of 2000 Euros ( $2,248) is now being offered to anyone who can solve what has become officially known as “The Champollion Mystery at Plougastel-Daoulas.”

A (French) news report featuring close-up images of the inscription can be viewed below.