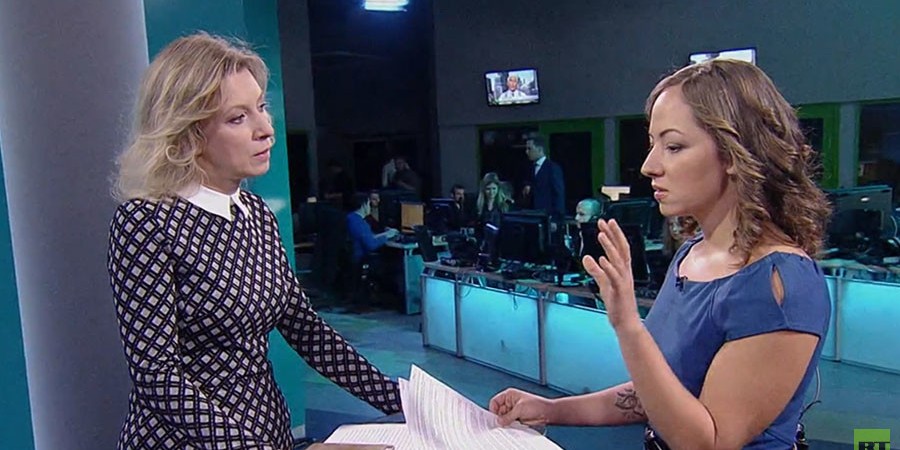 Russian FM Spokeswoman on RT: ‘We Did Not Bomb Children’s Hospital in Syria – This is Western Propaganda’

The host of RT’s InTheNow show asked the Russian Foreign Ministry’s spokeswoman some tough questions during a 26-minute interview.
Anissa Naouai wanted to know if Russian media are following a narrative from the Kremlin to counter BBC and CNN propaganda, and what is the difference between Russia supporting the Syrian opposition to the US doing the same.

“Things right now don’t look so good on the continent. Why has this become possible?” Anissa Naouai started off the interview.

“The world situation in general is not limited to one region or one continent,” Zakharova pointed out, admitting that “things are only getting worse” and “everyone knows” what countries are to blame for the current state of affairs. She mentioned the refugee crisis and the upsurge of terrorism as being among the consequences of those countries’ decisions to “revise the fundamental principles of international relations and interaction between nations.”

“I don’t mean to sound ominous, but, like I said, these are just the early signs of things to come,” the Foreign Ministry spokeswoman said, adding that the world is in need of “proper system of international law.”

The debate starts escalating as the TV show host touches upon the US making no secret that Russia is a “major threat” and provides a series of video extracts with top US officials speaking on Russia aggression as a proof. Looking at the situation from a different angle, Zakharova suggests the US “wants to create the impression that they perceive Russia as a threat” and what it does is merely “a typical propaganda campaign,” involving “government agencies, prominent newsmakers, major media organizations.”

Anissa shows another set of videos featuring Russian news anchors, denouncing the US and calling it a way to “answer the propaganda of CNN and BBC.”

Zakharova says that this kind of rhetoric is coming from individuals “as a response to the things we hear from the West”, but the Foreign Ministry doesn’t “share their extreme views.”

“When Mr. McCain starts talking about Russia the way he does, and Western media make films about Russia launching nuclear strikes against Europe, and NATO officials, like Stoltenberg or his predecessor, announce that they are going to boost their defense spending to contain Russia, what kind of reaction do they expect from some of the people in Russia?” Zakharova explained quite emotionally, shrugging off the idea that Russian media outlets’ strong statements are coming from the government and saying that media in Russia is “free”.

When asked about the kind of cooperation existing between the US government and the media, the FM spokeswoman made it clear that, in her opinion, American journalists intentionally ignore the news the US authorities are not interested in. She gives an example of humanitarian crises in Syria and Ukraine with the former being extensively covered in the western media now while the importance of the latter is significantly downgraded.

“Either you are incompetent as a journalist, or there’s someone behind you pulling the strings. There’s no other option,” the spokeswoman said.

Expanding on the Syrian issue, Zakharova also noted that the only reasonable explanation for US actions is that it is trying to “destabilize the region as a whole” since their strategy keeps changing and it is impossible to understand it.

Another hard question Zakharova had to face was about “why Russia was against helping the Syrian opposition for many years and what changed?”

She responded saying that Russia supports “the groups that fight against terrorists, not the regime” while having “the official consent from Damascus.”

“We have no time for political games. Terrorists are already among us… we could continue competing with each other trying to figure out who is the coolest… but in reality we are running out of time because tomorrow they will come to somebody else’s house,” Zakharova said.